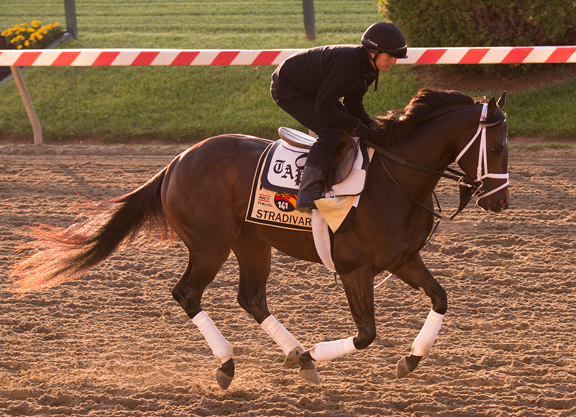 Stradivari (Medaglia d'Oro–Bending Strings, by American Chance), who earned 'TDN Rising Star' status with a 14 1/2-length tour-de-force in a Keeneland allowance in April, suffered a lateral condylar fracture and an axial sesamoid fraction when galloping out following a five-furlong workout Friday morning at Saratoga, spelling the end of his racing days.

“He's comfortable, stable in a support cast and bandage,” trainer Todd Pletcher told the TDN's Mike Kane. “Basically, they are just going to evaluate him over the weekend. It's definitely a career-ending injury, but depending on how they assess the structure around there and the blood supply and the blood vessels, and as long as there is no clotting, they are optimistic that they can do a surgery on Monday that would kind of fuse the ankle with a plate and some screws. Hopefully we can go forward with the surgery and save him as a stallion prospect.”

Bred in Kentucky by John D. Gunther from his multiple graded-stakes winning and multiple Grade I-placed mare Bending Strings, Stradivari was retained by Gunther after failing to meet his reserve at the 2014 Keeneland September Yearling Sale and the athletic dark bay crushed a field of Gulfstream maidens by 11 1/4 lengths at second asking last December (video). An interest in the colt was subsequently sold to Michael Tabor, Derrick Smith and Sue Magnier and Stradivari ran a hole in the Lexington wind in April (video), streaking home to earn a spot in the field for the GI Preakness S. A creditable fourth, beaten just four lengths by Exaggerator (Curlin) at Old Hilltop, he was last seen finishing fifth in the GI Belmont S. Stradivari was expected to kick off the second half of the season in the Curlin S. Aug. 6.

Bending Strings is the dam of a yearling filly of this year by Bernardini, a colt foal by Tiznow and was most recently bred to Uncle Mo.