'Storming' to Another Turf Sprint Victory 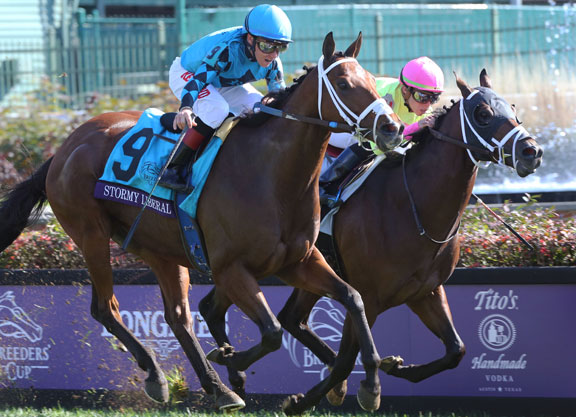 Just three days ahead of America's mid-term elections, the 'liberals' have already dropped a marker.

Let go at a very enticing 7-1 to successfully defend his title in an interestingly bet renewal of the GI Breeders' Cup Turf Sprint, Rockingham Ranch and David Bernsen's Stormy Liberal (Stormy Atlantic) clawed back favored World of Trouble (Kantharos) in the final few strides to put them back-to-back. Disco Partner (Disco Rico) would have found the prevailing underfoot conditions far from ideal, but ran on gamely to finish third, albeit a country mile off the top two.

Stormy Liberal, a 4-1 chance on the morning line, but relegated to third favoritism given the overwhelming pari-mutuel support for World of Trouble, hit the ground running and led the Turf Sprint field through the opening exchanges. World of Trouble was just outfooted early on, and Havana Grey (Ire) (Havana Gold {Ire}) and Chanteline (Majesticperfection) helped fuel the early pace over ground advertised on screen as good, labeled yielding in the official chart and riding a bit slower than that in real terms.

Approaching the end of the opening quarter mile, which was clocked in :22.50, Drayden Van Dyke ceded the lead aboard Stormy Liberal, first for a stride or two to Havana Grey, before World of Trouble took it up entering the turn. Richard's Boy (Idiot Proof), who completed a Rockingham one-two at Del Mar last year, also went forward, allowing Stormy Liberal to edge to the outside and into the clear. World of Trouble, trying older foes for the first time, was still going well on what was likely the worst part of the surface and took the field into the lane, but Stormy Liberal was finding his best stride three wide outside of his stablemate and the battle was joined. World of Trouble battled on tenaciously under a left-handed stick from Irad Ortiz, Jr., clinging to the slimmest of leads, but Stormy Liberal, who has made a habit of cutting it close in his victories this year, called yet again on that never-say-die constitution and reeled in World of Trouble in the dying strides. Disco Partner, last year's third-place finisher, managed to find his way to the center of the track in the stretch and rallied admirably enough while never a danger to the top two.

“He broke really sharp,” said Van Dyke, riding his first Breeders' Cup winner. “I knew there were a few who were going to be a little bit faster than me. I bided my time and let them get by me, then just tipped him outside. From there on, it was up to him to do the running. Stormy Liberal likes to hang on horses and not pass them, but he got him. It was awesome.”

About a month after last year's Turf Sprint, many of Peter Miller's horses were caught up in the San Luis Rey wildfires, though Stormy Liberal had been sent to Hong Kong and was not among them.

“The emotions and the highs and lows I have gone through in this game in the past year are indescribable,” he said. “I am just thankful to be back here. It is amazing to win this race two years in a row with this horse. It is a dream come true.”

Ortiz, Jr. was happy with the performance of the runner-up.

“He had no excuse. He just got beat by a nice horse,” the rider commented. “He wanted to fight, but he lugged in a little bit so I wanted to be close to Stormy Liberal so he could feel (the competition). No excuse.”

While he was winning the 2017 Turf Sprint off a June layoff, it had been a much smoother 6-year-old season for Stormy Liberal, whose lone subpar effort came when a troubled sixth, beaten only two lengths, by Disco Partner in the GII Jaipur S. at Belmont Park June 9. A near-miss second in the G1 Al Quoz Sprint earlier in the year, Stormy Liberal returned to California and was entering his title defense off narrow scores in a July 25 optional claimer at Del Mar, a defeat of Richard's Boy in the Aug. 17 Green Flash H. and a measured tally from another stablemate, Conquest Tsunami (Stormy Atlantic), in the GIII Eddie D. S. down the hill Sept. 28.

Stormy Liberal is one of seven Grade I winners and one of 105 black-type winners for his now 24-year-old sire who resides at John Sikura's Hill 'n' Dale Farm. Stormy Liberal's immediate female family has not only been successful at the track–with three siblings having earned black-type–but it has also been commercially appealing. Stormy Liberal's GISP full-brother Coast Guard was a $300,000 Keeneland September graduate in 2006, while Shimmering Moment, a stakes winner in Ireland and multiple graded-placed in this country, fetched $280,000 as a KEESEP yearling. The stakes-placed Garifine was a $105,000 buyback at KEESEP in 2005 before topping the 2006 OBS March Sale on a bid of $1.8 million from the late Buzz Chace. Stormy Liberal's 3-year-old half-brother Leinster (Majestic Warrior) was second in a Nov. 1 maiden special weight at Churchill and he has a weanling half-brother by Distorted Humor. Vassar was most recently covered by Uncle Mo.