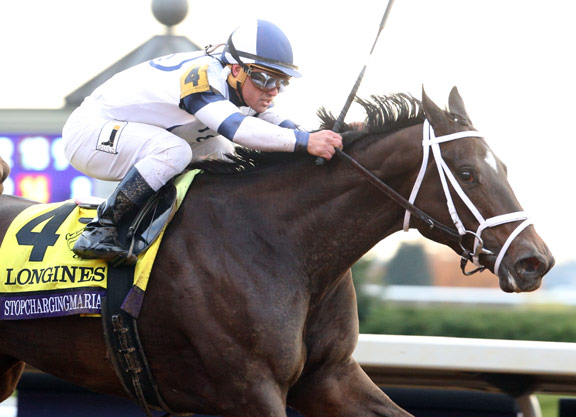 Town and Country Farms' Stopchargingmaria (Tale of the Cat) overcame a very wide trip and a stewards' inquiry to defeat California raider Stellar Wind (Curlin) in the $2-million GI Longines Breeders' Cup Distaff, the main event on Ladies' Day Friday at Keeneland. Curalina (Curlin) made a middle move into contention on the backstretch and stayed on well in the final half-furlong to complete a 1-3 finish for the Todd Pletcher barn, successful earlier in the day with 'TDN Rising Star' Liam's Map (Unbridled's Song) in the GI Dirt Mile. The first two across the line appeared to bump two or three times in the latter stages of the race, but after a lengthy debate, stewards ruled there was insufficient evidence to make a change. “You always get scared when this happens because it's such a big race and you don't want to get taken down, but I did nothing wrong,” Javier Castellano explained. “My horse ran a great race and I kept a straight path and was keeping the horse straight.”

Originally a $220,000 purchase by Mike Repole out of the 2013 OBS March Sale, having fetched $47,000 as a Keeneland September yearling the previous fall, Stopchargingmaria was a dual graded winner and twice Grade I-placed at two and really took flight during the middle of 2014, grinding out a win in the GII Black-Eyed Susan S. ahead of a five-length tally in the GI CCA Oaks. She entered the discussion for an Eclipse Award with a hard-fought victory in the GI Alabama S. and closed the season with a runner-up effort in the GI Beldame S.

Sent through the ring at last year Fasig-Tipton November sale, the dark bay was led out unsold on a bid of $3.15 million, but a private transaction was concluded and she made her 4-year-old debut in this track's seven-furlong GI Madison S. for Louise and Kiki Courtelis's Town and Country Farms. A rallying second in that Apr. 4 test, Stopchargingmaria easily defeated Yahilwa (Medaglia d'Oro) by four lengths in the GII DuPont Distaff S. at Pimlico May 15, then took down the colors of Untapable (Tapit) in Saratoga's GIII Shuvee H. Aug. 2. She most recently set a pressured pace in the GI Personal Ensign S. Aug. 29, but gave way late to finish fourth. There would be no interim start in the Beldame–or any other Breeders' Cup prep for that matter–and that decision reaped benefits Friday.

One of three in the race for trainer Todd Pletcher, Stopchargingmaria was ridden for speed by Javier Castellano, but was not as quick as some of her other rivals and settled in fifth around the clubhouse turn as My Sweet Addiction (Tiznow) led from GII Delaware Oaks upsetter Calamity Kate (Yes It's True) at the fence, favored Wedding Toast (Street Sense) three wide and Yahilwa on the wide outside. When Jose Lezcano took a hold of Wedding Toast to ease her back off the pace and into the three or four path, Castellano allowed his mount to amble up alongside, but was committed to deep run as they reached the end of the backstretch. Asked to kick on at the three-eighths pole, Stopchargingmaria pulled her way into a contending position, but Stellar Wind was coming with an even wider run, and the stage was set. The two appeared to brush a furlong and a half from the wire and again just inside the eighth pole, and although Stellar Wind looked to have all the momentum, Stopchargingmaria refused to let her by, then was allowed to keep the victory.

“The real key was when we made the decision not to run back after the Personal Ensign and train her up to this,” said Pletcher, who tied Aidan O'Brien and Bill Mott for fourth among trainers with nine Breeders' Cup wins. “Being able to train her in her 2- and 3-year-old years, [it's clear] that she runs her best races sometimes when she's fresh. I think that was the key, and how she trained here. I thought her work here on Saturday was exceptional. She's the kind of filly who when she breezes like, that she tips herself. I thought that's what she did in her breeze the other day.”

The winner's dam was purchased in by Stonestreet Thoroughbred Holdings for $500,000 at the 2013 Fasig-Tipton November sale. She is represented by a colt of this year from the first crop of Gio Ponti (Tale of the Cat) and was bred this year to Tapit.