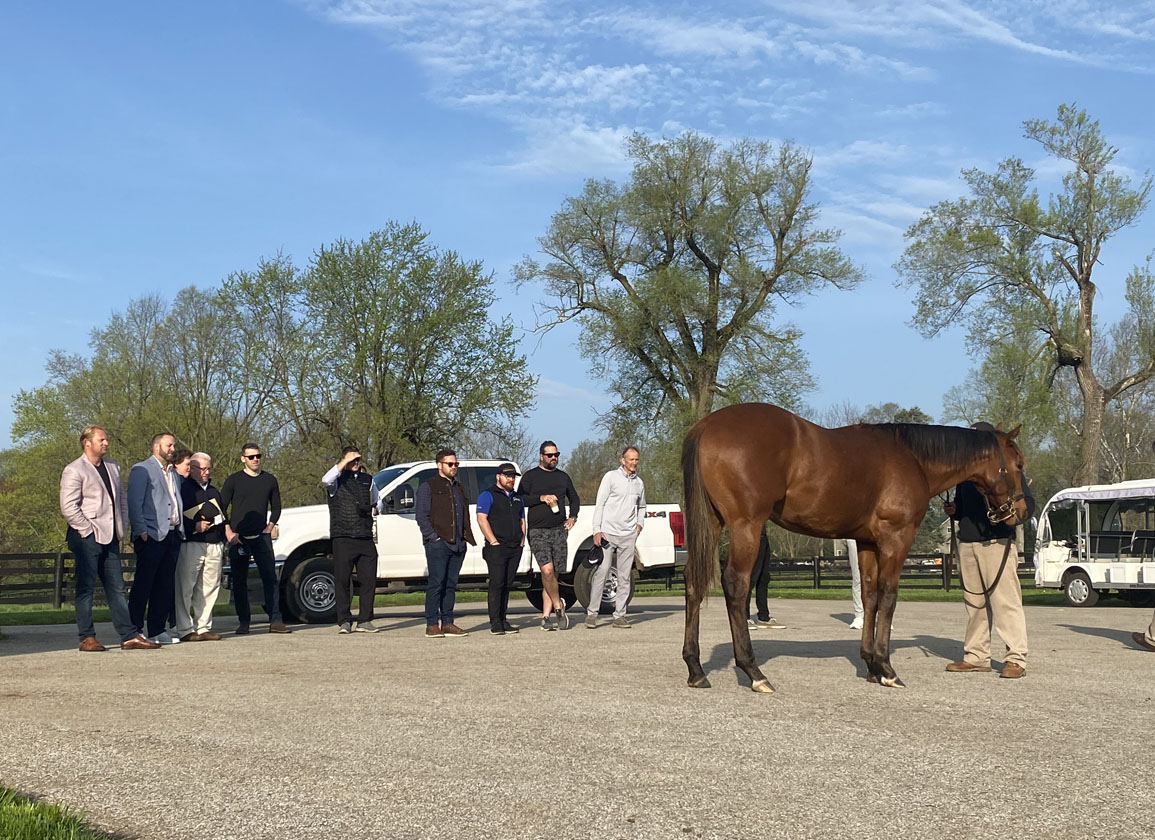 A group of 15 businesspeople from across the U.S. visited Lexington's horse country this past weekend to get their first taste of all the racing industry has to offer. The enthusiastic group represented Stony Point Bloodstock, which was launched last year by Chilly Bleak Farm's Jim Fitzgerald, Bill Baxter, a veterinarian from Grand Rapids, Michigan, and his son Matt Baxter, founder of a human resource technology startup called Wedge. The trio started the partnership with the goal of setting up a for-profit pinhooking group that would also create an experience for its partners by introducing them to the sport of horseracing.

Stony Point Bloodstock purchased six colts at last year's breeding stock sales that are now developing at Fitzgerald's Chilly Bleak Farm in Virginia. While this year's group of 20 partners await their yearlings' return to the auction ring, many embraced the fun of their investment by taking a trip to Kentucky to visit the sires of their pinhooks and learn more about the Thoroughbred industry. Their excursion included a day of racing at Keeneland and visits to WinStar Farm and Spendthrift Farm.

“The farms here are incredible,” said Ryan Millsap, an investor from Georgia. “Getting out and being connected to nature in this way with the horses is really refreshing. We had a great day at the track yesterday. Everyone really enjoyed the interactions with the horses, the jockeys and the owners.”

“It has been a whirlwind over the last 24 hours of learning so much,” added Nate Heyboer, a fellow investor from Michigan. “I had no idea all the things that the sport had to offer and how much of a community racing really is. It's been a lot of fun. There are so many different terminologies and there is so much education that goes into knowing the sport. It's a lot more than just a horse running around the track.”

During their visit to Spendthrift Farm, the partnership dropped in on an early-morning breeding session, saw the sires of three of their yearlings, inspected a Spendthrift yearling slated for the sales this year and had the privilege of visiting champion Beholder and her newborn Curlin colt.

Their steady stream of questions varied in topic, but all reflected the inner workings of business-oriented minds: How did Into Mischief's stud fee get to be so high? What is the career path of a stallion handler? How do you know this yearling is going to do well at the sale? And jokingly (maybe), how much would it cost for us to buy Beholder's foal?

“It's absolutely enjoyable for me to see people's first reaction to the Bluegrass and the inner workings of the industry,” Baxter said. “I think overall this partnership has been well-received in general, but this weekend has sort of piqued their enthusiasm a bit.”

Baxter said that a bi-weekly newsletter is sent to the partners to keep them updated on the sextet.

“Jim will do conformation updates and we have had some exciting updates with some of the sires of our colts,” he said. “There are two Not This Times running in the Kentucky Derby and we have one colt by Not This Time. I think it's fun for the investors to know their sires are hot and it gets them connected to the rest of the industry.”

Fitzgerald explained that one or two of the yearlings may be sent to the Fasig-Tipton Saratoga Selected Yearlings Sale, but most will likely end up at the Keeneland September Sale.

“The plan is to try to grow it from there,” he said. “Obviously we'd like to have a little success first, but these people are very enthusiastic. Hopefully we can grow the whole thing from there and maybe eventually evolve into having a couple racehorses and maybe a couple broodmares.”

The investors all seemed to have joined the partnership for different reasons. For Heyboer, it was an opportunity to try out a unique type of investment.

“People usually say that if you're going to invest in something, you should know everything about it before you invest, but this is the complete opposite,” he noted. “Most people would say that an investment like this is a little crazy. Maybe it is, but this is one of the greatest investments I've ever made not just because of the financial possibilities, but just the sheer coolness of it. It's something different. It's not just a piece of paper that says we own something. We feel like we're a part of what's going on here in Lexington.”

For Millsap, investing offered him a chance to reconnect with nature.

“It's easy for people that live in urban environments to get really disconnected from rural life,” he said. “I think we miss out on a lot when we don't have the connection that we had to horses for thousands of years as humans. I think there's a spiritual element to interacting with horses that people who are around horses all the time know and love and feel invigorated by, but for those of us that don't get to do that all the time, I think this is a great mini-substitute.”

Millsap was confident that the trip to Lexington and the up-close experiences he had on the farms sealed his desire to stay involved in racing.

“I think you have to get the hands-on experience to really find the delight in it,” he said. “Certainly we're investing in order to make money. The returns can be really good if you know what you're doing, and these guys know what they're doing, but when you couple that with the ability to get out here and have interactions in a way that you otherwise wouldn't have had, I think that's what makes it all worth it.”

He continued, “In order to do any of this stuff well with animals, you have to love the process. I love the horses in their natural element in the fields even more than I love the racing, but the racing is the essential piece because at the end of the day, it drives the capital. All these things have to be driven by capital and that doesn't mean there's not enjoyment, love or passion. It means something has to make money in order to be sustainable, and the racing industry is exactly the same way.”

Heyboer also confirmed that after the partnership's pinhooks sell this fall, he will be back for more next year with several new partners behind him who are eager to join in the fun.

“I don't know how I would ever be able to get out now,” he said with a laugh. “This is just so much fun. Even if the first year doesn't turn out great, we're definitely going to be back for year two and three. I've got a lot of people who are watching how this goes and I think we are going to have a lot more people for year two and three.”