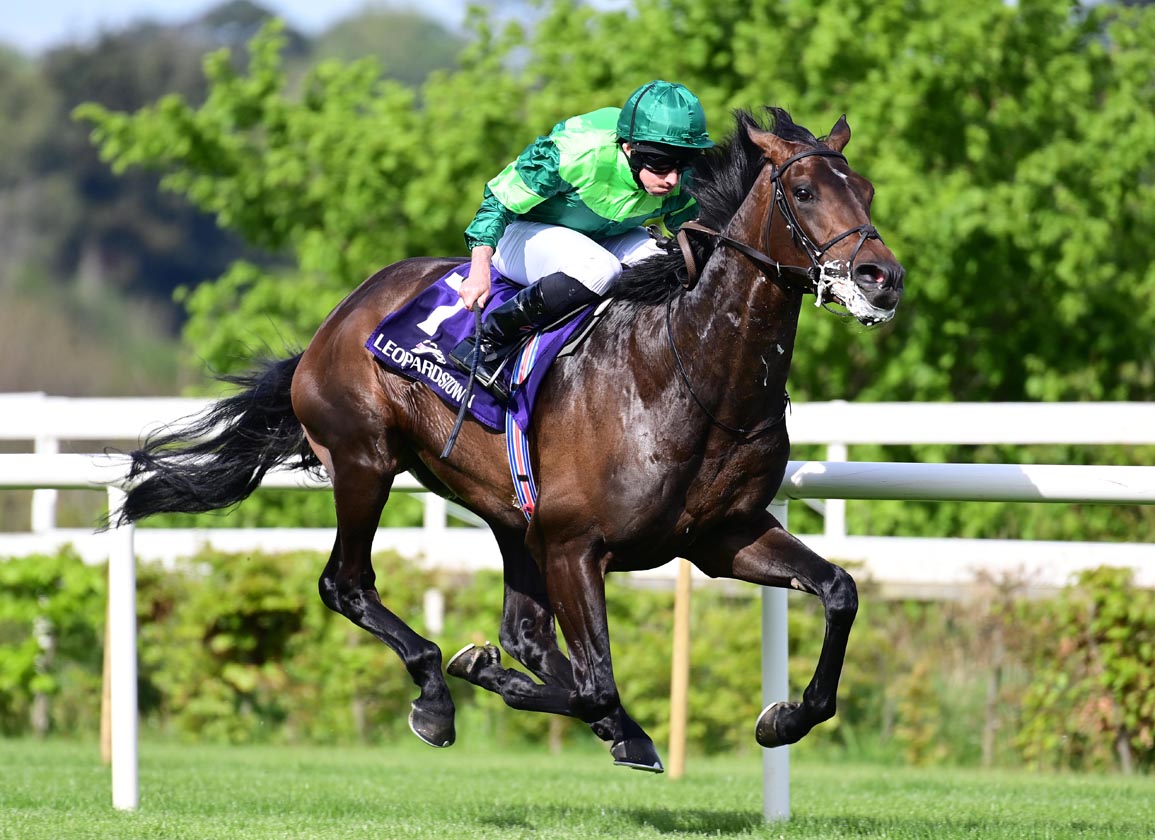 Barely moments after the news broke that Luxembourg (Ire) (Camelot {GB}) will miss the G1 Cazoo Derby, a stunning G3 Derby Trial win by Stone Age (Ire) (Galileo {Ire}–Bonanza Creek {Ire}, by Anabaa) caused the Ballydoyle seismometer to significantly downgrade its disaster measurement. Throughout what can only be termed as “Galileo week”, the stable's Classic trial winners have come in a relentless flow and the injury to the G1 Vertem Futurity Trophy which would normally have registered as a five on the Richter scale was only a one or two as Peter Brant, Susan Magnier and Michael Tabor's 10-11 favourite had delivered his own dynamic display in the famed Leopardstown trial. Putting himself in the midst of an already outrageous battalion of Epsom Classic contenders from Rosegreen, last year's G1 Criterium de Saint-Cloud runner-up who had more than hinted at this kind of prowess with a nine-length maiden win at Navan Mar. 29 may well have done enough to secure Ryan Moore's allegiance heading to the Blue Riband. Power-packed the whole way isolated in front, he kept it up from the top of the straight to do it like Bolshoi Ballet (Ire) (Galileo {Ire}) had 12 months ago. At the line, there was a 5 1/2-length margin back to Glory Daze (Ire) (Cotai Glory {GB}), who was in turn a neck ahead of French Claim (Fr) (French Fifteen {Fr}). “He has that class, he's able to pick up and then he pushes it out all the way to the line,” enthused Aidan O'Brien, whose magical week involved nine winners partnered by the similarly untouchable Moore.

After all three UK Derby trials were scooped from Wednesday to Saturday, the pressure was on Stone Age to stretch the sequence in this staging post which has held such gravitas ever since Galileo himself put his stamp on it 21 years ago. Not Aidan O'Brien's first winner of the race, the late great stallion of steel was nevertheless the most important of the 15 overall and his influence will continue on this race a long time after his recent passing. This week has taken the form of a prolonged tribute to the sire's legend, with the clinching of the worldwide stakes record from Danehill in Wednesday's Listed Cheshire Oaks merely signalling the opening of the floodgates. His progeny have cleaned up in all bar one of the Classic trials on offer at Chester, Naas, Lingfield and here and this was stakes winner number 353, with Stone Age following Thoughts of June (GB), Changingoftheguard (GB), Star of India (GB), United Nations (GB) and History (Ire) in another landmark period for a stable which brooks no limitations.

Aside from his second in the Criterium de Saint-Cloud, Stone Age had also filled that spot behind Atomic Jones (Fr) (Wootton Bassett {GB}) in this venue's G2 Champions Juvenile S. on the Irish Champions Day card and in a Galway maiden where the smart Buckaroo (GB) (Fastnet Rock {Aus}) had his measure. A winter's maturing, change of tactics, stepping up to middle distances and faster ground have resulted in a colt who is now a force to be reckoned with as the summer's big heats approach. “We always felt he was very good and we weren't really worrying about winning a maiden last year,” O'Brien reflected. “He has plenty of pace–he's a high cruiser, he's tactical and he keeps going. He ran over seven in a group 1 at two, so he's a high-tempo horse. He's a big hardy horse, he's not a wimp now.”

Ballydoyle's pecking order is there to be established now, with York still to come. While last year's Derby Trial winner Bolshoi Ballet went to Epsom alone, that is unlikely to happen in 2022 and O'Brien admitted he is unable to establish a clear hierarchy among the trial winners so far. “It's impossible really,” he continued. “Because all the trials were at different times they were all on different work schedules. Ryan will talk to the lads and hopefully they'll come up with a solution to the whole thing. You'd have to be very happy, any of the ones that had two runs have come forward from their first to their second.”
Stone Age's dam is a full-sister to the G3 Prix de Psyche and G3 Prix de Flore winner and G1 Prix de l'Opera runner-up Board Meeting (Ire) (Anabaa), who produced the Listed Prix Michel Houyvet scorer and G3 Prix de Conde runner-up Big Blue (GB) from a mating with Galileo. The second dam, the four-times group-winning Bright Moon (Alysheba), is also responsible for the G1 Prix de Diane and Prix de l'Opera heroine Bright Sky (Ire) (Wolfhound) and the dam of the G2 Union-Rennen and G3 Preis des Winterfavoriten winner Best of Lips (Ire) by Galileo's The Gurkha (Ire). Bonanza Creek has the 2-year-old filly Sandy Creek (Ire) (Frankel {GB}) and a yearling filly by Churchill (Ire).