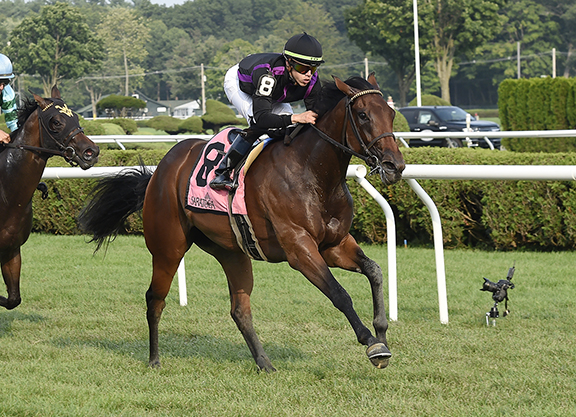 Marcus Stables' Stillwater Cove (Quality Road) has made her bones as a sprinter thus far in her young career, but the Wesley Ward trainee ships across the country and stretches out as a lukewarm morning-line favorite in a wide-open renewal of Saturday's GII San Clemente S. at Del Mar.

A first-out victress last spring at Keeneland, the bay faded to 13th in Royal Ascot's G3 Albany S., then returned to the States to post a 10-1 upset of the Bolton Landing S. last August at Saratoga. Tenth against males in the Breeders' Cup Juvenile Turf Sprint, she was a good second after chasing a fast pace in the Limestone Turf Sprint S. in her seasonal debut Apr. 12 at Keeneland before running an even fourth in the GIII Soaring Softly S. last out May 18 at Belmont.

Maxim Rate (Exchange Rate) pulled a 28-1 shocker in her career bow Feb. 16 at Santa Anita and proved that was no fluke with a nose second in the GIII Providencia S. there Apr. 6. Scoring as the favorite in the GIII Senorita S. May 4, she looks to rebound from a disappointing fifth in the GIII Honeymoon S. June 1.

Mucho Unusual (Mucho Macho Man) tries open stakes for the first time looking to extend her unbeaten turf record. Runner-up in the California-bred Generous Portion S. and Golden State Juvenile Fillies S. as a juvenile, she went wire to wire in the California Cup Oaks in her grass bow and repeated in an open optional claimer June 16 at Santa Anita.

Tommy Town Thoroughbreds' Keeper Ofthe Stars (Midnight Lute) also comes in riding a win streak. Winless in three dirt efforts as a 2-year-old, she graduated by open lengths when switched to synthetic Apr. 7 at Golden Gate and repeated in a mile off-the-turfer there May 18. Stepping on the lawn for the first time in an optional claimer June 9, the gray set a fast pace and kept on going to score at 11-1 while setting a course record for 1 1/16 miles at the Bay Area oval.