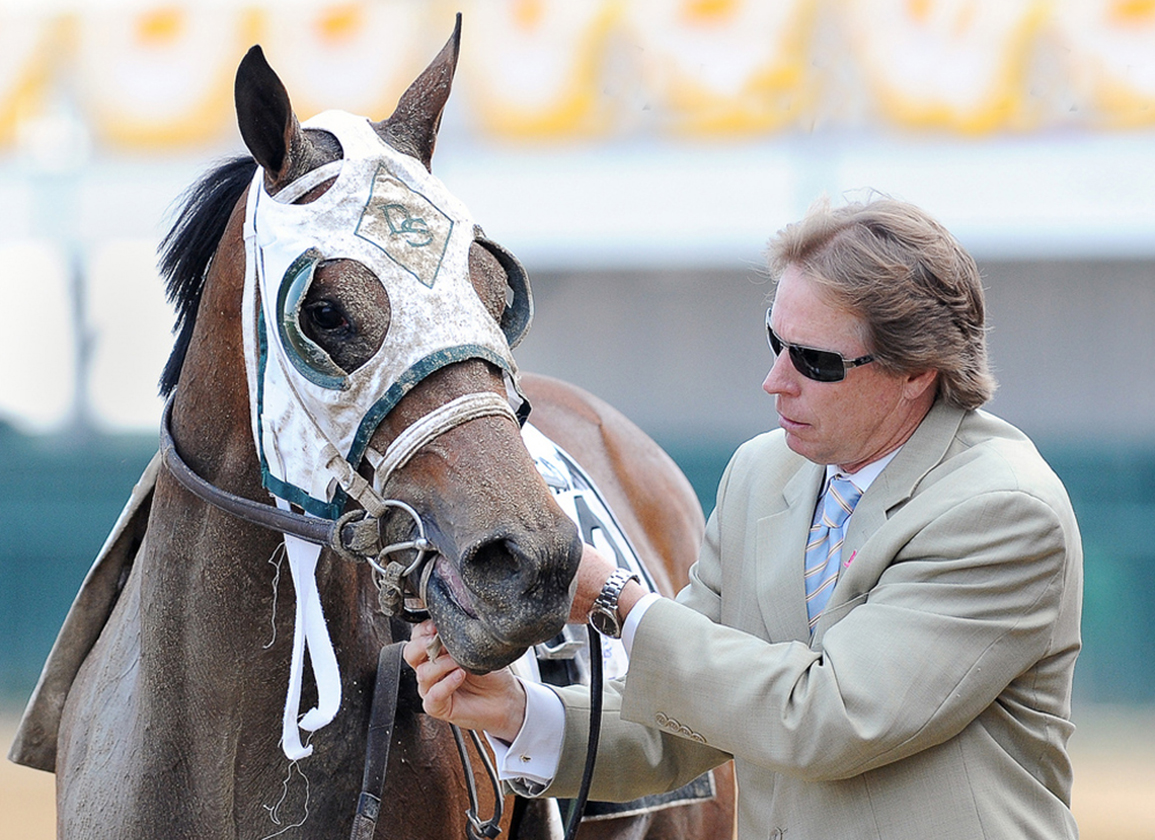 Put Dallas Stewart in front of a chessboard, and you know that he'd almost always rather corner the king, with a potential checkmate scenario, than turn around and strike out a mere pawn or two. Sure enough, Wednesday the trainer announced that connections have agreed to go on the attack with Chess Chief (Into Mischief)–even though taking up an invitation for the GI Pegasus World Cup, at Gulfstream Jan. 29, entails renouncing a “home game” this weekend.

Chess Chief has developed a remarkable affinity for the Fair Grounds, scene of all five career wins to date. It was apt, as such, that the latest of those should have come in the Tenacious S. over Christmas–that race being named for the winner of 11 stakes round the track, including three editions (1958-1960) of the one for which Chess Chief holds an entry Saturday.

But it's not as though the GIII Louisiana S. represents much easier pickings than the $3-million prize in Florida: the presence of two elite sophomores of 2021, Mandaloun (Into Mischief) and Midnight Bourbon (Tiznow), makes it look an exceptionally tough field for the grade. And nor is it just the competition that is liable to prove white-hot at Gulfstream, where the pace could set up favorably for the kind of late charge Chess Chief deployed to nail the Tenacious.

“We're going to make a move and scratch on Saturday,” Stewart confirmed to TDN. “He has an invitation in Florida and we're going to see how we do over there. He's never been in a race where there's been a ton of speed, which it looks like there should be in the Pegasus. We kicked it around, back and forth, and I could see either side of it. It's going to be hard, very hard, but he's already made over $800,000, and if he can finish third that would put him over $1 million. And then we'd be starting to think about where he could be aiming, as far as being a stallion is concerned.”

Win, lose or draw in Miami, Chess Chief will still retain the option of the GII New Orleans Classic at the end of the meet–a race he won last year, and a natural opportunity to resume his bid to become a modern Tenacious. That's a fitting aspiration not only for Stewart, who laid down the roots of his own career here, but also for the family of the horse's late owner.

James J. Coleman, Jr. was a cherished figure in the Crescent City, a businessman and philanthropist who crossed the trans-Atlantic divide with such charm (an oarsman at both Princeton and Oxford) that he was twice honored by Queen Elizabeth II and even appointed her government's honorary consul in New Orleans.

“He was great man, a real fixture here in New Orleans,” Stewart said. “Unfortunately, he passed away [in 2019], but his son Jamie is picking up the reins. Jamie's daughter Jane-Owen is only about 12, but she's really interested, too.

“It just happens that their horse really likes the Fair Grounds. Some horses just like certain tracks. I don't know what it is, in this case, but he finishes off his races here real hard. He must really like the surface. But this would have been a very tough race for a minimal amount of money, compared to the other one. The other race is even tougher, of course, but there's more speed and it might just set up good for him.”

That dauntless approach is trademark Stewart, and has often paid dividends. A couple of years ago he won the GI Ashland S, with 52-1 shot Out For A Spin (Hard Spun), and he landed the GI Kentucky Oaks back in 2006 with a 47-1 shocker in Lemons Forever (Lemon Drop Kid). In consecutive years, moreover, he saddled an outsider to finish second in the GI Kentucky Derby itself: Golden Soul (Perfect Soul) at 34-1 in 2013, and then Commanding Curve (Master Command) at 37-1.

And he sends two sophomores in pursuit of Derby starting points in the GIII Lecomte S. on Saturday's card. Unified Report (Unified) steps up in distance, and out of state-bred company, after extending his unbeaten start in the Louisiana Champions Day Juvenile S.; but Surfer Dude (Curlin) appears to have his work cut out to reverse Gun Runner S. form with the impressive Epicenter (Not This Time).

“They've both got a lot to prove in a very good race, but they're training well and have run competitively here, so we're going to see where we're at,” Stewart reasoned. “I think Unified Report will [stay the new trip]: he's got a lot of strength, just looking at him, and he doesn't get tired when he's working. He's on a roll, three-for-three, so we'll see how good he is. Surfer Dude has to make a big move forward, but he did that before and hopefully can make another jump.”

There will be no less interest, however, in another 3-year-old from the barn who makes his debut in the ninth race. Vinco (Quality Road) was a knockout $1.5-million purchase by West Point Thoroughbreds at the Fasig-Tipton Midatlantic 2-Year-Old Sale last year and surfaces here in partnership with Gervais Racing LLC. “He's just getting started a little late, but he's a very nice colt,” Stewart said. “But none of those numbers matter, it's a horserace and they've all got to run.”

Another sophomore carrying a big tag shaped extremely well in defeat last weekend. Strava (Into Mischief) now represents a partnership including octogenarian Louisville Cardinals coaching legend Denny Crum after going through the ring for $825,000 at the Keeneland November Sale, following an impressive debut at the adjacent track's fall meet. He still looked green when resuming at the Fair Grounds, all but overcoming a messy trip through the slop in an optional claimer over just six furlongs.

“The conditions were very rough and he stumbled a little bit leaving the gate, but he finished up good and looked like was going to win despite a wide trip,” Stewart reflected. “I thought he ran big, we're hoping to stretch him out next time and he could be a very nice colt.”

Of his association with Crum, Stewart remarked: “Well, you know, these are very competitive people. They understand the game, they like to know the strategy, how we're going to accomplish things. I've worked with him for a long time, he certainly knows about winning, and that's what he likes to do. It's quite cool to have these type of people around you, it really is.”

Among his sophomore fillies, meanwhile, Stewart reported that the Grade I-placed Sequist (Nyquist) is closing on her first appearance since trying her luck in the GI Breeders' Cup Juvenile Fillies. “She did her second 5/8ths [breeze] today in 1:01,” he said. “She's looking at running middle of next month, probably in an allowance.”

Of his older team, Title Ready (More Than Ready) is set to accompany Chess Chief to Gulfstream. Winner of the Louisiana S. last year, he disappeared after a crack at the G1 Dubai World Cup and shaped well on his comeback at Churchill in November, only to fail to build on that next time.

“He did not have a great race in the mud at Oaklawn,” conceded Stewart. “But he's come back and had two good works since, and was a very well accomplished horse last year who ran big off his lay-off. He's been invited, so we'll give him a shot also.”

But Long Range Toddy (Take Charge Indy), who put himself on the Derby trail when winning the GII Rebel S. for Steve Asmussen three years ago, is struggling to revive that sparkle after a second disappointing performance in Hot Springs last weekend. “I know he loves Churchill but I just don't how much he still loves Oaklawn,” said Stewart. “He's got me scratching my head, to be honest, but we'll try to figure it out.”

In the round, however, Stewart can only be delighted with the state of his barn. In his 25th year as a trainer, he accumulated over $4.3 million in prizemoney in 2021, a tally he has only once surpassed–and then only narrowly, two years previously.

Sure enough, he will never worry about the Tote board, or the ratings–and hence the bold move with Chess Chief.

“Listen, I feel good about the horse,” he said. “And no, I'm not scared of any numbers.”