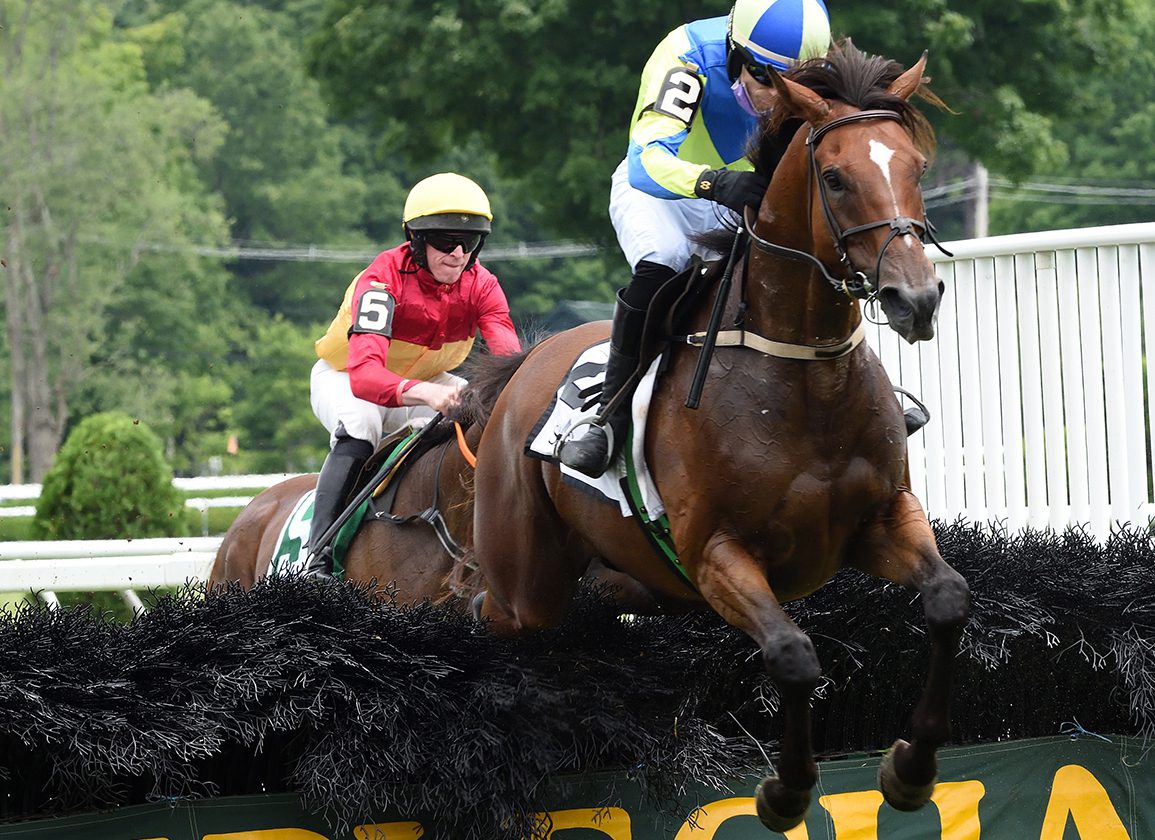 Snap Decision (Hard Spun) may be the best jumper in the country, but his next assignment will be in a flat race, Wednesday's $150,000 Colonial Cup at Colonial Downs. As trainer Jack Fisher sees it, he's got nothing to lose. While he wants to win and doesn't think that is out of the question, Fisher said one of the reasons he went into the race is that it should set his horse up for the G1 Jonathan Sheppard S., an Aug. 17 steeplechase at Saratoga.

“If nothing else, this will be a good work for the Jonathan Sheppard S.,” he said. “I can get that much more into the horse by doing this. In this case, one race equals three works. Depending on where he finishes, we should also pick up a little bit of purse money.”

Take a closer look at Snap Decision's lifetime record and you'll see a horse that shouldn't be in over his head in a stakes race on the flat. A half-brother to Mr Speaker (Pulpit), the winner of the 2014 GI Belmont Derby Invitational, Snap Decision began his career for the Phipps Stable and trainer Shug McGaughey. He was 2-for-18 on the flat, but finished third in the GIII Palm Beach S. and third in the Better Talk Now S.

Fisher went to the connections and got them to agree to sell.

“For one, they wanted to know that he was going to go to a good home,” Fisher said. “Secondly, he wasn't winning those races. He was third, fourth, fifth. That's the type of horse I am very interested in buying. I have to give all the credit to [co-owner] Charlie Fenwick because he was all about the sire, Hard Spun. I told him it wasn't Hard Spun, it was the dam [Salute]. She is a very nice dam. But Charlie was right.”

Snap Decision, who is eight, debuted over the jumps in 2019 and ended that year with a pair of stakes wins. He won his first Grade 1 win over jumps in the 2021 Iroquois S. and this year has run second in the G2 Temple Gwathmey S. before winning another Iroquois, this time by 7 1/4 lengths. He has finished first or second in 15 consecutive jump races.

“If I ran him in the Smithwick, I was going to get creamed with the weight,” he said.

Not wanting to go into the Sheppard off of a three-month layoff, Fisher found the Colonial Cup. (A race with the same name used to be one of the major stakes on the steeplechase circuit). Can he win? Fisher is trying to take a realistic approach to the race.

“I saw they had this 1 1/2-mile race there on the turf and I thought he is a good enough horse that he belonged,” Fisher said. “Rusty Arnold has a tough horse in there in Cellist (Big Blue Kitten). He won the [GIII] Louisville S. in his last start. I'm not sure he can beat him, but I'm not really scared of anyone else. I don't think the race is too short for him. I think it will be perfect.”

There aren't many examples of top steeplechase horses winning on the flat. In 1971, the Sheppard-trained Wustenchef won a flat stakes, the Sussex Turf H., and one over jumps, the Indian River Hurdle H., at the same Delaware Park meet. John's Call ran four times over jumps before being converted to a flat horse. In his second career, he became a two-time Grade I winner, winning the 2000 GI Turf Classic Invitational S. and the 2000 GI Sword Dance Invitational.

Fisher said that if Spun Decision turns in a big effort in the Colonial he might be tempted to run him again on the flat. But he said that the etiquette in his profession is that once a steeplechase trainer buys a horse from a flat racing stable, the horse should compete only in jump races. He said he will keep that in mind when making future decisions.

Forest Boyce has the riding assignment on Snap Decision and the gelding has been assigned 122 pounds, 36 less than he carried in the 2022 Iroquois at three miles. It's been three years and four months since he last raced over the flat, finishing third in a 1 1/8-mile dirt allowance race at Aqueduct. Since then, he's become one of the best jumpers in the sport. Does that mean he is good enough to be competitive in a $150,000 non-graded stakes race on the flat? The question will be answered Wednesday at Colonial Downs.