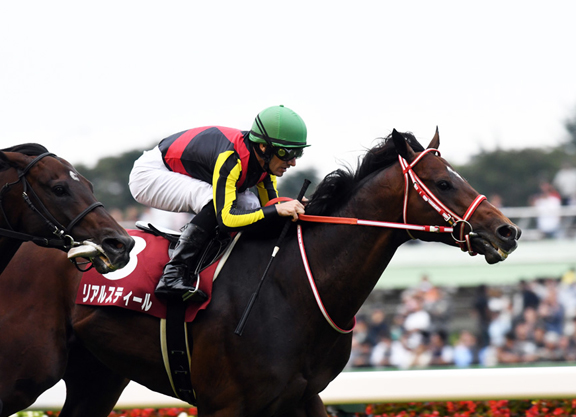 With even-money crowd's pick and Japanese juvenile filly champion Soul Stirring (Jpn) (Frankel {GB}) failing to deliver, it was 2016 G1 Dubai Turf hero Real Steel who made a late charge and held on by a gritty neck to take the G2 Mainichi Okan at Tokyo Sunday. Bowling along in seventh for much of this as Soul Stirring led the vanguard through solid fractions, covering the first 1000 metres in 1:00 flat, Real Steel came off the fence as the field neared the home stretch. Soul Stirring came under heavy pressure from there, as Real Steel let down strongly while mirrored by G1 Yasuda Kinen victor Satono Aladdin to his outside. Clawing his way to the head of affairs, he held Satono Aladdin safe all the way to the line, with Greater London taking show honours. Soul Stirring finished eighth.

Real Steel's last victory was the G1 Dubai Turf at Meydan in 2016, but he did finish second to Maurice (Jpn) (Screen Hero {Jpn}) in the G1 Tenno Sho (Autumn) at Tokyo last October. He signed off his year with a fifth in the G1 Japan Cup Nov. 27 and could only manage eighth last out in the G2 Nakayama Kinen on Feb. 26.

The unraced Loves Only Me, a half-sister to European champion juvenile filly Rumplestiltskin (Ire) (Danehill), as well as Irish Group 3 winner I Am Beautiful (Ire) (Rip Van Winkle {Ire}), has a half-brother to the winner named Jingoist (Jpn) (Heart's Cry {Jpn}) who has yet to race and a yearling filly by Deep Impact (Jpn). She in turn is a daughter of Monevassia (Mr. Prospector), a full-sister to G1SW and top sire Kingmambo. Real Steel's third dam is the blue hen Miesque (Nureyev).