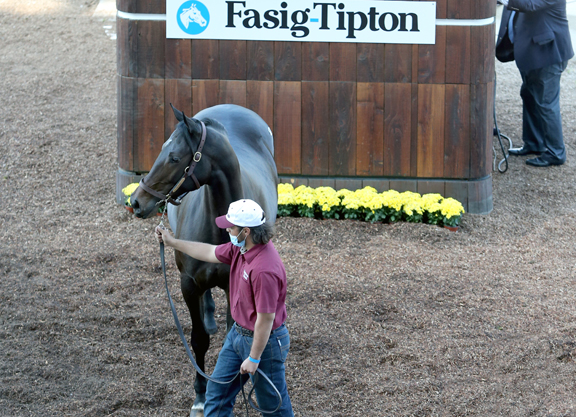 by Dan Ross and Jessica Martini

CYPRESS, CA – With numbers predictably down against a backdrop of pandemic and economic uncertainties, a total of 166 yearlings grossed $3,735,700 during the Fasig-Tipton California Fall Yearlings Sale held Monday at Los Alamitos Race Course. The average of $22,504 was down 15.9% from last year's inaugural Fasig California Yearling sale and the median dropped 30.0% to $10,000.

“Statistically it was in line with what we've seen at the Kentucky sales and the Ocala sales,” Fasig-Tipton President Boyd Browning said at the close of business Monday evening. “I thought, all in all, the storm was weathered better for this sale than I would have anticipated coming in.”

“I think we've seen across the country, sellers have adjusted their expectations and are being more realistic in setting their reserves,” Browning said.

The 2019 auction had been held in Pomona, but restrictions on crowd sizes in Los Angeles county forced the sales company to call an audible and move to Los Alamitos less than a month ago.

“We were limited in our ability to promote the sale because we didn't have a home for it until three weeks beforehand,” Browning said. “We had been holding the catalogue to be printed until we could find a date and a location.”

Browning continued, “I have to thank [Los Alamitos owner] Doc [Ed] Allred and his team and staff here at Los Alamitos because without their cooperation and effort and willingness to pitch in and help out the Thoroughbred industry, this sale would not have taken place today. It took a commitment to try to support the industry and it wouldn't have happened if they hadn't stepped up to the plate and said, 'We will work with you and we'll do everything we possibly can to make the sale happen.'”

A colt by Stay Thirsty brought the auction's highest price when selling for $200,000 to Naseer Fasihuddin. Fasihuddin purchased two of the auction's three six-figure lots. A year ago, six yearlings reached that threshold with a top price of $150,000.

“At least we were able to provide a marketplace for the breeders to give them an outlet for their horses,” Browning said. “That is so crucial because at the end of the day, they have to stay in business to provide the product  from a racing and sales perspective.”

Naseer Fasihuddin and partner Zahra Madiha attended Monday's Fasig-Tipton California Fall Yearlings Sale with just one stallion on their radar and they came away with a pair of yearlings by Stay Thirsty. Fasihuddin made the first six-figure purchase of the auction Monday when going to $110,000 to acquire a colt (hip 51) by the 2011 GI Travers S. winner.

“We were looking for a Stay Thirsty,” Fasihuddin confirmed after signing the ticket on hip 51, a son of graded winner Lost Bus (Bring the Heat). “It's a nice pedigree and he looked really good.”

Asked if he was done shopping after that purchase, Fasihuddin said, “I am still looking for one.”

It didn't take long for Fasihuddin to add a second Stay Thirsty yearling to his stable as he went to a sale-topping $200,000 to acquire hip 79. The dark bay is out of multiple stakes winner My Fiona (Ghostzapper).

“We came here specifically for these two horses,” Fasihuddin said. “I am happy to get them.”

Both yearlings were bred by Terry Lovingier and were consigned by his Lovacres Ranch. Stay Thirsty stands at Lovacres in Warner Springs for $10,000.

In addition to the two newly acquired yearlings, Fasihuddin and Madiha's broodmare Smiling Tigress was bred to Stay Thirsty this past spring and is carrying her first foal. A $20,000 purchase at the 2016 Barretts October Yearling sale, the mare was stakes placed and earned over $175,000 on the racetrack for the couple.

Fasihuddin said a trainer had not yet been picked out for the yearlings.

Eclipse Thoroughbred Partners has already capitalized on Nyquist's fast start at stud and the operation added a California-bred yearling filly by the GI Kentucky Derby winner to its roster Monday at Los Alamitos. Eclipse's Aron Wellman signed the ticket at $135,000 to acquire hip 75 from Tom Bachman's Fairview consignment.

“She is by a stallion who is off to an incredible start,” Wellman said of the filly. “Nyquist was obviously based in California, so I was very familiar with him and his record speaks for itself.”

Hip 75 is out of Moon River Gal (Malibu Moon), a daughter of multiple Grade I placed High Heeled Hope (Salt Lake) and a half-sister to graded winners Lady T N T (Justin Phillip) and Sweet Hope (Lemon Drop Kid). The yearling was bred by Bachman, who purchased Moon River Gal with the filly in utero for $270,000 at the 2018 Keeneland November sale.

“This filly, to me, was a standout here at the sale,” Wellman said. “To my eye, physically she was a woman amongst girls. She is by a hot freshman sire and she has some female pedigree to bolster the quality. You add on the fact that she is Cal-bred and it's the complete package. She was certainly the first round draft pick.”

Of plans for the yearling Wellman said, “We are going to ship her out of state to Florida to get her broken, but she'll make her way back to California to take advantage of the Cal-bred incentives.”

Not This Time Filly for Nichols

Trainer Gary Mandella purchased a filly by hot freshman sire Not This Time for $95,000 early in Monday's Fasig-Tipton California sale. Mandella signed the ticket on hip 64 on behalf of longtime owner Tom Nichols. The yearling is out of Masterful Lass (Mizzen Mast) and is a half-sister to stakes-placed Avanti Bello (Include). Bred by Lou Neve, the chestnut filly was consigned by Adrian Gonzalez's Checkmate Thoroughbreds.

“I just thought she was very athletic looking,” Mandella said. “We think she has a chance to be the right kind of horse. It's not so much about her pedigree or her page, I just thought she looked the part and walked the part. She was the kind of athlete I like to take a shot with.”

Mandella said he expected the yearling will be seen on the racetrack next year.

“We will give her a month off to get over the stress and then go right back on,” he said. “Not This Time is certainly not going to hold you back in trying to get a 2-year-old to the races given what he is doing. I'm not going to rush her–because I never do–but I'm not opposed to her making the races at some point in her 2-year-old year. We will treat her like the good filly we think she is. I think she was worth every penny.”

“[Nichols] has been with me for a few years,” Mandella said. “We have had some nice horses and some good luck. Hopefully she'll be just a little bit better.”

Hanson All in Caps

“She's from the Quarter Horse world,” Hanson said of Cannon. “They are joining us in the Thoroughbred world. He's a very well-balanced colt and we hope he's good.”

Hip 142 is out of Seeking the Ghost (Ghostzapper), a half-sister to multiple Grade I winner Pomeroy (Boundary). Richard Barton purchased the mare in foal to Jimmy Creed for $2,500 at the 2016 Keeneland November sale. That in utero filly sold for $130,000 at the 2019 OBS April sale. Seeking the Ghost produced an Upstart colt this year.

While Dads Caps has yet to have his first winner, Hanson is no stranger to getting young stallions their first victories. The trainer sent out Weston, the first winner for freshman Hit It A Bomb, to win the GII Best Pal S. in August.