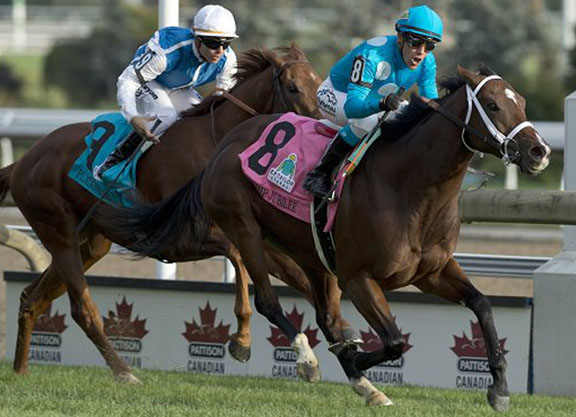 Trained by Kevin Attard, Starship Jubilee was named both Horse of the Year and Champion Female Turf Horse. She won three of her seven starts, including the GI E.P. Taylor S. and GII Canadian S.

Sam-Son Farm was named outstanding owner and outstanding breeder due to the exploits of their homebreds El Tormenta and Desert Ride. Sam-Son colorbearers won 13 races, including five stakes, and earned over $2-million. Meanwhile, horses they bred captured 28 races for over $3.2-million in earnings in 2019.

Canadian Hall of Famer Mark Casse, who is soon to enter the American Hall of Fame, won his 11th Sovereign Award for outstanding trainer. His trainees won 92 races in Canada last season, 12 of which were stakes, and earned over $5.1 million. Recently retired rider Eurico Da Silva secured his sixth outstanding jockey title with 183 wins–19 of those coming in stakes–and over $7.4 million in earnings. He was the regular partner of two-time Sovereign Award winner Pink Lloyd. Kazushi Kimura, who won the Eclipse Award for leading apprentice in America, also took home the same honor in Canada with 117 victories and over $3.7-million in earnings.

Anderson Farm's Loving Vindication (Vindication) was named outstanding broodmare after being a finalist in the category on multiple occasions. Her daughter Wonder Gadot (Medaglia d'Oro) is a three-time Sovereign Award winner, including 2018 Horse of the Year. Her now-4-year-old daughter Hard Not to Love (Hard Spun) captured the GI La Brea S. last term and her first foal is stakes winner Solemn Tribute (Medaglia d'Oro).

The E.P. Taylor Award of Merit went to owner/breeder Charles Fipke, a Canadian native who stands several stallions in the country. He has bred and raced the likes of Canadian champion Perfect Soul (Ire), his Breeders' Cup-winning daughter Perfect Shirl and American champion Forever Unbridled.

The Special Sovereign Award went to Harvey Warner, who was a major player in the revival of Assiniboia Downs and horse racing in Winnipeg, Manitoba. Warner led the group that formed the Manitoba Jockey Club to purchase Assiniboia Downs in 1994 when it went into receivership. He has worked tirelessly for racing in Manitoba and is a Jockey Club of Canada Steward.

Outstanding photograph went to Michael Bye and the outstanding sigital audio/visual and broadcast was won by Woodbine Entertainment for The Queen's Plate. The award for outstanding writing was granted to Dave Briggs for “Royal Victory for the Quintessential 'Small Guy,'” which was published in Canadian Thoroughbred Magazine.