Starry Dreamer Made It a War On Two Fronts 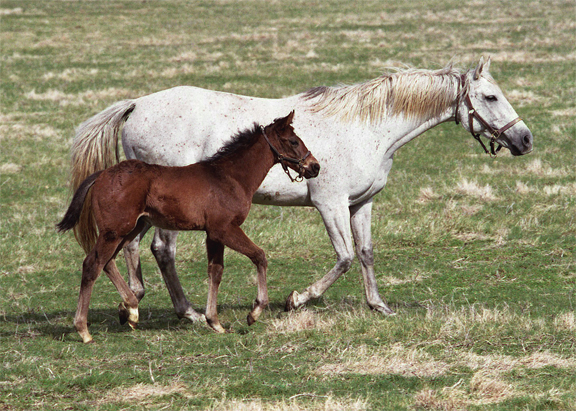 Starry Dreamer with War Front as a foal

Surveying a pedigree can be like looking across a cemetery: row upon row, in diminishing scale, the names multiply until the whole vast mesh of ancestry seems to absorb all individuality. Only the odd memorial remains neatly tended; the great majority are soon overgrown, the lettering faded.

Only rarely, then, do you encounter a Thoroughbred who can insist on due attention to great names of the past. One of those is War Front.

First and foremost, the Claiborne sire owes his glamour to the fact that he is a living, breathing son of Danzig. (Something of a reincarnation, in fact.) As such, and still in his own prime at 16, he is extending a line parallel to those by which Danehill and Green Desert made their sire one of the great modern patriarchs.

We owe this boon to the fact that Danzig was 24 when he sired War Front. It was another two years, incidentally, before he came up with a parting gift in Hard Spun–but that's one for another day. For now it's worth noting that both rebuke breeders' reluctance to persevere with aging sires, especially once in competition with sons whose exploits are fresher in the memory. They might make an exception for a breed-shaper like Danzig, or indeed Galileo now that he has turned 20. Only one or two rungs down the ladder, however, you will often find proven sires of sires peering indignantly into the dust raised by passing herds of mares as they stampede towards the latest fast-talking rookie.

The perennial mystery remains, as to how their 50-50 genetic input coalesced to produce as fast a runner, and as potent a sire, as War Front.

But the death this week of Starry Dreamer, at 24, makes it respectful at least to ponder the role of her own chromosomes. For it is not just through Danzig that we get very close to greatness in the flesh and blood of War Front (never mind, at $250,000 a sample, in his semen).

Alive and kicking in a Claiborne paddock just a couple of days ago, this cherished, white-haired dame was out of a daughter of Forli. And her grandmother? Well, she was by none other than Round Table.

Two stars fell out of a single constellation to land together on this farm Apr. 6, 1954. Round Table and Bold Ruler were famously delivered here on the same night, before embarking on two of the American Turf's greatest careers. But Round Table, a track record kleptomaniac, would make his principal impact on the breed as a broodmare sire. In this, he resembles his own father, Princequillo, notably responsible for the dam of Bold Ruler's peerless son Secretariat (himself a great broodmare sire).

Round Table's contribution to War Front's distaff line came from a mating in 1972, when he was 18, with a mare named Secret Promise. She was a daughter of Warfare, a champion juvenile who was favourite for the 1960 Kentucky Derby when derailed by injury. Secret Promise–later responsible for the dam of a Grade I winner in Home At Last, who beat Unbridled and Cee's Tizzy in a highly resonant Super Derby–gave Round Table a GSP filly named True Reality.

It was True Reality's 1980 mating with Forli, then 17, that produced Starry Dreamer's dam, Lara's Star. By then, of course, Forli had produced the iconic Forego; not forgetting the Claiborne legend Special, whose son Nureyev was disqualified in the 2,000 Guineas that same spring.

Forli, imported from Argentina by Bull Hancock, puts another layer of green, green grass into the background of War Front. He was by Aristophanes, a son of Derby winner Hyperion and wartime Oaks winner Commotion. Throw Round Table into the mix, plus the immense turf success of the Danzig line, and it's not hard to see why War Front should be one of few sires comfortably bestriding the Atlantic in these parochial times.

Rubiano, the ghostly sire of Starry Dreamer herself, admittedly fires a streak of dirt lightning into the family. And his three-parts sister Tap Your Heels–by Unbridled, like Rubiano a son of Fappiano–is the dam of a monster dirt sire in Tapit.

That means War Front's dam combines a very strong echo of Tapit with a ton of grass hardiness and class. Starry Dreamer was also a smart runner herself, Rubiano's first stakes winner. Subsequently purchased by Allen, she gained multiple graded stakes places, notably in the GI Gazelle H. of 1997, in accumulating $564,789. And she was versatile, too: you can't imagine Rubiano had many that were twice GSP over as far as 12 furlongs on turf.

Starry Dreamer arrived at Claiborne with zero inbreeding across five generations. Her first three foals Ecclesiastic (Pulpit), War Front and Teammate (A.P. Indy) were all graded stakes winners, while subsequent brothers by Giant's Causeway were repeatedly placed at that level.

The parallels between War Front and his father are hardly confined to an uncanny physical resemblance. Both retired to Claiborne with conservative expectations, Danzig having notoriously been confined to three starts and War Front largely settling for a supporting role in top sprints, aside from his success in the G2 (then) Alfred G. Vanderbilt S.

War Front was cut to $10,000 after covering just 64 mares in his third season, but then matched his sire with an explosive start on the track. He has never looked back, above all after Allen's homebred pair Declaration of War and War Command won at Royal Ascot in 2013.

Coolmore had partnered with Allen in both horses, themselves now making a promising start at stud. If Coolmore's long history of success with Danehill had helped to point the way, War Front has certainly proved an inspired hunch in its quest for outcross blood for Galileo and sons.

But not even Danzig could do all this on his own. Happily, with other young sires like Summer Front also staking their claim, the legacy of Starry Dreamer is now guaranteed not only by her son–who has made his customary flying start at the yearling sales–but also by a growing number of grandsons.

The old gray mare is to be interred near Forli's daughter Special in the Marchmont cemetery at Claiborne. Special's dam Thong is there, too, and Thong's sister Moccasin, the only juvenile filly to be named Horse of the Year. So there will be no nettles growing over her resting place; and whatever sun and rain and wind might do to the letters carved on her stone, they will never be effaced from the Stud Book.