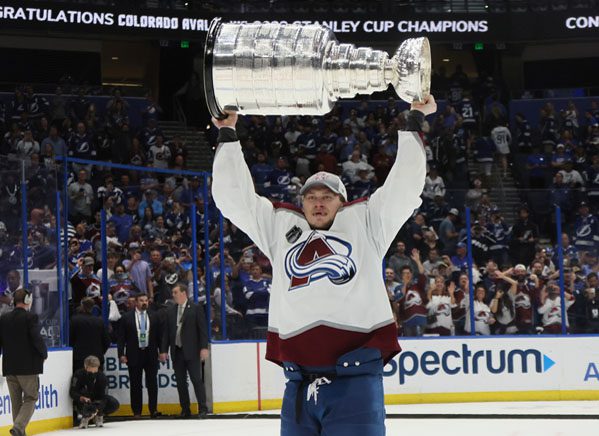 As far back as he can remember, and that includes 15 long years and over 900 career games in the NHL, defenseman Erik Johnson of the Colorado Avalanche has been chasing the ultimate dream of winning the Stanley Cup. A week and a half ago, Johnson, who also owns ERJ Racing over in our corner of the world, realized that dream, as his Avalanche took out the two-time defending champion Tampa Bay Lightning in six games in the Stanley Cup Final. Still glowing from that triumph, Johnson joined the TDN Writers' Room presented by Keeneland Tuesday as the Green Group Guest of the Week to describe the whirlwind he and his teammates have been on since last Sunday night, his plans to take the Stanley Cup to Del Mar for Pacific Classic day, his thoughts on the vastly improved safety of California racing and more.

Asked to compare his Cup victory to potentially reaching the mountaintop in racing, winning a race like the Kentucky Derby with ERJ, Johnson didn't mince words, saying, “I've never won the Derby, but I imagine this feels 1,000 times better. Because when you're an owner in the Derby, you're a spectator and you have no impact on what happens. When you're part of a team that wins the Stanley Cup, and you're actually out there doing it with your teammates, and it's something that you've put your whole life into since you were a kid, you can't top this feeling. It's just amazing, and I'm lucky because not a lot of people get to experience this. I've played with a lot of great players who never won.”

Southern California racing, mired in so many negative headlines during the rash of breakdowns at Santa Anita in 2019, has made–unfortunately–smaller headlines for a drastically improved safety record in the two years since. Johnson, who primarily races in California, was asked about the work California racing has done to correct such a dire problem.

“I think they've done a great job,” he said. “No matter what, you're not going to escape the negativity. There's always going to be someone that's upset. But seeing the statistics that have come out recently, there probably was a need for some reform and the leadership has done a really good job throughout the state. I think what's really helped is those pre-race checks. Every horse gets checked out, and I'm sure it makes some owners upset because some of their horses won't run after you've paid 30, 60 days worth of bills getting your horse ready to run, then they pull it out. But for the betterment and longevity of the game, those are things that needed to happen and steps that needed to be taken. So overall I think [California officials] should be commended. They've done awesome, and the game is now in a much better place than it was just a couple of years ago.”

Elsewhere on the show, which is also sponsored by Coolmore, Lane's End, the Kentucky Thoroughbred Owners and Breeders, XBTV, West Point Thoroughbreds and Legacy Bloodstock, the writers reacted to a weekend full of huge performances on the racetrack and Terence Collier's letter to the editor criticizing Bill Finley's argument for fewer stakes races. Click here to watch the show; click here for the audio-only version or find it on Apple Podcasts or Spotify.