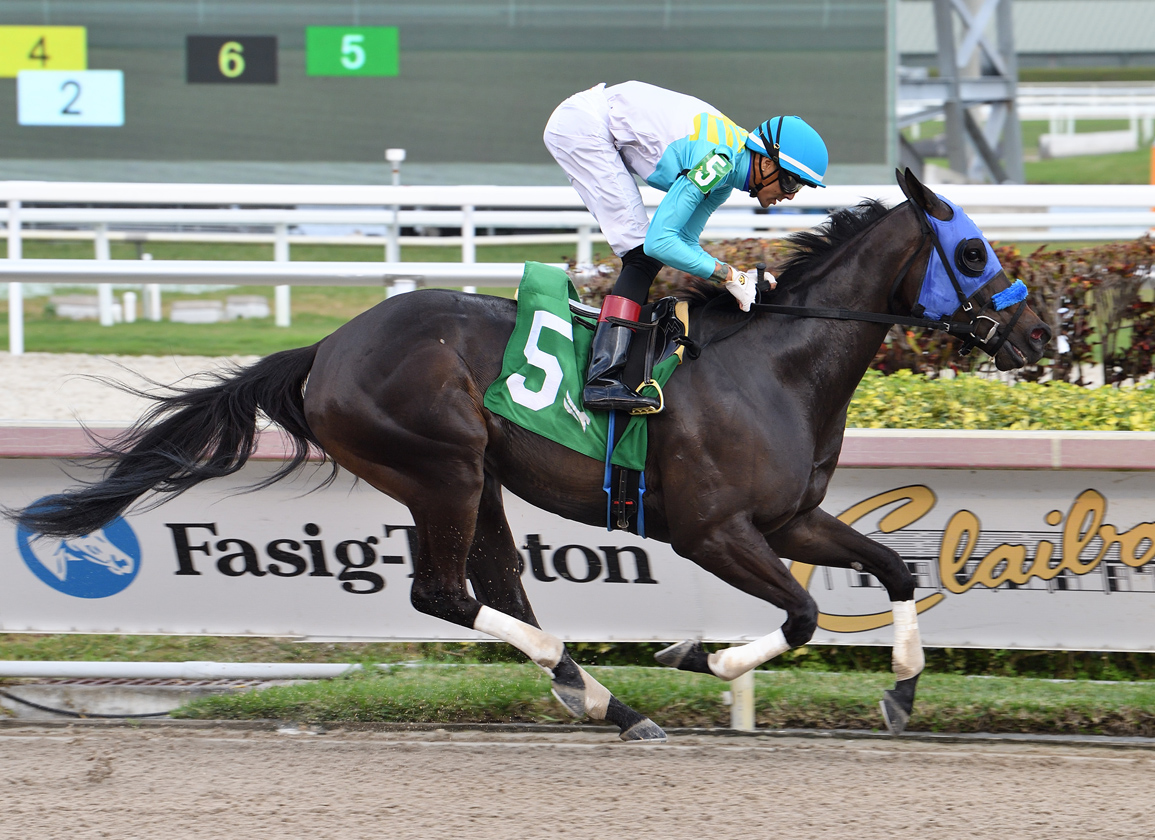 A stallion share in Almanzor (Fr) topped Fasig-Tipton's inaugural March Digital Selected Sale when selling for $250,000 to Riviera Equine SARL/Haras d'Etreham when online bidding concluded Tuesday afternoon. The 9-year-old stallion, who stands in France at Haras d'Etreham, will be represented by his first crop of 3-year-olds this year. A Group 1 winner on the racetrack, he is the sire of Dynastic (NZ), who is Group 1-placed in New Zealand, as well as the group-placed Andalus (NZ) and Queen Trezy (Fr).

Also bringing six figures at the auction was Bramble Berry (Brethren) (hip 18), who sold for $150,000 to Kiki Courtelis of Town and Country Farm. The 5-year-old mare was most recently second in the Mar. 12 GIII Hurricane Bertie S. for owner RyZan Sun Racing and trainer Kent Sweezey.

“We haven't decided if we are going to keep running her or not,” said Town and Country President Shannon Potter. “We were just looking to add something to the broodmare band. We like these young racemares. We had a couple of people go look at her for us because she is in Florida right now.”

Bramble Berry is out of Regal Rose (Empire Maker) and she is a half-sister to multiple stakes winner and graded placed Bramble Queen (Silent Name {Jpn}).

“Her sire is a Florida-sire, but she's out of an Empire Maker mare, so her page is better than most that you would think would come from there,” Potter said. “So we were kind of excited to buy her.”

Fasig-Tipton offered 17 lots at its first-ever digital auction, which opened for bidding last Thursday and closed shortly after 2 p.m. Tuesday. Ten of the offerings sold, while buyers still had the opportunity to make offers on the remaining hips.

“I know [Fasig-Tipton Director of Digital Sales] Leif [Aaron] being the new guy on the block over there has been hitting the ground hard trying to jump start the Fasig program of the digital sale and I think he did a pretty good job with his first go at it this time,” Potter said.

Aaron said he was pleased with the results of the company's first digital sale.

“Overall, it was very encouraging to see that we could successfully sell offerings from across the country, and the world,” Aaron said. “We sold racehorses, broodmare prospects, in foal mares–some of which were on 2022 covers–and an international stallion share. We had an impressive number of registered bidders from both within the United States and internationally, and we got a good feel for what the market wants in the digital space. The sale's average price exceeded $65,000, which was great, and I think that we built positive momentum for the future. We're already thinking about how and what we can improve for our next sale.”

Of the digital platform, Potter added, “I feel like you get a little more time to look at them this way and do your homework and it's not as many horses. It makes it a little bit easier than having to go look at 300 head in one day.”

Town and Country has been active as both buyers and sellers during Keeneland's online auctions and Potter agreed Bramble Berry would not have been a horse on the operation's radar without the digital offering.

“Kiki likes to say the time to sell is when someone is looking to buy,” Potter explained. “A lot of us, even when I was working at Taylor Made, we don't know when somebody is ready to buy or somebody is ready to sell. So having all these multiple options to be able to play the game at different levels, it really helps. The people we just purchased this mare from, it allows them to go buy another horse. They are not breeders and now they can go buy another 2-year-old and the money just keeps running over through the business. It's what you want.”

“I'm very happy with the process and result of the Fasig Digital sale,” Levy said. “It fills a need for constant trade in an easy, comfortable, and transparent way. We had a good turnout of people coming to the farm to see [our offerings], and they brought a fair value–a win/win option for sellers and for buyers. It was fun and I'm looking forward to doing it again.”