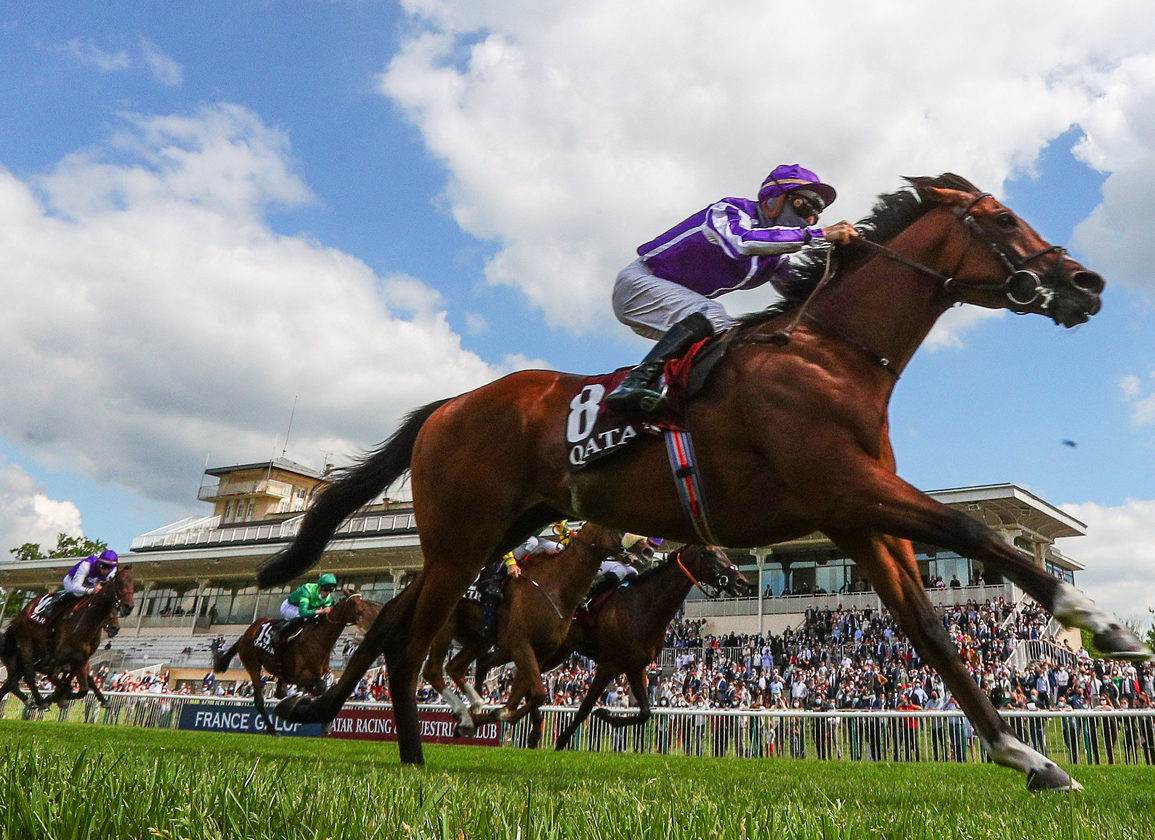 St Mark's Basilica (Fr) (Siyouni {Fr}), a four-time Group 1 winner in 2021 and five-time top-level scorer overall, was named the Cartier Horse of the Year and Cartier 3-Year-Old Colt during the 31st annual Cartier Racing Awards at the Dorchester Hotel in London on Wednesday evening.

A winner of the G1 Dewhurst S. at two, the Robert Scarborough-bred completed an unbeaten campaign in 2021 including a brace of French Classic wins in the G1 French 2000 Guineas and G1 Prix du Jockey Club. The 1.3 million gns Tattersalls October Yearling then won a thrilling renewal of the G1 Eclipse S. and defeated 2020 GI Breeders' Cup Turf heroine Tarnawa (Ire) (Shamardal) in the G1 Irish Champion S. to end his career. At the beginning of November, it was announced he would join the Coolmore Stud roster for 2022.

Raced and trained by the same connections as St Mark's Basilica, Classic heroine Snowfall (Jpn) (Deep Impact {Jpn}) was given the nod as the Cartier 3-Year-Old Filly. A brilliant winner of the G3 Musidora S. in May, the bay added the G1 Oaks by a record 16 lengths in June at Epsom. The margin of her G1 Irish Oaks victory was 8 1/2 lengths, and she was eased to a four-length win versus her elders in the G1 Yorkshire Oaks in the summer. She was second in the G1 Prix Vermeille in France and third in the G1 British Champions Fillies & Mares S. at Ascot to end her year.

Sheikh Hamdan bin Mohammed Al Maktoum's Palace Pier (GB) (Kingman {GB}) was named the Cartier Older Horse. Trained by John and Thady Gosden, the Highclere Stud and Floors Farming-bred was named the Cartier 3-Year-Old Colt in 2020. After a season that saw him win two Group 1s over a mile last term, he swept all before him in his season opener-the G2 bet365 Mile at Sandown in April. He added the G1 Lockinge S. to his resume later that spring and defeated all comers in the G1 Queen Anne S. at Royal Ascot. After scoring in his second consecutive G1 Prix Jacques le Marois in France, Palace Pier finished his career with a second in the G1 Queen Elizabeth II S. to Cartier 3-Year-Old Colt nominee Baaeed (GB) (Sea The Stars {Ire}). He will stand at under the Darley banner at Dalham Hall Stud.

Native Trail (GB) (Oasis Dream {GB}) earned Cartier 2-Year-Old Colt honours after a flawless campaign for Godolphin and Charlie Appleby. Bred by Haras d'Haspel, the bay brought 210,000gns at the 2021 Tattersalls Craven Breeze-Up Sale and was quickly off the mark at first asking at Sandown. The G2 Superlative S. went his way at Newmarket, and then he traveled to Ireland to face off with fellow Cartier juvenile colt nominee, Point Lonsdale (Ire) (Australia {GB}) in the G1 National S. at The Curragh. Despite the high quality of opposition, the result was the same, with Native Trail running out a 3 1/2-length winner. In his final start of the season, the colt was first past the post in the G1 Dewhurst S. back at HQ in October, the same Group 1 double achieved by former Godolphin star and young sire Pinatubo (Ire) (Shamardal).

Cheveley Park homebred Inspiral (GB) (Frankel {GB}) was named the Cartier 2-Year-Old Filly. Trained by John and Thady Gosden, the daughter of G1 1000 Guineas bridesmaid Starscope (GB) (Selkirk) carries an unbeaten record into her sophomore season. Successful on debut at Newmarket in June, she landed the Listed Star S. at Sandown a month later and took the G2 May Hill S. at Doncaster in September. She capped 2021 with a 2 1/2-length victory in the G1 Fillies' Mile in October.

Starman (GB) (Dutch Art {GB}), a homebred for David Ward, was honoured with the Cartier Sprinter award. A winner of the G2 Duke of York S. in May where he downed 2020 G1 July Cup winner Oxted (GB) (Mayson {GB}), the 4-year-old colt was back in action in the G1 July Cup at Newmarket. In that race he overcame a troubled trip to win by 1 1/4 lengths and gave his owner and trainer, Ed Walker, a first win at the highest level. It was announced in October that he would stand at Tally-Ho Stud for 2022.

After claiming three major staying prizes in 2021, Singula Partnership's Trueshan (Fr) (Planteur {Ire}) was named the Cartier Stayer. Trainer Alan King was given his first Group 1 success on the Flat in the G1 Goodwood Cup by the 5-year-old gelding. Ridden by Hollie Doyle in that prize, Trueshan reveled in the testing conditions of the G1 Prix du Cadran on Arc weekend, to defeat three-time Cartier Stayer Stradivarius (Ire) (Sea The Stars {Ire}). After returning from France, Trueshan, bred by Didier Blot, defended his crown in the G2 British Champions Long Distance Cup.

Harry Herbert, Cartier's Racing Consultant said, “The 2021 European Flat season has once again highlighted all that is wonderful in this great sport.

“With capacity crowds back at racecourses and some brilliant equine performances, we were ultimately rewarded with a season to savour.

“Racing cannot continue without the ongoing support of owners and I would like to extend my congratulations to tonight's winners–Coolmore, Godolphin, Sheikh Hamdan bin Mohammed Al Maktoum, Cheveley Park Stud, David Ward and the Singula Partnership.

“David Elsworth has truly reached the summit of his profession and is the perfect recipient for the Cartier/Daily Telegraph Award of Merit in 2021. A man whose life has been steeped in racing, Elsworth's career spans 67 years and has scaled the heights of both Jump and Flat racing. One of the most successful dual-purpose trainers Britain has produced, the sport is lucky to call him one of our own.

“Cartier's support of these prestigious awards stretches right back to 1991 and is ongoing as we once again enjoy all coming together at the Dorchester Hotel for such a wonderful event. We are truly blessed to be able to enjoy such tremendous support.”

Laurent Feniou, Managing Director of Cartier UK, added, “The 2021 European Flat season has lived up to its billing as horseracing once again highlighted the magic and brilliance of the sport following a challenging 2020.

“I am delighted for the Cartier Racing Awards to be taking place once again at the Dorchester Hotel celebrating another wonderful year of sport.

“It is an honour to celebrate the very best of horseracing and it is a privilege for Cartier to be celebrating the 31st anniversary of the Cartier Racing Awards. My heartfelt congratulations go out to this year's exceptional winners.

Horses earned points in Pattern races (30%), combined at the end of season with the opinions of a panel of racing journalists/handicappers (35%) and votes from readers of Racing Post and The Daily Telegraph (35%) to be considered for the awards. Highlights of the 31st annual Cartier Racing Awards will be shown on Sky Sports Racing on the evening of Friday, Nov. 12.