Home » Archive » Shared News » St. Lucia Soon to be the 'Pearl of the Caribbean'

St. Lucia Soon to be the 'Pearl of the Caribbean' 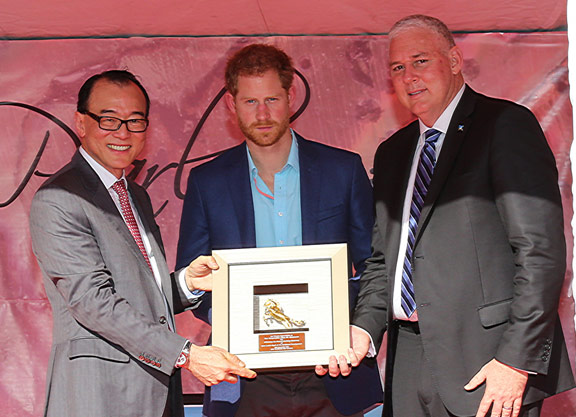 VIEUX FORT, St. Lucia – China Horse Club Founder and Chairman Teo Ah Khing has made a name for himself in the worldwide horse racing community as both an innovator and someone extremely dedicated to increasing his country's awareness and involvement in the sport of kings. He took that commitment and enthusiasm to a new level over the weekend when breaking ground on the island of St. Lucia's first ever race course, which is the centerpiece of his latest endeavor, the Pearl of the Caribbean.

“I think St. Lucia is geographically located in a position that will play a role for China,” remarked Teo, while sitting in the restaurant of St. Lucia's St. James Club resort just hours before the ground breaking ceremony. “We are a club that promotes lifestyle and a lot of our members have expressed interest in the Caribbean. Secondly, it could become a new quarantine facility for bringing horses eastward due to its proximity to Miami.”

Teo added, “The new Prime Minister of St. Lucia is a very forward thinking person and he took the time to come to China and learn our racing. I think that in itself shows us he welcomes the eastern involvement in his country.”

Not only was Prime Minister Allen Chastanet present and actively involved in the ground breaking ceremony, but so was His Royal Highness Prince Harry of Wales, who attended the event as part of his tour of the Caribbean islands.

Friday's ground breaking festivities started with a private tour of the project's three main sites with a group that included racing dignitaries from across the Caribbean, international advisors and investors. Situated on 700 acres of undeveloped land on the southern end of the island, the $2.6-billion project has several components, all of which aim to heighten St. Lucia's profile as a premier tourism destination. In addition to the racetrack, the Pearl of the Caribbean will also include several boutique resorts, a marina, a casino, shopping and residential areas, such as waterfront villas.

“I think the island itself has a lot of virtue that for the eastern market is unexplored,” Teo said. “We are using the China Horse Club to spearhead and trail blaze to open up a new market for the island with eastern and south Asian tourists.”

The ceremony took place at the main site where the racetrack will be constructed. Teo's design consultancy firm Desert Star Holdings designed and completed Dubai's Meydan Race Course and that same team, known here as DSH Caribbean Star, will be working on St. Lucia's top level dirt and turf courses. In addition, the racing portion of the project will also include state of the art barns, a quarantine facility, a veterinary clinic and several lush paddocks.

“The dirt track plays a prominent role in our new design,” Teo commented. “The direction respects the Caribbean racing culture. I think it will be one of the most comprehensive tracks, but fitting with the culture of the Caribbean.”

Teo kicked off Friday's ceremony by presenting both the Prime Minister and the Prince with special gifts symbolic of the horse's importance in the Chinese culture before giving his opening remarks.

“St. Lucia Pearl of the Caribbean is a project that will be constructed with the people and for the people,” Teo said to an internationally diverse crowd of about 150 people. “It will drive new opportunities across the nation and establish industries like international tourism, leisure, retail, digital media and racing. It will create a new equine industry with the building of a state of the art racecourse right where we are sitting. That will create a positive economy and we believe we will be a uniting force in the country.”

Prime Minister Chastanet expressed similar optimism and enthusiasm in his speech a few minutes later. In his speech, he also stated that the first race would be held this time next year, a statement supported by Teo in discussions earlier in the day.

“This project when it was presented to me was bold, courageous and different,” Chastanet said. “The idea of building a world class horse racing track here in St. Lucia with horse racing as only the beginning part it. It will create jobs for young people, particularly here in the south. You hear the numbers with 45% unemployment among our youth. I meet so many of them that want something to do and something that they could be great at. This is going to create opportunities for them to become professional, an opportunity to become world class.”

As Chastanet inferred, while racing may be new to St. Lucia, horses are not. Driving around the island during the day's activities, guests could see horses grazing just about everywhere, as well as several barns hinting at the island's hearty equine community. Local horseman and entrepreneur Winston Trim has been a major force in helping spearhead this movement to bring racing to his country.

“Bringing this project to St. Lucia has been very close to my heart being that my family has been in the local equine industry for over 75 years,” Trim commented. “Living in the U.S. for 24 years and attending the races at several different tracks, I saw an opportunity to bring racing to St. Lucia. I think racing will bring St. Lucia to the world as well as bring the world to St. Lucia. On the local end, we have a large population of equine enthusiasts and it will open doors for them to take part in the equine community on an international level.”

John Warren, bloodstock advisor to Her Royal Highness Queen Elizabeth II, is the Chairman of CHC's International Advisory Board and was on hand for this weekend's event.

“I think the real relevance is quite a significant number of islands in the Caribbean have racing as their core interest,” Warren commented. “They have been historically associated with racing, which means it's in the DNA of the local people, so it is not plucked out of the blue to come into an environment like this. This project was put forward as state of the art in its region. There is an opportunity here to breed a significant number of horses and there is nothing like indigenous stock.”

The English native added, “The timing of this whole project is incredibly important for the island to seem to not be sleepy and inactive, but it is a proactive country. The fact it coincides with Prince Harry's visit is important because a lot of the events Prince Harry has been attending have not been stimulating growth and development. I think this is an opportunity for him to see something and the Prime Minister to take full advantage of showing him what could be a wonderful asset to the island.”

Warren also spoke on the project's significance to racing on an international level.

“This project gets publicity, so let's promote something that is an incredible industry,” he remarked. “None of the other sports, can do what racing does, which is socially bring people together. It connects families and business acquaintances. There aren't many sporting events where you don't have to sit quietly in your seat and jump up and down when something happens. I think we just have to find ways of supporting and promoting our industry. The China Horse Club has done this through this event. We need to find ways to say, 'Come on in. Join us! Don't be frightened.' We have to work a lot harder I think on promoting our sport.”

The final step in getting this important project underway took place early Saturday morning at the Prime Minister's residence, where Teo and his team met with Chastanet to sign the final paperwork.

When Teo first attempted to bring racing to St. Lucia, he was met by some opposition from the previous government, but when Chastanet and his party took over this summer, the Pearl of the Caribbean project was made a priority.

“You have a country here and a government that is motivated to do something unique and special,” said CHC's Vice President Eden Harrington. “St. Lucia is trying to make a real difference in their future and tourism drives their future. It generates 65% of their economy and they are trying to become a more sophisticated tourism destination.”

Harrington continued, “America is their biggest tourism portal, but if you are American you have to fly past all these other Caribbean islands to get here. So, why do you come to St. Lucia? There has to be a special reason. They have to do something better and more unique than everyone else and that is what they are trying to do here.”

Chastanet expressed similar sentiments to the small group seated in his conference room just moments after signing the official papers.

“I think that horse racing helps us differentiate ourselves from the other places in the Caribbean,” Chastanet stated. “We think it puts us as part of an international fabric. We look at the international circuit of horse racing and St. Lucia is very ambitious in its desire to become part of that family. To be able to get a person like Mr. Teo Ah Khing to make this kind of investment and put in this infrastructure, we think will go a long way towards building and helping us succeed in that part.”