Spun To Run Looks to Build Upon Dirt Mile Success 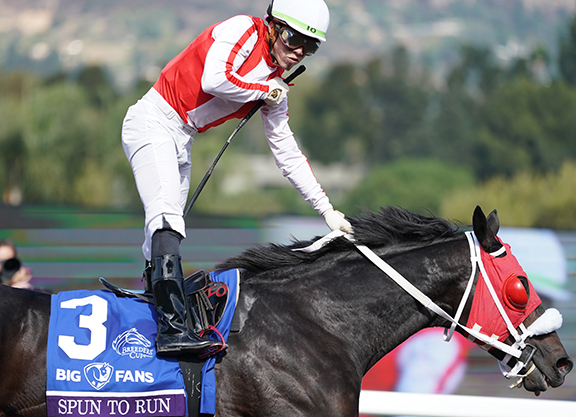 2019 Breeders' Cup Dirt Mile winner Spun to Run is set to begin his career at stud at Gainesway Farm. | Horsephotos

In just its first 14 years of running, the GI Breeders' Cup Dirt Mile has emerged as a stallion-making race and in recent years, its winners are making top headlines as they kick off their stud careers.

Goldencents (Into Mischief), winner of both the 2013 and 2014 edition, now leads his class of third-crop sires. The following year's winner, Liam's Map (Unbridled's Song), is already a two-time Grade I producer with his first crop of 3-year-olds while 2016 champion Tamarkuz (Speightstown) now has a Grade III winner in his first crop of juveniles. The subsequent winners in the late Battle of Midway (Smart Strike) and City of Light (Quality Road) are still waiting for their first runners, but initial first crops are already turning heads both on the farm and in the sales ring.

Last year's Dirt Mile Champion Spun to Run (Hard Spun) retired to Gainesway Farm this year and will stand his initial season at stud for $12,500.

“Spun to Run is a horse that we're very excited about,” said Gainesway's Director of Stallion Sales and Recruitment Sean Tugel. “Certainly his Breeders' Cup Dirt Mile win was his marquee victory and he did it very easily. He did it by widening lengths. On that day he ran a 109 Beyer and he certainly made everyone realize the type of talent he had.”

Prior to his Breeders' Cup victory, the Juan Carlos Guerrero-trainee blossomed in the later half of his sophomore season, finishing third in the GI Haskell Invitational S. behind Maximum Security (New Year's Day) before taking the GIII Smarty Jones S. and later earning a 110 Beyer in the M.P Ballezzi Appreciation Mile S.

“It was a very strong 3-year-old campaign,” Tugel said. “He ran a `zero' five times on Thorographs, which was very good. He's a horse that showed brilliance, and brilliance makes sires.”

Following his Breeders' Cup victory, Spun to Run wrapped up his sophomore season with a runner-up effort behind Maximum Security in the GI Cigar Mile H. While prepping for the 2020 GI Pegasus World Cup Invitational, an injury forced the dark bay to scratch and ultimately retire.

“It was bad timing,” Tugel said. “[Owner Bob Donaldson] had a big 4-year-old campaign planned out for him. Unfortunately it didn't go as the owner had hoped, but that allowed us to go out and get him. It was an injury that took time to come back from, and unfortunately he missed the breeding season and the racing season this year. But certainly he's a young horse still, he's turning five, and he's let down beautifully in his time off from training. I think people are going to be very excited when they see him.”

The son of Hard Spun is out of the stakes-winning Grand Slam mare Yawkey Way and his half-sister Tap It All (Tapizar) is also a stakes winner.

“Certainly the Danzig sire line has been a sire line that has been dominant throughout the world, not only in America but in Australia and Europe,” Tugel said. “The fact that his first three dams are all juvenile winners and his first dam was a juvenile stakes winner at Saratoga makes it very exciting to think that speed and precocity is going to be passed on through his offspring.”

Tugel added that he finds Spun to Run to represent the best blend of Grand Slam and Hard Spun.

“He has a beautiful shoulder and a beautiful amount of bone,” he said. “You see a lot of that Grand Slam and Gone West in through his neckline and jaw. The strength of his hind leg is a great benefit that he gets from his bottom side. He's a beautiful mover and he has a lot of leg to him. I think he's a true miler, and milers make stallions.”

Tugel said that breeders have been impressed by the million-dollar-earning miler as he nears the start of his stud career.

“The breeders that have seen him so far have really liked him,” he said. “He's a horse that kind of grabs your imagination as soon as you see him. He has a personality and an intelligence. He's a horse that captivates the breeders when he walks out and that's what drew us to him.”