Sprinter In Newmarket For The Long Haul 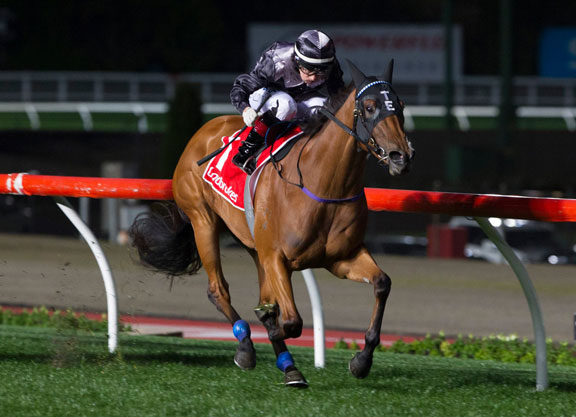 NEWMARKET, UK–Over the years, Newmarket's Abington Place has provided a temporary home for a number of Australian equine visitors, including Black Caviar (Aus) (Bel Esprit {Aus}) and Takeover Target (Aus) (Celtic Swing {GB}), in the run up to Royal Ascot.

The latest star incumbent, the 2017 Magic Millions 2YO Classic winner Houtzen (Aus) (I Am Invincible {Aus}), is having more than just a mini-break and, having arrived at the end of March, is likely to be in town for most of the British turf season, with a tilt at the G1 King's Stand S. merely the start of what could be a lengthy international campaign.

The 4-year-old is the standout of Toby Edmonds's string of around 90 horses on Queensland's Gold Coast and, under the care of the trainer's son Trent and Peter Brown, she has settled in well to the box once occupied by Black Caviar back in 2012. Like her travelling mate Acqume (Aus) (Sepoy {Aus}), Houtzen is now owned outright by Aquis Farm.

“She had only had a week of work when she came here so she had her first gallop last Tuesday,” says Trent Edmonds. “We thought we'd come a little bit early and prep her here specifically.”

The visitors can rely on gaining some local knowledge from fellow Australian Jane Chapple-Hyam, who trains from Abington Place, once home to the Wragg family and now owned by South African owner-breeder Mary Slack.

“Jane has been a great help and because we're here for quite a while it's been good to have a look at all the different gallops,” Edmonds added. “The facilities are fantastic. We're trying to replicate what we do at home with both of the mares, and a big thing at home is to try to vary things and keep them enthused and happy. After Houtzen runs at Ascot she'll go to a paddock for a week and then come back into work–that's what we do at home and she loves it.”

Houtzen, the winner of seven of her 18 races, including Group 3 contests in Melbourne and Sydney, as well as more than A$2- million in prize-money, exercises in a hood but appears to be pretty settled in her daily excursions on the bustling Newmarket Heath.

“She was a bit fizzy when she was younger but the older she's got, the better she's got, and especially being here she is just so much more relaxed,” says Edmonds. “Sometimes we go out with Jane's string. She's pretty laidback but once you get up over her neck she switches on. She knows when it's game day.”

Her first big game will come on the opening day of Royal Ascot in the G1 King's Stand S., with a G1 Diamond Jubilee S. entry also having been made. Later in the year, there's the possibility of a trip to Paris on Arc weekend, followed by the Breeders' Cup.

Edmonds says, “It's 99% certain that she'll run in the King's Stand but if there was some issue, or if the track came up wet on the Tuesday, then she'd run on the Saturday, but that's really just a back-up plan.

“If she performs well then there's a stack of races over here. She's effective at 1200 metres but we're probably not looking at the July Cup. We were thinking about spacing her races more, so after the King's Stand we would possibly look at the Nunthorpe [in August]. She's dynamite fresh up. We could then look at the Prix de l'Abbaye. We're basically here for the whole season. She has to perform and her first race will tell us that. If she performs well then we just keep staying on and the dream would be to take her to the Breeders' Cup for the Turf Sprint–1100 metres round a bend, that's ideal, and she's run well on tight tracks before.”

Toby Edmonds will take a short break from his responsibilities at home to pay Houtzen, Acqume and his son a short visit in Newmarket in around a month's time before returning with the whole family in time for Royal Ascot. Acqume may well have made her British debut before then, with the aim being to add some European black type to the stakes placing she has on her Australian record. As for her stablemate Houtzen, Trent Edmonds is acutely aware of how the success of the A$105,000 yearling has helped his family.

He says, “We didn't pay much for her as a baby and she's earned a stack of money and started favourite for the Golden Slipper. She's been a dream. We have 92 horses and before she came along we had maybe half that number, so she's just done wonders for our business. We're not at the top of the tree but we're always working on improving the quality of our horses and trying to get the bigger winners. A Royal Ascot winner would be huge.”