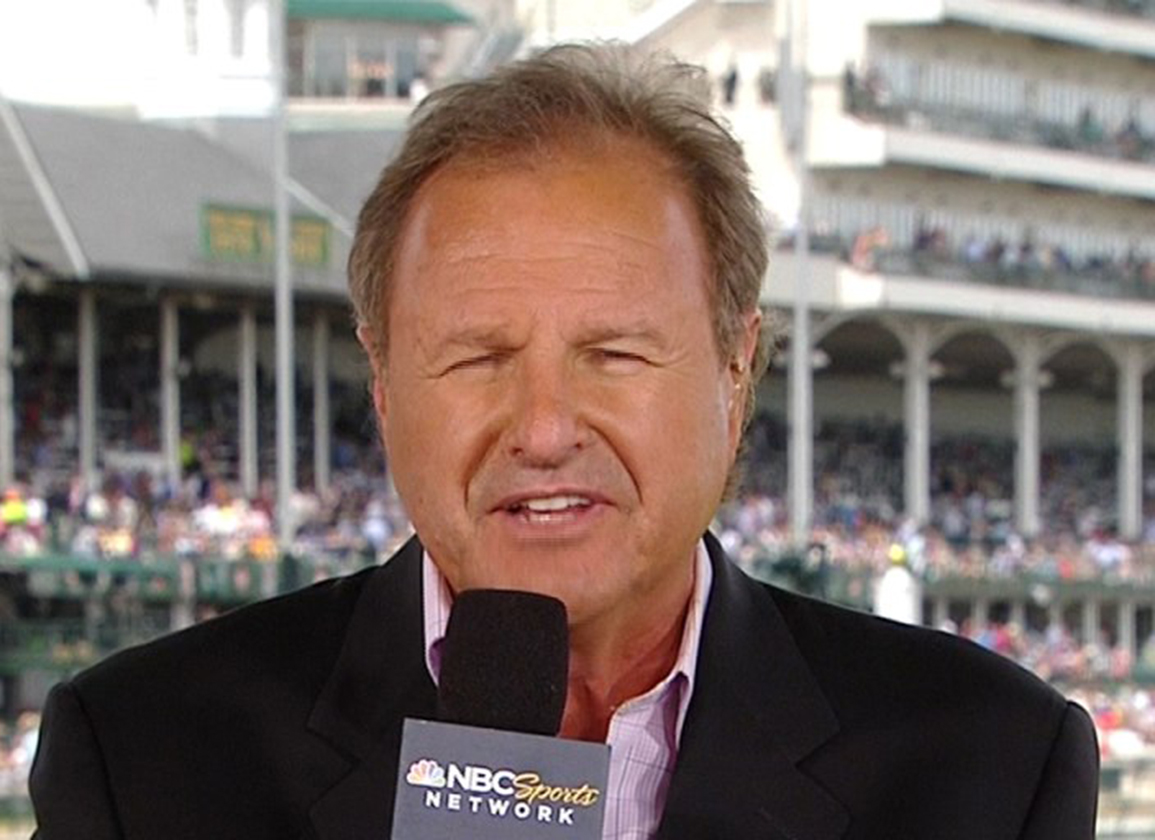 Bob Neumeier, whose career as a sportscaster included a long stint with NBC's horse racing team, died Saturday. He was 70.
In 2014, Neumeier, known as “Neumy,” suffered a stroke and had battled health ailments ever since. Boston radio host Tony Massarotti reported that Neumeier died from heart disease/congestive heart failure.

A graduate of Syracuse University, Neumeier broke into broadcasting 1975 as the radio play-by-play man for the Hartford Whalers. In 1981, he was hired by WBZ-TV in Boston, where his duties included working as the weekend sports anchor. He was there for 20 years.

“We are saddened to offer our condolences to the friends and family of Bob Neumeier, who passed away last night,” an NBC spokesperson said in a statement. “In the midst of a prominent career in Boston, Neumy joined NBC Sports and for more than two decades was a beloved member of our family working on horse racing, football and Olympics, among other events. Our thoughts are with Bob's wife Michele, and the many sports fans to whom he meant so much.”

While at WBZ, he also served as the play-by-play commentator for the Boston Bruins.

After leaving WBZ, Neumeier went to work at WEEI, an all-sports radio station in Boston. From 2002-2005, Neumeier served as co-host with Dale Arnold on the station's midday “Dale & Neumy” show. After leaving WEEI, Neumeier covered such events as the Tour de France and the Turin Olympics, as well as racing's biggest events. He also hosted a show on Comcast SportsNet New England.

“It saddens me to report that my friend and former partner, Bob Neumeier, passed away yesterday,” Arnold tweeted Sunday. “Neumy was one of a kind, and all who knew him were better for it.”

“The Boston Bruins are saddened by the passing of our former radio play-by-play voice and longtime Boston sports media personality Bob Neumeier,” read a tweet from the Bruins. “We send our thoughts and condolences to Bob's family, friends, and colleagues.”

“We were very saddened to learn today of the passing of Bob Neumeier,” said the Breeders' Cup in a statement. “Bob was a big part of the NBC Breeders' Cup World Championships broadcasts for many years as a handicapper, reporter and analyst. Bob brought his expertise of Thoroughbred racing and a great sense of humor to every show. We extend our sincere condolences to Bob's wife Michele and to his extended family.”

In 2009, he collapsed while covering the GI Kentucky Oaks for NBC and was briefly hospitalized.

The 2014 stroke, which occurred shortly before he was to leave to California to cover the Breeders' Cup, required 5 1/2 hours of surgery and involved a stay in an intensive care unit. He went back to work seven months later.

“I was really nervous,” Neumeier told the Boston Globe about his return to the airwaves. “I didn't think there would be [butterflies], but there were. There's a lot of people involved here, colleagues and cohorts. They have an eye out, to see how I'm doing. Viewers have an eye out. People are saying, 'What is he doing? What does he sound like? What does he look like?' I didn't want it to be a freak show, not that it would have been. I just wanted it to be seamless. Maybe they missed me, maybe they didn't, but I wanted [viewers to think] my work would be the same. Maybe even better. That was how I thought about it.”

An enthusiastic racing fan, handicapper and horseplayer, Neumeier was a staple of NBC's horse racing coverage for several years as he covered the Triple Crown, the Breeders' Cup and other major events. Along with Mike Battaglia, he was one of the network's go-to analysts for handicapping insights and betting advice. He had a smooth but dry delivery and an ability to relate to the $2 bettor.

The National Academy of Television Arts & Sciences Boston and New England Chapter honored Neumeier with its Silver Circle Award in 2017.