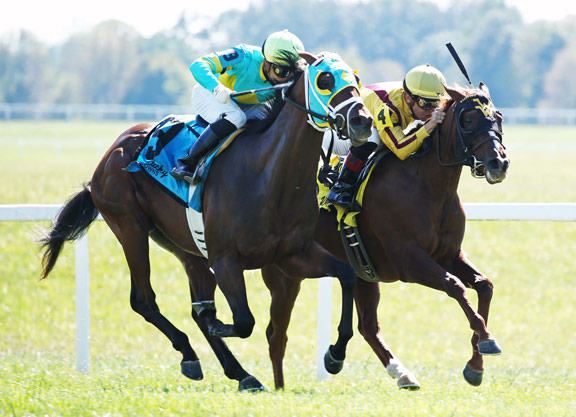 Cambria kept her perfect record in tact and earned her black-type badge by defeating of males in the $500,000 Kentucky Downs Juvenile Turf Sprint S. Saturday. A debut winner on the Presque Isle synthetic May 20, she followed suit with an optional claimer score there July 30 and prepped for this with a pair of bullets in Keeneland, most recently working a best-of-22 half-mile in :46 flat Aug. 30. Given an 8-1 chance in this turf bow, the homebred raced off the rail in fourth through an opening quarter in :22.91. Unleashing a powerful late turn of foot in the lane, the chestnut inhaled the leaders in a matter of strides and battled a late-closing Chimney Rock to the wire, holding off that foe for a narrow score.

“She put in a big effort today,” said winning rider Tyle Gaffalione. “She fought hard. Today was the first time she actually was challenged. She showed how much heart she has. All the credit goes to Wesley and his team. They had her 100% ready today.”

“She’s a petite filly but she has the stride of a big horse, just like her mom who raced for us,” said winning owner Barbara Banke. “She’s an awesome horse. This is her first stakes victory so thank you Kentucky Downs. Her mother had this great balance and stride and so does she. And they’re both fast.”

Cambria, who is the 106th stakes winner for Speightstown, is the second foal and second winner out of GII Top Flight H. victress Teen Pauline. Her first foal Principled (Medaglia d’Oro) broke his maiden at Belmont when last seen May 11, and she has since produced a yearling filly by Uncle Mo and a weanling colt by Into Mischief. Click for the Equibase.com chart or VIDEO, sponsored by Fasig-Tipton.