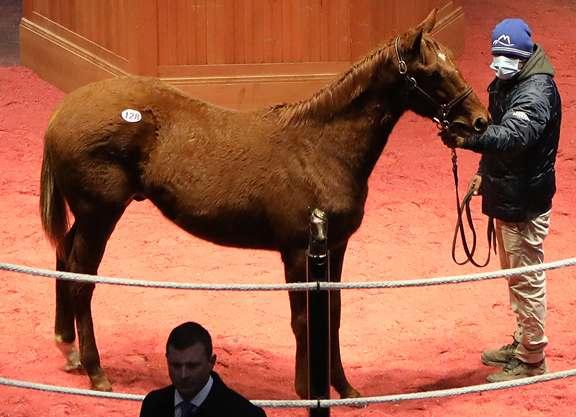 A yearling colt by Speightstown (hip 128) brought the top price during Monday's opening session of the Fasig-Tipton Winter Mixed Sale when bringing a final bid of $165,000 from Calumet Farm. Consigned by Stuart Morris, the yearling was one of four offerings to bring six figures during the day.

“I thought the activity today was very encouraging,” said Fasig-Tipton President Boyd Browning, Jr. “A lot of horses got moved at fair prices. It was a fairly consistent marketplace with no real surprises. There was significant demand for what were perceived to be the quality offerings and there was reasonable trade for the less expensive offerings. I'm not going to say it was crazy, but there was activity.”

“He's a lovely colt with a lot of future in him,” Morris said. “He's a late April foal and had all of the right parts and pieces. He's very athletic with a good walk and great balance. He was good and correct, but he was definitely going to be a horse with a lot of improvement and growth in him because of his birthday. We were happy with the result and very flattered that an operation like Calumet bought him from us. We are wishing them the best of luck and we're hoping they can make him one of their stakes horses.”

The colt is out of Royal Ancestry (Distorted Humor), a full-sister to Grade I winner Awesome Humor and the dam of stakes-placed More Royalty (More Than Ready). Stuart Morris signed the ticket to acquire the then-11-year-old mare for $9,000 at the 2019 OBS Winter Mixed Sale.

“She was a beautiful mare with a great pedigree under her and some nice production,” Morris said of that purchase. “But she had had some production history issues around the time that we purchased her. We spoke to the folks taking care of her and felt that it was something we could manage and we got her bought for a fair price because of her production history. We got her home and she's just been an absolute star for us. She had this foal late last year and we didn't breed her back just because it was a late cover. She is back on the books this year and I believe she's going to go to Bolt d'Oro for my father.”

The Fasig-Tipton Winter Mixed Sale continues with what is expected to be a lively final session Tuesday.

“We've got a really nice group of horses to sell tomorrow,” Browning said Monday evening. “There are some high-quality offerings in the supplement and I think we'll have some fireworks tomorrow. And we'll have some really nice horses throughout the day.”