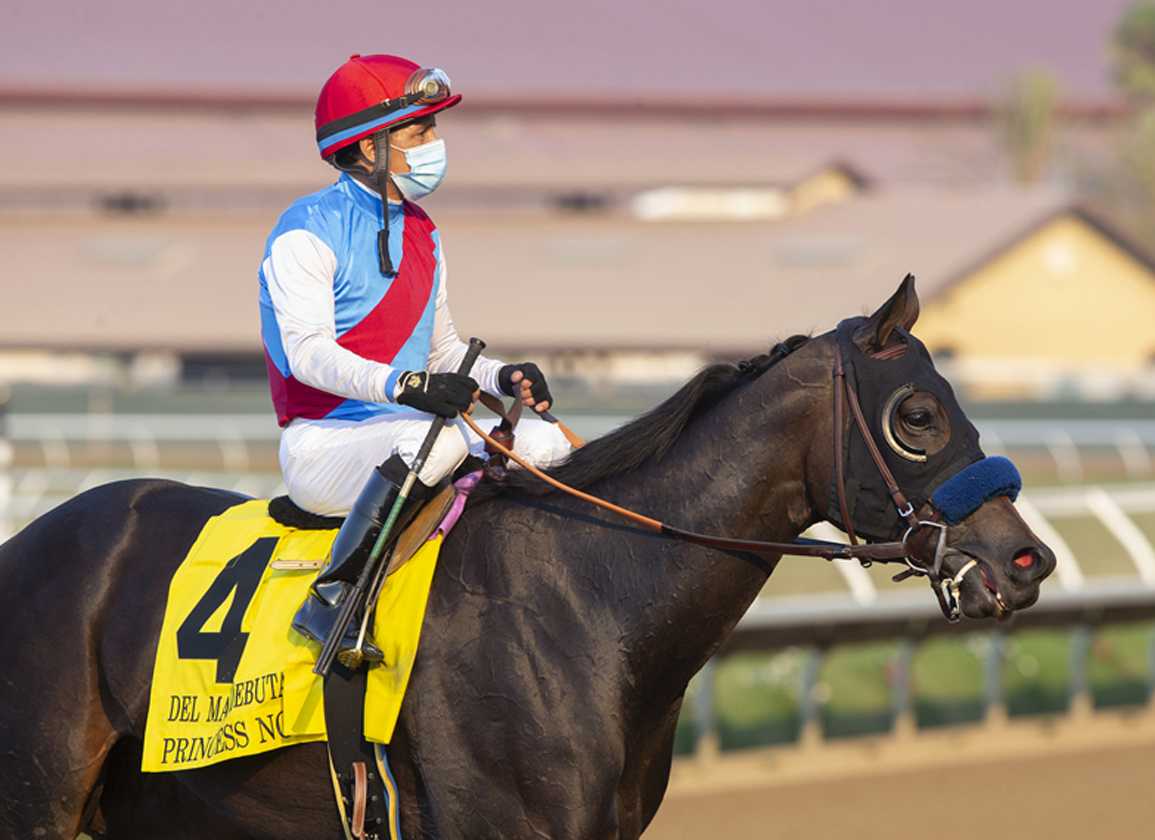 Read on for our visit with the connections of GI Del Mar Debutante S. victress Princess Noor | Benoit

Princess Noor (Not This Time – Sheza Smoke Show, by Wilko) proved her status as racing royalty several times over through her accomplished juvenile campaign. Now a three-year-old, she prepares to go through the ring at the Fasig-Tipton 'Night of the Stars' Sale carrying a foal by leading sire Into Mischief.

A product of the first book from this year's leading second-crop sire Not This Time, she quickly stamped her status as one to watch as the sales topper of the 2020 OBS Spring Sale after a dazzling breeze show performance. A 'TDN Rising Star' on debut and the victress of two graded stakes at two, she took those first three career starts effortlessly by a total of nearly 20 lengths.

“It's really a unique package,” said Fasig-Tipton's Boyd Browning. “You've got a Grade I winner in foal to Into Mischief and she's three years old. You're talking about the opportunity to breed her for a number of years with the likelihood of her being able to produce a number of foals by top stallions around the world.”

The brilliant Zedan Racing Stables colorbearer will be consigned as Hip 222 with Taylor Made Sales on Nov. 9.

“She was the fastest 2-year-old of her crop and she has a great mind to her,” said Taylor Made's Joe Taylor. “She had that desire to win and I think that's something she's going to pass on to her foals. She's by Not This Time and she's in foal to Into Mischief, so you talk about speed on speed. Not This Time was a very fast 2-year-old and Into Mischief obviously produces all kinds of [fast 2-year-olds] and was one himself.”

“One of the things that buyers are really going to like when they come to the sales grounds is the opportunity to see Princess Noor in person,” Browning explained. “Physically, she is just beautiful. She is an outstanding representation of what you look for in a racehorse and what you hope to have in a broodmare.”

Taylor remembers first seeing Princess Noor as a yearling when she went through the Taylor Made consignment at the 2019 Keeneland September Sale.

“She just had a great demeanor about her,” he recalled. “She was one of those horses that looks off in the distance and is paying attention to something two barns away. I've seen so many intelligent fillies like her go on to be great racehorses.”

“She looked like a rocket ship,” Jimbo Gladwell recalled of the filly when she first began the breaking process. “She was going to be an early filly her whole life. She did everything right and was a superstar from the beginning. With all the babies when we start out, they're all in the same routine. Every time they took a step, she was one step ahead of everybody else. She was very easy to spot. Anybody that would come to the farm wanted to know who she was.” 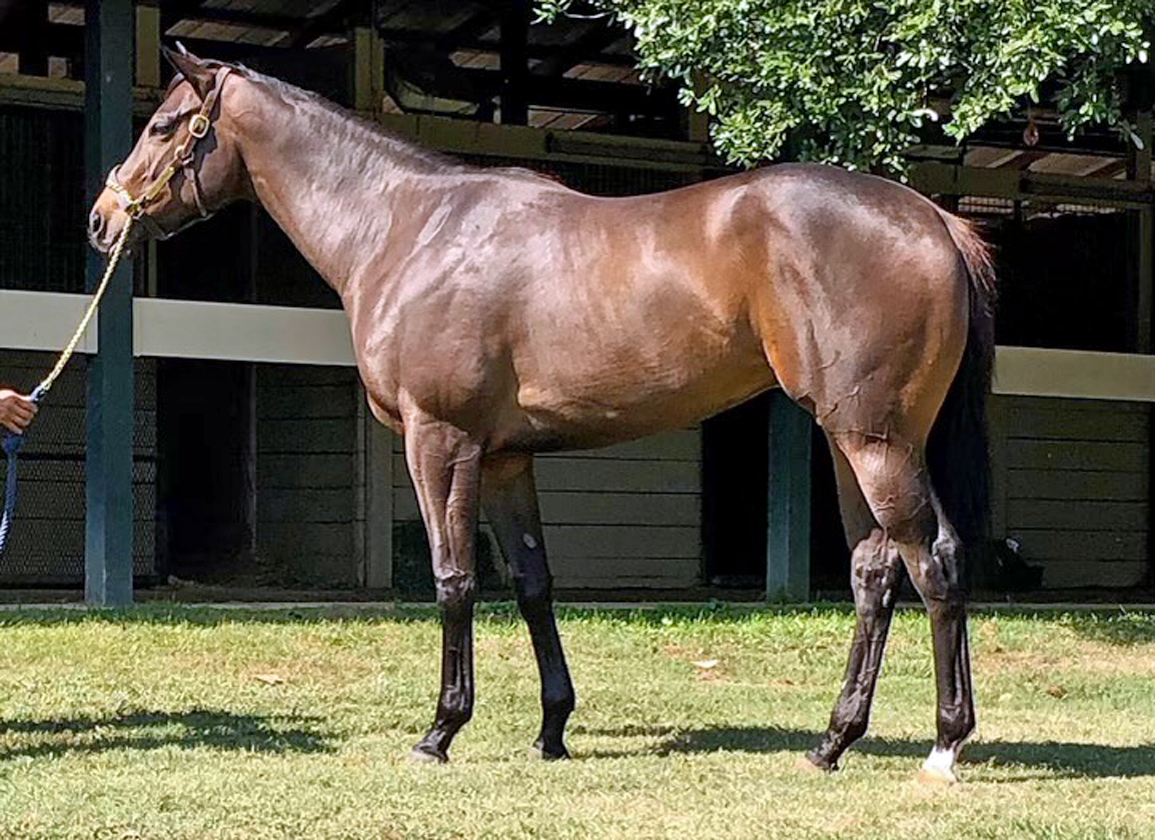 A 2-year-old Princess Noor before selling for $1.35 million at the OBS Spring Sale | Top Line Sales

Gladwell has a distinct memory of the day he realized just how much potential his young trainee might have.

“I had a guy out at the farm that was looking to buy some two year olds privately. This particular agent called me and it was kind of an unscheduled visit. When we let her work, she just showed out and it was phenomenal. That was when everybody just went, 'Wow.' It was the first time we really let the reins loose and she showed up. Right then, we knew that we had something special.”

While the Top Line team had originally planned to send their star filly to the Fasig-Tipton Gulfstream Sale, the boutique auction was cancelled in 2020 due to the pandemic. Instead, she was slated for the OBS Spring Sale.

“We were so excited because you never ask them to go wide open, but our expectations were that she could be the fastest filly in the sale,” Gladwell said, recalling the days leading up to her breeze. “When we got there, she was like the third or fourth day of the show so it wasn't right away that we got to find out and everybody was on pins and needles waiting. But when we got to lead her up there, we knew we were fixing to see something special.”

Princess Noor recorded the fastest quarter-mile breeze of the sale in :20 1/5.

Taylor was also on-site at OBS and was able to get a good look at the daughter of Taylor Made's Not This Time.

“She tied the track record at a quarter-mile breeze and looked great on the gallop out,” he recalled. “We just knew she had a ton of talent.”

Princess Noor sold for $1.35 million to Gary Young, topping the sale and becoming the Gladwell's first juvenile offering to surpass the million-dollar mark.

“It was unbelievable,” Gladwell recounted. “We had a pretty good feeling that she could bring a million dollars. There were a lot of agents after her, big time guys, and I think there were three or four guys over a million, which is crazy at the 2-year-old sales. It was a day we'll all remember.

Sent to Bob Baffert, the much-talked-about prospect made her debut in August at Del Mar and ran to her price tag when she became a 'TDN Rising Star' in her wire-to-wire victory. From there, it was on to the GI Del Mar Debutante S.

“It was her first graded stakes race and everybody was hoping she doesn't bounce off of her first effort and that she was the real deal,” Gladwell remembered. “At the top of the stretch when [jockey Victor Espinoza] let out a little bit, she just opens up and it makes the hair stand up on your arms.” 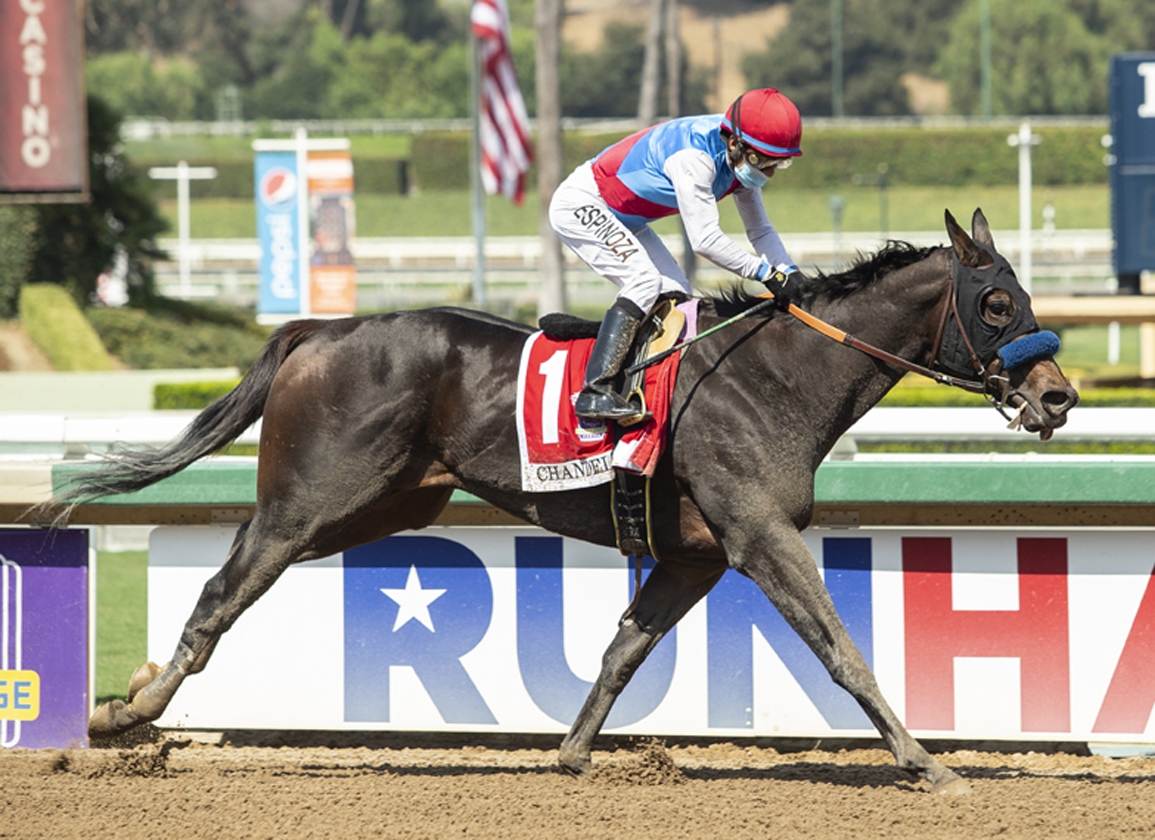 Princess Noor romps to an 8 1/4-length win in the GII Chandelier S. | Benoit

Following the 6 1/2-length Grade I win, the dark bay filly continued her domination of her division in the West Coast with a third straight victory in the GII Chandelier S., defeating next-out GI Starlet S. winner Varda (Distorted Humor) at a mile and a sixteenth.

“She could carry her speed and she was a superstar,” Gladwell said. “She had a natural turn of foot and she could just run them flat off their feet. That's the name of our game, speed, and she was the queen of it.”

After incurring a soft-tissue injury in the GI Starlet S., Princess Noor was retired from racing at the end of her juvenile season.

“Princess Noor's two year old campaign was simply brilliant,” Browning said. “You watch her races and you're saying, 'Wow, did she really just do that?' She was very accomplished on the racetrack and unfortunately, she suffered an injury which led to her retirement.”

“What made her such a great racehorse was her precocity and speed,” Taylor added. “She always looked like she was ready to run. She was a 'TDN Rising Star' first time out and from there, she excelled and could have done a lot more I think. Victor Espinoza had her throughout her career and he said that she was the fastest 2-year-old filly that he had the chance to ride.”

Taylor shared that for Princess Noor's owner, Amr Zedan, the filly has come to be the horse of a lifetime as the namesake of his wife, Princess Noor bint Asem.

“He obviously loved this horse enough to name her after his wife and she's his first Grade I winner,” Taylor said. “She holds a special place in his heart and on top of that, he's friends with the breeder, Oussama Aboughazale of Sumaya Farm. They've known each other for years and he's been giving him a lot of guidance in getting into the game. So it's a pretty cool story and we're thrilled to be working with them.”

Princess Noor is out of the Wilko mare Sheza Smoke Show, winner of the 2014 GIII Senorita S. Her granddam Avery Hall (A.P. Jet) is also a stakes winner.

“One of the intriguing elements of Princess Noor's pedigree is the influence of Not This Time,” Browning noted. “He's off to a tremendous start with his first crop of 3-year-olds this year. When you look and see how regally-bred he is, he's by a Giant's Causeway and out of arguably one of the top broodmares in the United States in Miss Macy Sue (Trippi),so it's a great depth of pedigree. The Not This Time influence really gives her great potential as a broodmare down the road.”

For Gladwell, he said the filly's racing career has marked an important achievement for Top Line Sales and he is now looking forward to watching her future success as a broodmare.

“She really cemented that we can sell a good horse,” he said. “She was one of our first Grade I winners and any time somebody spends that kind of money at the 2-year-old sales, everybody is rooting for them. I think for her, she's one that's got an electric turn of foot, I think she crosses with about anybody you want to breed her to and she's a big, beautiful mare. So I think she's got a big shot of being a superstar and a blue hen.”