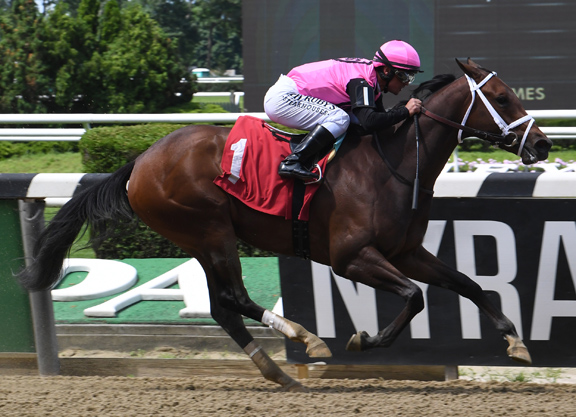 Fierce Lady (Competitive Edge) given a 9-2 chance facing fellow New York-bred maiden fillies Saturday at Belmont, became the third winner for her freshman sire (Super Saver) and a 'TDN Rising Star' to boot after blitzing her foes in head-turning fashion. Fastest away from her rail draw, the dark bay was scrubbed on to maintain the edge over favored fellow firster Violent Point (Violence) through a sharp opening quarter of :21.82. Looking like a lock as she headed for home with a clear advantage, Fierce Lady was never fully asked by Javier Castellano in the lane while streaking home six lengths to the good and stopping the clock in a swift :56.47. Munnings Muse (Munnings) was another nine lengths clear second, while Violence Point held on for third.

“We knew she had speed from the way she worked at the sale,” Magner told the TDN. “So once we got her into a routine, got her caught up on her gate work it was really no surprise. She is a quality filly and she's been training the right way the entire time.”

Fierce Lady is a half-sister to Bluegrass Jaboree (Bluegrass Cat), SP, $297,790 and a yearling filly by Brody's Cause. Her dam, who was a debut winner herself as a juvenile at Saratoga and stakes-placed later that year, is half to New York-bred MSW Swag Daddy (Scat Daddy) and to GSP What a Tale (Tale of the Cat), who cost $750,000 at the 2006 Keeneland April 2-year-old sale. Second dam Mrs. Filio (Eastern Echo) was a second-out graduate at two, and third dam Mrs. Flagler (Hoist the Flag) was a first-out winner and GSP as a baby. Fourth dam Mrs. Warren (Hail to Reason) was a multiple Grade I winner in her juvenile season.