Speedster Break Even Stays Unbeaten While Taking to Turf at Saratoga 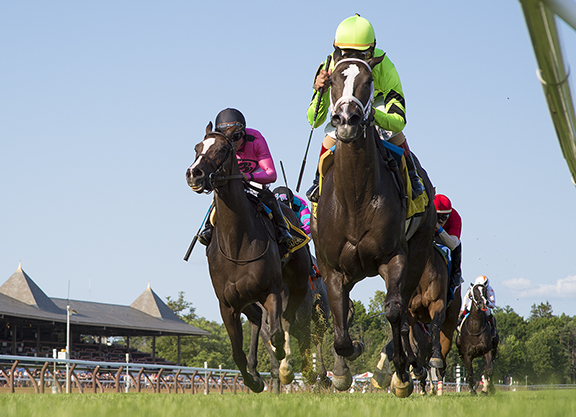 The brilliantly fast and undefeated Break Even had never been seriously threatened in five tries on the dirt, and showed that her impressive speed could translate to the turf too with another jaw-dropping display Sunday. A five-length romper in a rained-off Fair Grounds heat on New Year’s Day that produced four other next-out winners, the Klein homebred cleared her first-level allowance condition later that month before resurfacing to run away with Oaklawn’s Purple Martin S. Mar. 30. She made the grade and handled seven furlongs just fine when taking Churchill GII Eight Belles S. by 5 1/2 lengths on GI Kentucky Oaks day May 3, and had last been seen holding on in Belmont’s June 9 Jersey Girl S. Emerging with the early advantage without exerting much effort, the dark bay sped away to post a lightning-fast opening quarter of :21.03. She got the half in :43.50 while still just cruising along, and was kept to task late by Shaun Bridgmohan to keep finding up front. The winner has a yearling full-brother.

“She does it easy. It’s not a run off. She’s very relaxed,” said owner Richard Klein. “We’ve had a lot of nice horses, but this may be the nicest we’ve ever had. To start six-for-six; she’s been at five different racetracks; she’s been on the turf, slop, dirt, seven-eighths, three-quarters, five and a half [furlongs]. She’ll do whatever you ask her to do… “We’re going to definitely look at the [Aug. 31 GII] Prioress and there’s a turf sprint here at the end of the meet. I just want to take care of her, and we just want her to be happy. She’ll tell us when she’s ready to run.”