'Special Filly' Swiss Skydiver Will Be Missed at McPeek Barn 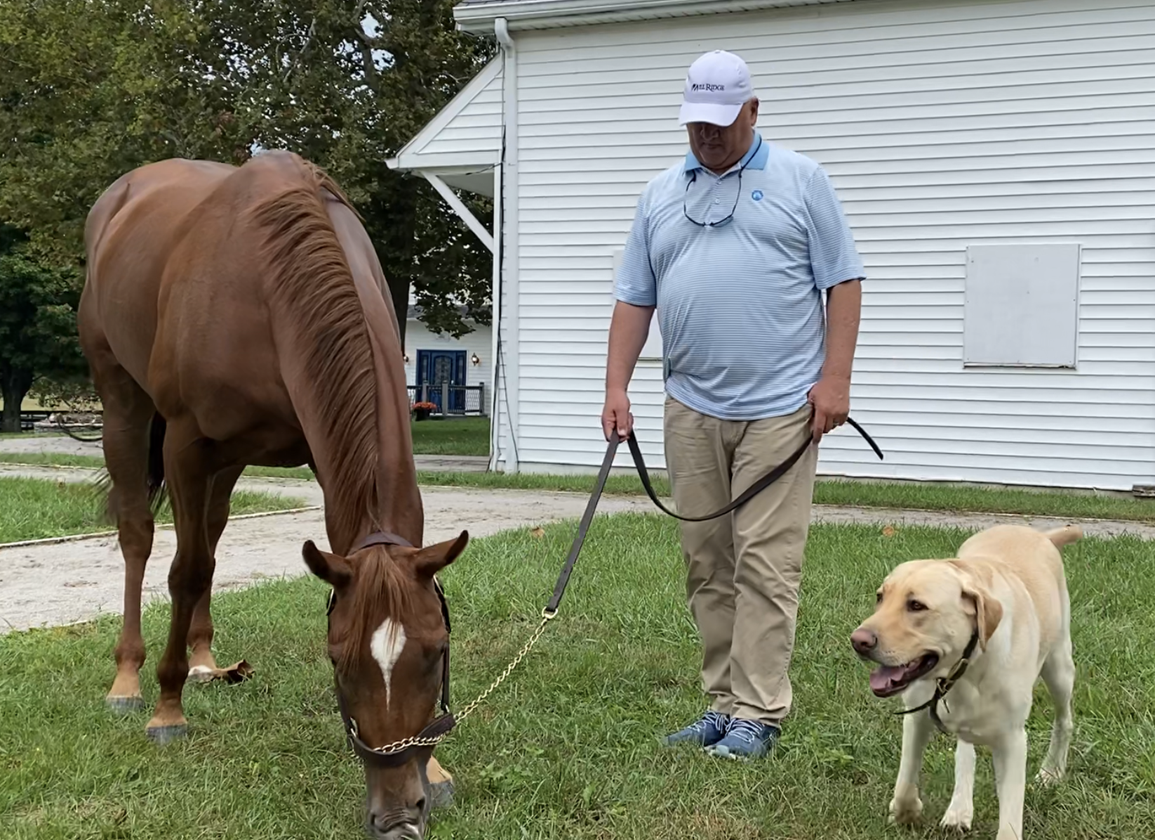 Read on for our visit with Swiss Skydiver, Kenny McPeek and Sonny. |         Katie Petrunyak

In just a few weeks, champion Swiss Skydiver (Daredevil – Expo Gold, by Johannesburg) will sell at the Fasig-Tipton 'Night of the Stars' Sale. On an evening heralded for its abundant opportunity, her trip through the ring will be marked with anticipation for what is to come as she begins her broodmare career. But until then, there's just a bit of melancholy for her fans in looking back on her remarkable racing career.

What was it, exactly, that made Swiss Skydiver so unforgettable?

It could have been her extraordinary toughness and durability. The filly's Eclipse-earning sophomore season was unlike any other as she competed in 10 stakes races at nine different racetracks, crossing the wire first in half those starts. During a year of the unprecedented in 2020, it became altogether familiar to find Swiss Skydiver in the entries nearly every month.

Or maybe it was the grit and bravery she displayed so magnificently in her historic GI Preakness. S., refusing to let Authentic inch past her white shadow roll. Every racing fan remembers exactly where they were watching as she battled to become the sixth filly in history to win the Preakness S.

Even still, it could have been her intelligent personality, which Kenny McPeek shared with her many admirers through social media as they journeyed to racetracks across the county.

Perhaps the fierce chestnut's uniqueness shines through in all of those elements, each one an important element in the story of Swiss Skydiver.

A member of the first crop of Daredevil, Hip 2997 was a half-sister to two winners and the granddaughter of GSP Clouds of Gold (Strike the Gold), but it wasn't her pedigree that caught the eye of Kenny McPeek.

“She was a big, beautiful filly with a great walk to her and a great energy,” the agent said, recalling even the barn at which he first laid eyes on her. 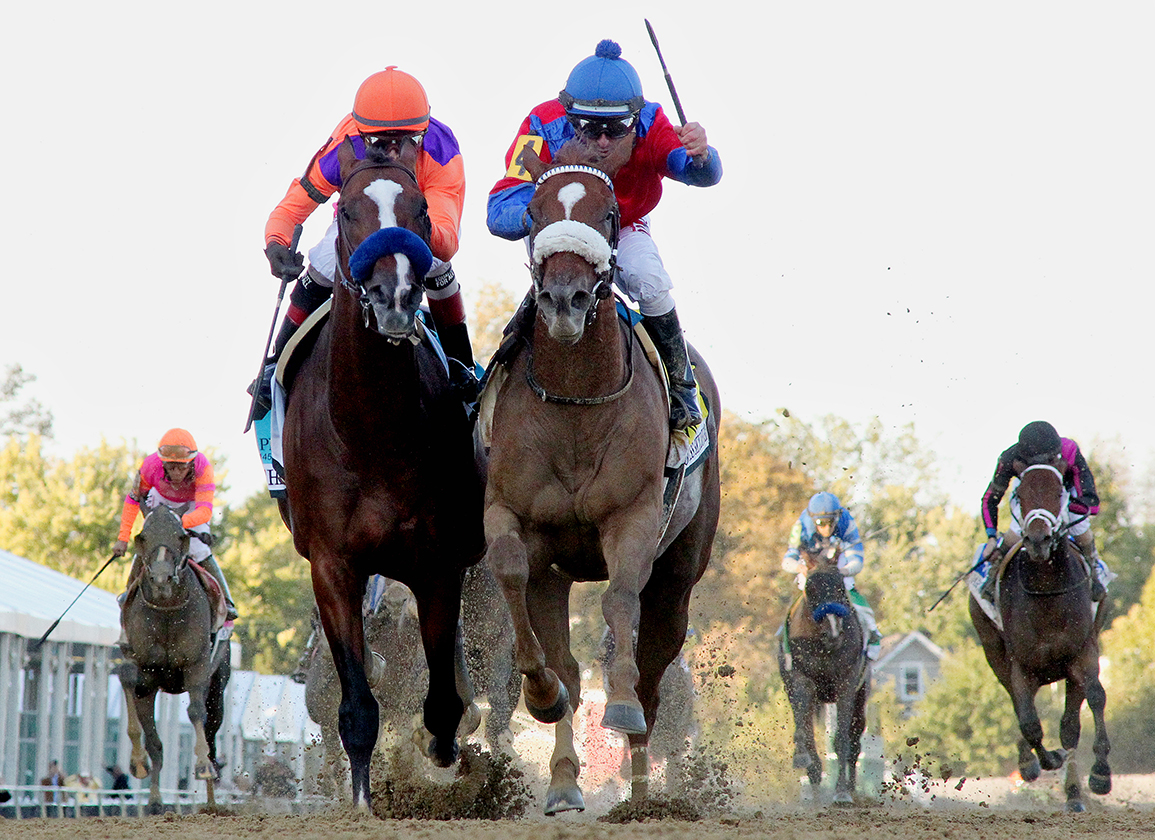 Swiss Skydiver becomes one for the record books in the 2020 GI Preakness S. | Horsephotos

McPeek purchased the Select Sales-consigned yearling for $35,000 for longtime client Peter Callahan. Swiss Skydiver made her debut the following November at Churchill Downs, breaking her maiden there by five and a half lengths.

There was much more to come as the calendar turned to 2020.

“Her three-year-old season was magical,” McPeek said. “For everybody who was dealing with the pandemic, we knew that there were a lot of people that couldn't go to the races and we were traveling with Swiss Skydiver. We went from state to state and it seemed like everywhere we went was a new adventure.”

Swiss Skydiver collected three consecutive graded stakes victories before making her first start against the boys in the GII Blue Grass S., running a more-than-acceptable second to Art Collector (Bernardini). After earning her first Grade I in the Alabama S. and then taking second in the GI Kentucky Oaks, Kenny McPeek had skeptics reeling when she was entered in yet another contest, this one against her toughest competition still, in the GI Preakness. S.

“I never second-guessed running her against the boys at all,” McPeek said when asked of his decision to enter the filly in her ninth start of the year. “Her speed figures looked like she fit against just about anybody.”

Off at 11-1, Swiss Skydiver refused to yield against eventual Horse of the Year Authentic and crossed the wire in front by a neck to win the second-fastest Preakness S. in history and give her trainer his first Preakness victory.

“I think I had maybe 700 text messages on my phone,” McPeek said with a laugh. “Look, when you win everybody texts you and when you lose, nobody does. But you know, she made it all happen. Without her, none of it happens.”

McPeek added that he was thrilled to share the experience with longtime client Peter Callahan.

“Peter is one of the most special people I've ever worked for,” he said. “He really understands the game. His persistence with me is really the reason why we're here. He has let me buy some slow horses too and I couldn't be happier for a guy like him to have her.”

While the stars all aligned for Swiss Skydiver during her Eclipse Award-winning 3-year-old campaign, she came back at four to win the GI Beholder Mile S. in March but then several unfortunate circumstances got in the way of the original plan for her 2021 campaign. However McPeek said he will not let those disruptions get in the way of him celebrating the champion's many accomplishments.

Swiss Skydiver will enter the ring at Fasig-Tipton as a six-time grade stakes-winning champion with earnings of over $2.2 million. 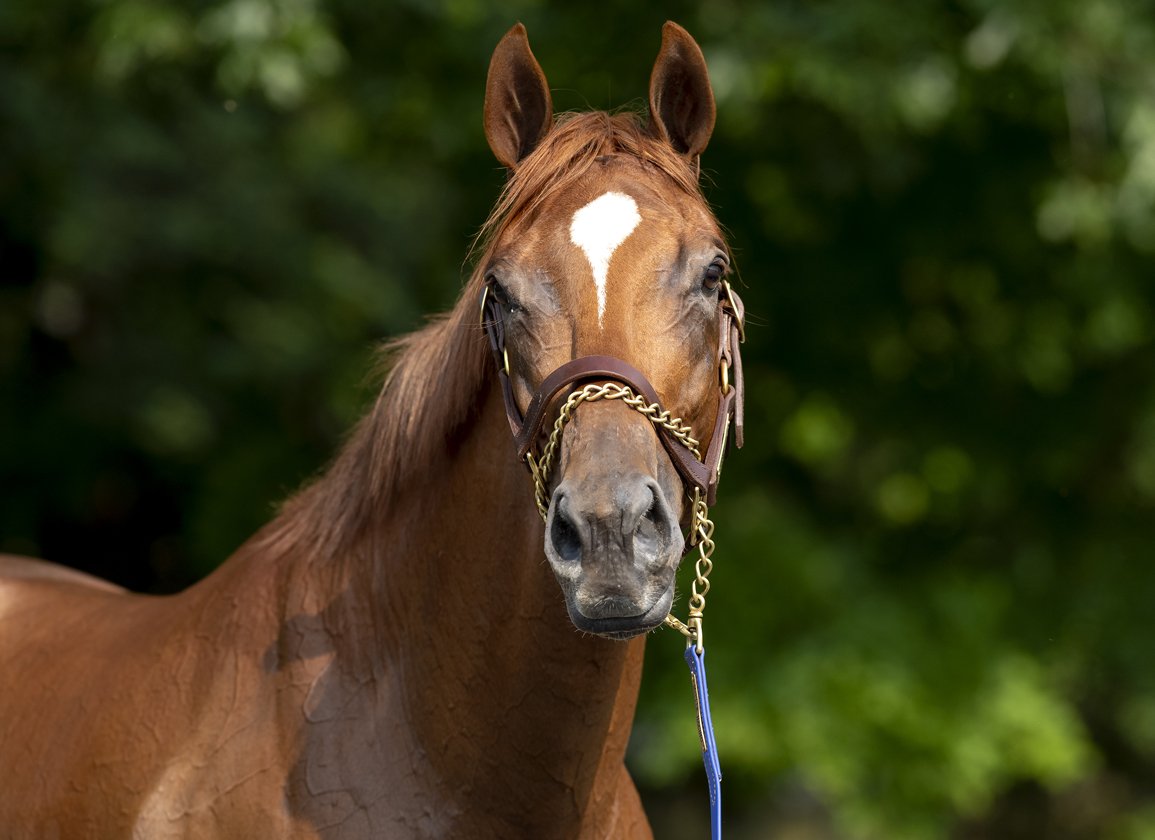 “We're thrilled to have a filly of the quality of Swiss Skydiver entered in the sale,” Fasig-Tipton's Boyd Browning said. “She truly is the complete package-unbelievable race record, demonstrated brilliance on a number of occasions, but also demonstrated the durability and consistency that truly defines a great filly.”

Browning added that he believes Swiss Skydiver offers all the qualities the buyers as Fasig-Tipton will be seeking.

“Breeders today are desiring durability, consistency and toughness,” he said. “She's a throwback. She trained hard, she ran hard, she answered every bell. She was an exceptional racehorse and had that grit and determination that I think she is likely to pass on to her offspring as well.”

For McPeek, watching Swiss Skydiver as she embarks on her broodmare career reminds him of another one of his talented trainees from years ago.

“Take Charge Lady (Dehere) had that kind of talent and ended up being Broodmare of the Year,” he said. “I would wager that Swiss Skydiver will be every bit as good of a broodmare as she was a racehorse because she's extremely intelligent and she's just a kind soul to be around. On the physical [aspect], she's just so big and strong. She's a filly that would be ideal in that you could breed her to a list of stallions.”

For Browning, much of Swiss Skydiver's potential for success as a broodmare is found by looking back on the accomplishments of the only other two Preakness-winning fillies from the last 100 years.

“We all remember Rachel Alexandra-one of the all-time greats of our industry,” he said. “She produced a Grade I winner in a very limited number of foals and also produced a stallion who is having success at the racetrack right now too. The other filly to win the Preakness in the last 100 years is Nellie Morse and she produced a champion in her own right and has become a very influential broodmare.”

Swiss Skydiver will sell as Hip 246 with the Runnymede Farm consignment on Nov. 9 at the Fasig-Tipton November Sale, but for now McPeek is enjoying his final days with his history-making filly as she begins the transition period at Magdelena Farm–the location where she was once saddled for the very first time.

“We've really been blessed to be around a horse like her,” he said. “They're few and far between and you really have to appreciate them when they come into your life. I think we did take advantage of all that and spent time with her. I got a chance to bond with her really well. It's going to be tough, because we love being around her. She's a really special filly.”