Home » Archive » Top News » Space Blues Gets Another for Godolphin, Appleby and Buick

Space Blues Gets Another for Godolphin, Appleby and Buick 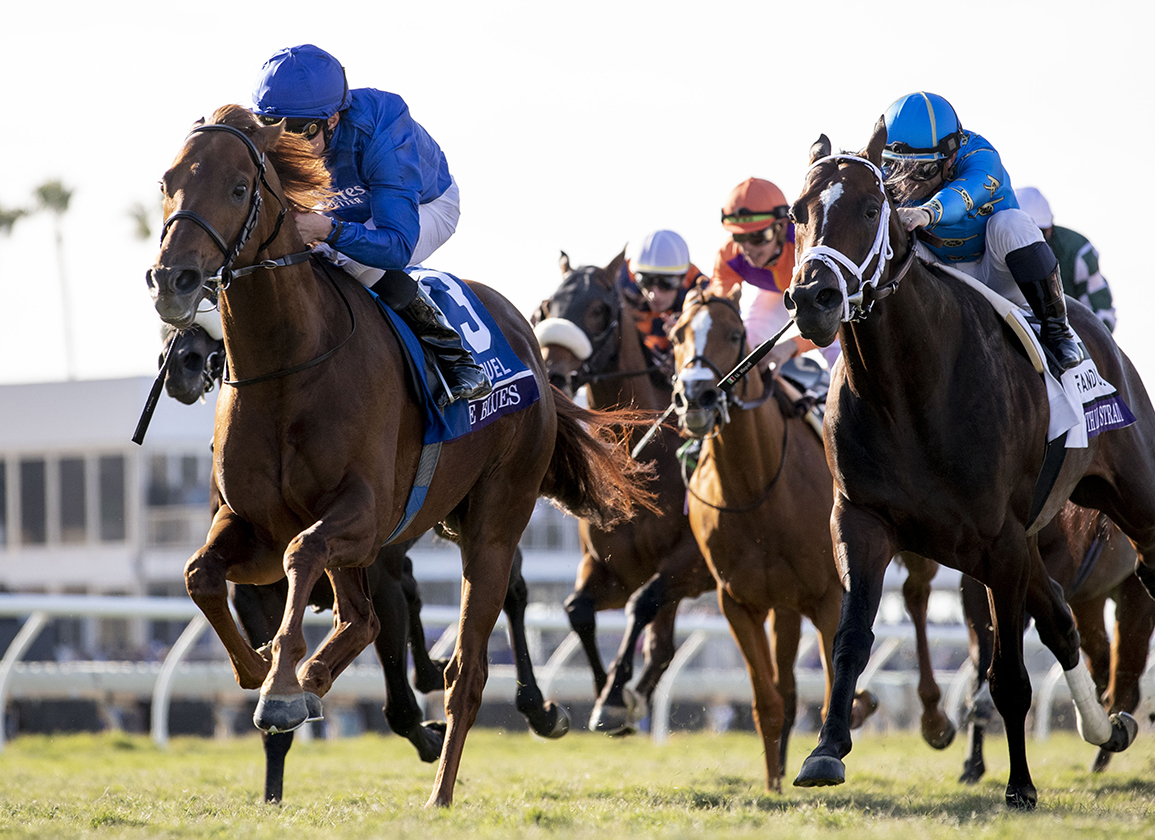 Following a bit of unwelcomed deja vu when Godolphin's rail-drawn Master of the Seas (Ire) (Dubawi {Ire}) was scratched after rearing up in the gate, stablemate Space Blues (Ire) (Dubawi {Ire}) became the shortest-priced winner on what became a pretty quirky day at the Breeders' Cup, coming away late to best pacesetting local Smooth Like Strait (Midnight Lute) in the GI Fanduel Breeders' Cup Mile, presented by the Permanently Disabled Jockeys' Fund. Ivar (Brz) (Agnes Gold {Jpn}), a well-backed fourth in last year's Mile, went a good race to finish a close third.

Smooth Like Strait, the lesser preferred of the two remaining California-based milers at 10-1–Hit the Road (More Than Ready) was scratched Saturday, while Mo Forza (Uncle Mo) was the 3-1 second choice–jumped straight into the bridle for Umberto Rispoli and although he had some early company in the form of the negatively ridden Blowout (GB) (Dansili {GB}), was allowed a fairly soft time of things from the front, negotiating the opening two furlongs in :23.51. Space Blues fell into the perfect spot from third, just to the inside of 2019 Mile runner-up Got Stormy (Get Stormy), and had the leaders in the crosshairs after a half in a moderate :47.38. Given the hurry-up by William Buick five-sixteenths of a mile out, Space Blues took up the chase in earnest, pushed away from the inside with a furlong and a half to travel, had dead aim on Smooth Like Strait at the eighth pole and surged past to register a cozy success. Ivar, worse than midfield and wide into the turn, switched out in upper stretch and was along late to grab third spot. Mo Forza never landed a blow, finishing last of the 13, a field that was covered by just over six lengths in the end.

Space Blues capped his 4-year-old campaign on a three-race winning streak, landing the G1 Prix Maurice de Gheest at Deauville last August, then returned to action with a 3/4-length tally in the STC 1351 Turf Sprint Cup on the Saudi Cup undercard Feb. 20. Never truly in it when only ninth in the G1 Al Quoz Sprint at Meydan Mar. 27, the chestnut hinted at a return to his best form when a half-length fourth in the G2 Lennox S. at Goodwood July 27 ahead of a sparkling 1 1/2-length score in the G2 City of York S. Aug. 21. Space Blues proved that he was in no way ground-dependent when running out a two-length winner of the G1 Prix de la Foret at ParisLongchamp in heavy going Oct. 3, a race that has served as a useful pointer to the Mile.

“I had a good plan in my head how I thought it would work out and I wanted it to work out and it worked out a little bit better than what I hoped,” said winning jockey William Buick, who doubled up on Yibir (GB) (Dubawi {Ire}) in the Turf two races later. “I was a little bit worried if I was going to be too close to a hot pace, but the horse, Blowout, she didn't go on today, and the leader set favorable fractions, so I was right behind him and I was very happy where I was.

He continued, “We had a perfect trip and I knew today was all about getting a trip for this horse, and the way the race panned out it really played to Space Blues' strengths, and I'm delighted that he could show everyone over here what he's all about. He's been a great horse for me personally and for everyone on this team.”

Space Blues was the second of three winners on Breeders' Cup weekend for the outstanding Dubawi, whose lone previous winner on championship weekend came courtesy of Wuheida (GB), ridden by Buick to victory in the 2017 Filly & Mare Turf here at Del Mar.

Space Blues is a half-sister to MGSW Shuruq, who has also left her mark on American racing as the dam of Godolphin's GSW & MGISP Antoniette (Hard Spun) and Javanica (Medaglia d'Oro), runner-up in this track's GIII Jimmy Durante S. last fall. This is also the female family of G1 English 1000 Guineas winner Virginia Waters (Kingmambo).

Miss Lucifer is the dam of the unraced 3-year-old filly Beautiful Future (Ire), a daughter of Dubawi's son Night of Thunder (Ire), and a yearling filly by Dark Angel (Ire).