Spa Notebook: Jerkens Runners Gearing Up for Next Appearances 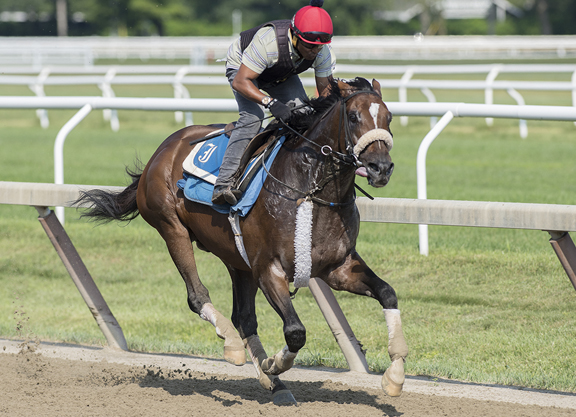 A pair of graded winners from the barn of trainer Jimmy Jerkens have taken to the Oklahoma training track over the past few days as they ready for a return to stakes company in the final two weeks of the meet at Saratoga.

A veteran of just nine career runs, the $485,000 Keeneland September purchase defeated Catholic Boy (More Than Ready) by an authoritative 4 1/2 lengths in the Suburban, but he weakened to finish fourth to ‘TDN Rising Star’ McKinzie (Street Sense) after setting a strong pace in the GI Whitney S. when last spotted Aug. 3.

“I didn’t agree with the tactics used, but what are you going to do? He took a shot and it didn’t work out, but we’ll see,” Jerkens said.

The conditioner also confirmed that Green Light Go (Hard Spun), last-out winner of the Aug. 10 GII Saratoga Special S., would make his next start in the GI Runhappy Hopeful S. Sept. 2. Jerkens had contemplated waiting for the GI Champagne S. at Belmont Oct. 5.

“We’re probably going to run in it,” Jerkens said. “We might as well. He’s doing good. It keeps him on a schedule. I think two months is a long time to sit on one and then run a mile. It doesn’t seem to make much sense. The proof will be in the pudding. We’ll see how he does.”

Green Light Go returned to the worktab for the first time since winning the Special this past Tuesday, working an easy half-mile in :50.48 at Oklahoma.