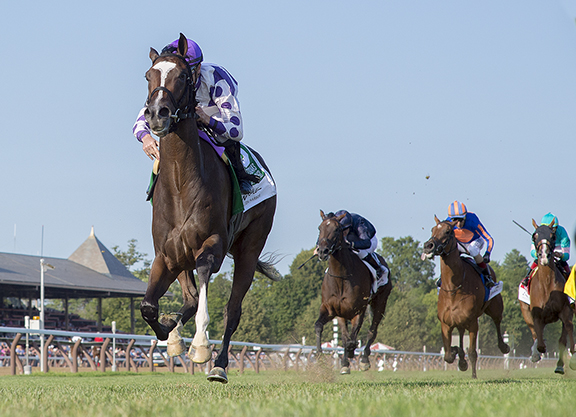 “We'll probably run at Belmont,” trainer Rusty Arnold told the NYRA notes team. “If she's good, she'll probably run [in the Jockey Club Oaks], now that we have thought things over, as long as we don't have any kind of issues.”

Arnold believes the 11-furlong trip is within his filly's capabilities.

“With the way she has run, I don't think [1 3/8 miles] will be a problem,” Arnold continued. “Let's face it, I don't think you know until you do it, and I don't think anybody knows, but it looks like after the way she ran we wouldn't have an issue trying it, especially if she can get another easy lead. The fact the [Queen Elizabeth is a Grade I] would factor more into our decision if she wasn't already a Grade I winner, but we're going to take her where she fits best, and the grading probably won't matter.”

G M B Racing's Tom's d'Etat (Curlin) has emerged none the worse for wear from his stylish victory in Friday's Alydar S. at Saratoga and could make his next appearance in the GI Woodward S. over the same course and distance Aug. 31, trainer Al Stall, Jr. said.

“He certainly did it the right way [Friday], so we'll take a good long look at him this week and see how he comes out of the race,” Stall said. “The next logical spot would be the Woodward, but we'll see. It takes us about a week or so to evaluate how he comes out of a race. We'll take our time and see what's what.”