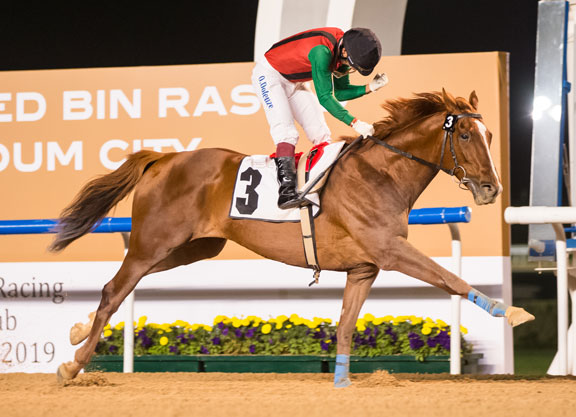 When South Korean star Dolkong (Afleet Alex) enters the outside stall for Saturday's $12-million G1 Dubai World Cup at Meydan Racecourse, he will carry the hopes not only of an entire nation's fan base, but also those of his Nokesville, Virginia-based breeder Ellen B. Kill Kelley. Suffice to say that the race can't come soon enough.

“It's unbelievable is what it is–absolutely unbelievable!” Kill Kelley said Thursday when reached by phone. “We've had some pretty wild dreams, but this has not been one of them.”

Kill Kelley is the owner and operator with her husband John of See Jay Farm in Nokesville, a town with fewer than 1,500 residents located about 100 miles from and nearly due north of the state capital of Richmond. The couple purchased Dolkong's granddam Bayou Bird (Stately Don) for $47,000 in foal to West by West at Keeneland November in 1997.

“We were looking for a little black-type, and she had a little black-type as a 2-year-old,” Kill Kelley explained. “She had a bump on her knee so I guess that's why she didn't go on. But she was an attractive, young mare and she was in our ballpark as far as the price was concerned.”

After foaling the colt that would become Tarek, runner-up to D'Wildcat in the 2001 GIII Swale S., Bayou Bird produced colts in 2001 and 2002 and, after aborting to Broken Vow in 2003, produced Dolkong's dam Swampoodle to the same sire's cover the following season. The dark bay didn't make the Kill Kelleys famous by any stretch, winning twice from 25 starts, but has become the 'star' of the couple's small broodmare band.

“She's a very big mare. She has a lot of bone and has a lot of substance,” Kill Kelley said. “She is a very plain mare, she has no chrome, but she is a very sweet mare, very easy to get along with. The easy mares are easy to love.”

After doing their homework, the Kill Kelleys landed on Afleet Alex for Swampoodle's cover in 2013.

Swampoodle foaled a chestnut colt on Mar. 13, 2014, and he was an uncomplicated sort, Kill Kelley recalled.

“He was a very easy-going horse,” she said. “We were just talking about this yesterday with a couple of folks who helped us that year with our yearlings. We remember one or two issues with some of the other yearlings, but he really had no issues. He did whatever we asked him to do, he was just like the quiet guy in the back of the class that did everything you asked him to do.”

Through agent James M. Herbener, the Afleet Alex colt was consigned to the 2015 Fasig-Tipton October sale, where he was purchased for $52,000 by Wayne Detmar, who was clearly hoping lightning would strike twice with the stallion.

“Wayne Detmar was partner in Afleet Alex's son [GI Breeders' Cup Juvenile winner] Texas Red,” Kill Kelley explained. “He was a very loquacious guy, he came back to the barn after the sale to talk to us, he wanted his picture taken with the horse and introduced himself as the part-owner of Texas Red.”

The Afleet Alex colt was prepared by Mayberry Farm for the the 2016 OBS April Sale and, somewhat to Kill Kelley's surprise, was hammered down to Korean interests for $35,000.

“That to me was not a good sign, but he has clearly thrived over there. He's been given every chance to succeed and he's done extremely well for them–obviously!”

Dolkong is not the first prominent Korean runner bred by Kill Kelley. She is also responsible for having bred Cowboy Son (Cowboy Cal), Korea's champion imported 3-year-old colt in 2014.

Swampoodle, who is one of five mares boarded at Windmill Farm in Versailles, Kentucky, was covered last season by 'TDN Rising Star' Unified (Candy Ride {Arg}) and “is due any minute,” according to Kill Kelley.

Come 12:40 p.m. EDT Saturday afternoon, you can rest assured that Ellen Kill Kelley will be one of the more vocal cheerleaders should Dolkong make a run at the leaders in the world's richest horserace.

“You bet we will. We will be glued to the TV. We have told more people than want to hear about it,” she said with a laugh. “I don't know if any of them will be watching or not, but we have certainly tried to spread the word here in Nokesville.”