Songbird Won’t Be Pointed Toward Derby 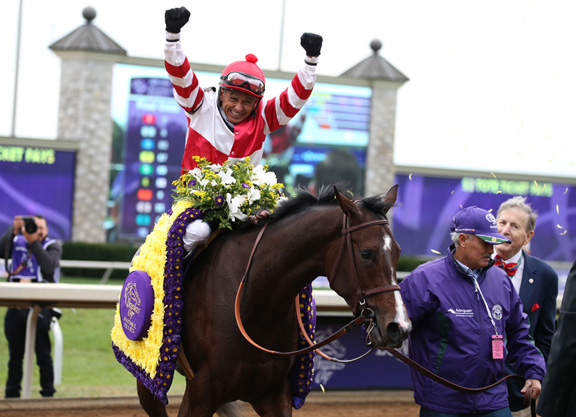 After finishing off her 2-year-old campaign with a brilliant victory in the GI Breeders’ Cup Juvenile Fillies, a race that went more than one second faster than the Juvenile, ‘TDN Rising Star’ Songbird (Medaglia d’Oro) appears to be the most talented 2-year-old in training–of either sex. But her owner, Rick Porter, says he has no plans to race her in next year’s GI Kentucky Derby.

“If they hadn’t changed the point system [to exclude races restricted to fillies] I might have considered it,” Porter said. “[Trainer] Jerry [Hollendorfer] doesn’t like to run the girls against the guys and if I pushed for this I think that would upset Jerry. With him and his assistants I think we have a great team. I started thinking about it and decided the race we would like to win is the [GI] Kentucky Oaks and then go to the [GI] Mother Goose, the [GI] Coaching Club [American Oaks] and the [GI] Alabama. If we could win all those, that’s not a bad summer. I don’t see how we improve her value by winning the Kentucky Derby. With her, the only advantage to winning the Kentucky Derby would be to say ‘I won the Kentucky Derby.'”

Porter ran filly Eight Belles (Unbridled’s Song) in the 2008 Kentucky Derby, which resulted in a tragedy. After finishing second, she broke down and had to be euthanized. Porter said afterward the Eight Belles incident wouldn’t scare him away from running a filly against the boys and he backed that up when sending Havre de Grace (Saint Liam) to the 2011 GI Woodward S.. She won that race and later that same year finished fourth in the GI Breeders’ Cup Classic. The Woodward win was a key factor in her being named Horse of the Year.

“Maybe when Songbird is a little older we may take a shot against the boys in a big Grade I,” Porter said.

Porter said that he and Hollendorfer have yet to map out a schedule to get the filly to the Kentucky Oaks, but said the focus throughout the year will be to run in Grade I races. He added that after the Breeders’ Cup his filly was sent to Dr. Larry Bramlage for routine tests.

“We sent her to Dr. Bramlage and he completely checked her out,” Porter said. “He did a bone scan and everything was clean.”