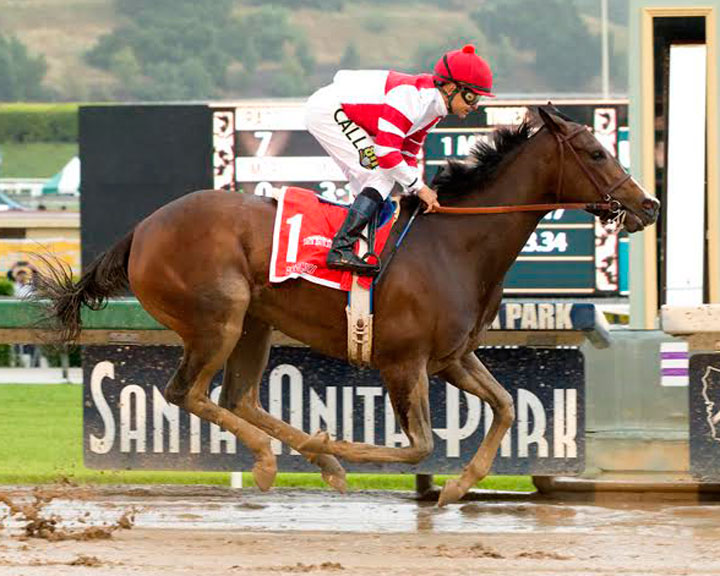 As expected, a sloppy track and the one-hole were no problem for undefeated champion Songbird, who sailed home to yet another daylight victory while never being asked by Mike Smith. Breaking sharply from her rail draw, the chalk was very briefly headed by an overeager Forever Darling (Congrats), but the Fox Hill runner swiftly resumed command on the fence as that rival went wide into the first turn. The “TDN Rising Star” never looked back after that, easily skipping over the muddy surface as she clocked opening splits of :23.34 and :47.17. With Smith seemingly frozen in place as Songbird showed the way into the lane, the bay gave the crowds more of the same, rolling home to another seemingly effortless victory. Mokat was best of the rest in second and She’s a Warrior completed the trifecta with Forever Darling holding for fourth.

“I had a little bit of anticipation with the off track, wondering if she could handle it or not,” commented Hall of Fame conditioner Jerry Hollendorfer. “A couple of the horses earlier had stickers on and won, but we didn’t put any on. I don’t think any of the others guys in this race did, either. We didn’t want her slipping, but she didn’t slip, so that’s good.”

“She’s just incredible,” enthused Smith. “I feel so blessed and I keep pinching myself, having to remind myself that I’m the one that gets to keep the weight on her. That’s really all I do. She’s so professional, so good at everything. She was spinning her wheels a little bit going into the first turn but once we got to the backside, she found her rhythm and she got comfortable and it was all her again.”

Tabbed a “TDN Rising Star” off an ultra-impressive debut win sprinting at Del Mar last July, Songbird rattled off a trio of decisive victories in the GI Del Mar Debutante Sept. 5, GI Chandelier S. Sept. 26 and the GI Breeders’ Cup Juvenile Fillies at Keeneland Oct. 31 to lock down the Eclipse award for her division. She picked up right where she left off this season with dominating scores over Land Over Sea (Bellamy Road) in the GII Las Virgenes S. Feb. 6, where She’s a Warrior finished third, and the GIII Santa Ysabel S. Mar. 5, in which Mokat completed the trifecta. Songbird was further flattered when Land Over Sea, who also hit the board in the Del Mar Debutante and Chandelier, went on to win the GII Fair Grounds Oaks by 4 1/2 lengths Mar. 26.

Songbird’s dam Ivanavinalot, winner of the 2003 GII Bonnie Miss S., produced a filly by Ghostzapper last term and was bred back to Tapizar.