Son of Jack Milton Pulls Off Another Upset in Futurity 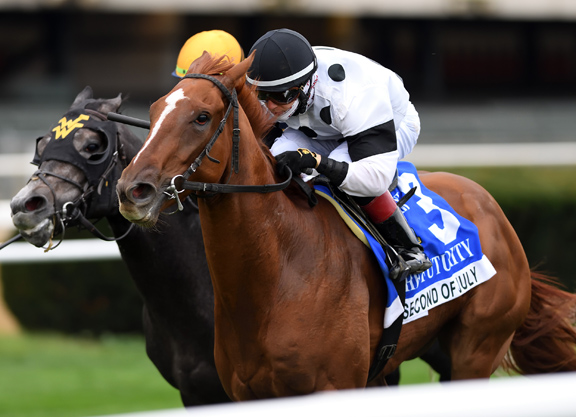 Bryan Hilliard's homebred Second of July (Jack Milton), who was a 68-1 outsider when he captured his debut at Belmont Park last month, came back to score another upset victory in the GIII Futurity S. in Elmont Sunday. The win earned the gelding an automatic berth in the GII Breeders' Cup Juvenile Turf Sprint at Keeneland Nov. 6.

“I knew he was very fit and sharp and doing good, so I knew he would run his race, but I just wasn't sure if it was going to be good enough, but it turned out to be,” said winning trainer Phil Gleaves.

Sent off at 15-1, Second of July was second to last through an opening quarter in :22.10 and was mired in traffic in a compact field after a half in :45.45. He found clear sailing in midstretch and strode to the lead before holding off the late-rushing After Five (The Factor) to win by a half-length. 'TDN Rising Star' Momos (Distorted Humor) held third after setting the pace.

“He broke well for me, but I just could not get any early foot on him,” said winning rider Dylan Davis. “Once we got to the turn, he wanted to get a little aggressive and I allowed him to move up a little bit. From then on, I was just trying to find a clear spot to get going on him and once I did, he excelled.”

After Five was last at the top of the lane and behind a wall of horses. Irad Ortiz tipped the colt to the center of the course and he closed furiously late to just miss.

“The horse ran a great race,” trainer Wesley Ward said of the runner-up. “It's just unfortunate he had traffic trouble and that's what happens in racing. He lost, but he's a very nice horse.”

Second of July was always up close in his six-furlong debut, graduating by 3/4 lengths against a well-connected group of runners at Belmont Sept. 20.

Gleaves said he expects Second of July, a reference to Hilliard's son Reed's birthday, will head to Keeneland for championship weekend.

“All being well and if the horse is OK, we will head to the Breeders' Cup,” Gleaves confirmed.

The unraced Wichita, purchased as a 4-year-old for $32,000 at the 2015 OBS January sale, produced a colt by Temple City this year and was bred back to Jack Milton. Second of July's third dam, Northern Dynasty, produced stakes winner and graded placed Dynasty (Time for a Change), who is dam of the graded winner Harissa (Afleet Alex).

Second of July is the second stakes winner, and first graded winner, for 2015 GI Maker's 46 Mile S. winner Jack Milton. The stallion is also represented by 'TDN Rising Star' Tobys Heart, who is now two-for-two after winning the Bolton's Landing S. at Saratoga this past summer.