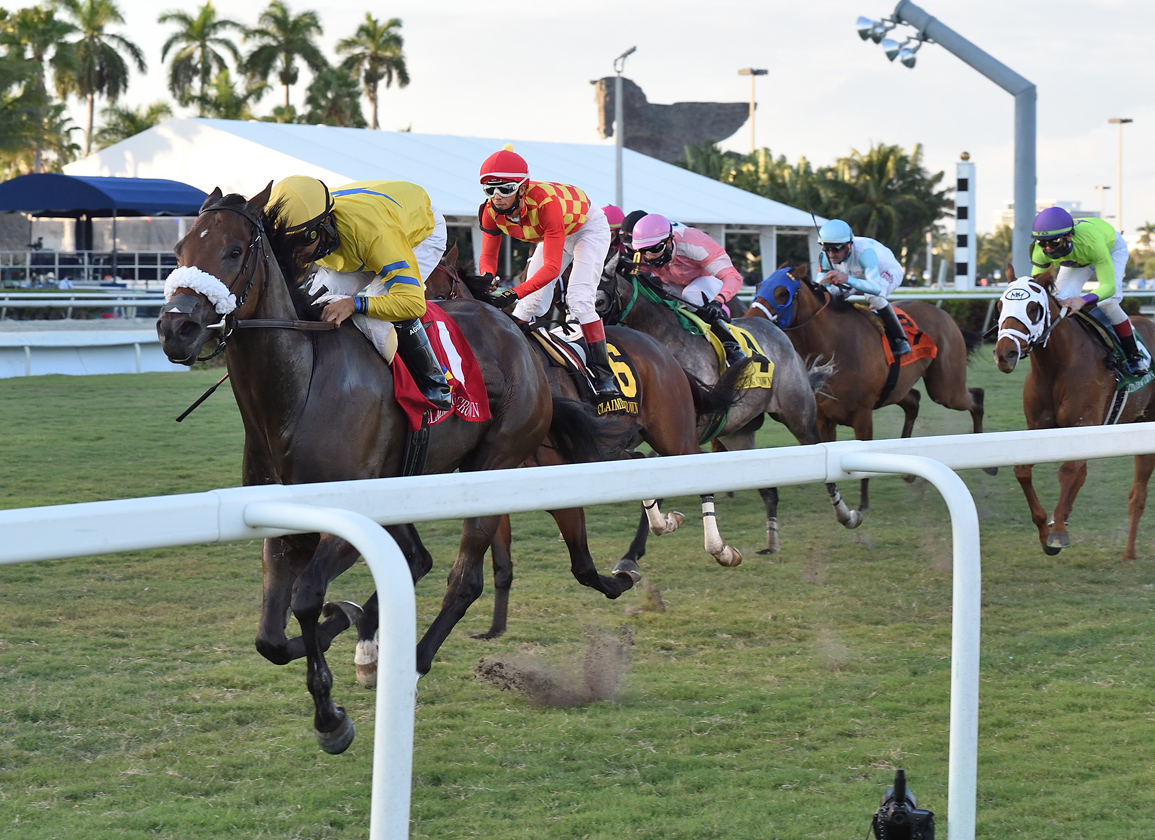 Short-money favorites getting class relief while dropping out of graded stakes company set the tone in the nine-race Claiming Crown (CC) series Saturday at Gulfstream Park.

Luis Saez won six races overall (five in CC stakes), and trainer Mike Maker was one of nine separate trainers to hit the winner's circle in the CC races, posting his 18th career CC win to lead the series that began back in 1999 as a blue-collar version of the Breeders' Cup.

Conducted under starter-allowance conditions pegged to previous-race claiming prices, the CC is designed to honor and reward horses who compete in the types of races that form the backbone of day-to-day American racing. The annual event is a partnership between the National Horsemen's Benevolent and Protective Association (NHBPA) and the Thoroughbred Owners and Breeders Association (TOBA), and Gulfstream has evolved into the host track over the past nine years while slotting the series as the opening-weekend focal point of its championship winter meet.

As usual, many of Saturday's CC winners could have been had at the claim box earlier in their careers for relatively low asking prices prior to rounding into higher-profile overachievers.

Jesus' Team (Tapiture), the grind-it-out 2-5 winner of the featured $150,000 CC Jewel S. over nine furlongs, is the prime example. The 3-year-old colt broke his maiden for $32,000 at Gulfstream last March and was then dangled for a $25,000 tag with no takers when airing at the NWL2 level. He consistently punched above his weight during 2020 while earning top-four placings in Grade I and II stakes, including a 40-1 third in GI Preakness S. and second at 62-1 in the GI Breeders' Cup Dirt Mile.

Saez kept Jesus' Team parked at the rail behind legitimate splits, tipping out at the head of the lane for a length-of-stretch reeling in of the pacemaker and a three-quarters of a length score.

Jakarta (Bustin Stones), the 4-5 victress of the $90,000 CC Distaff Dash S. over five furlongs on the turf, is another admirable rise-through-the-ranks tale. She toiled at the $16,0000 claiming ranks at Penn National as recently as 15 months ago, then improved enough to take a crack at tougher graded company in New York, Kentucky, and Canada during most of 2020.

Jakarta customarily heads straight to the front (on top at first call in 13 of 17 lifetime races), but she came away tardily on Saturday before rallying behind a 23-1 sacrificial speedster to open up late and win by 2 1/4 lengths for owner Three Diamonds Farm, trainer Maker, and jockey Saez.

While the above winners all represented bygone chances on the part of rivals who missed out on claims at lower asking prices, several CC winners on Saturday were the products of bigger-ticket purchases after initially racing for more modest claiming prices.

Fiya (Friesan Fire) began his career in November 2019 as a $25,000 maiden-claimer in Maryland but was purchased for $400,000 at the Wanamaker's July 2020 online sale after a sizzling 98-Beyer win that was .25 seconds off the Laurel turf course record. He has since won three straight turf sprints, including an allowance, a division of the Maryland Million stakes, and now the $90,000 CC Canterbury S. at 1-2 odds for owner Robert Masiello and trainer Tom Albertrani. Saez was up for the 1 1/2-length wire job, which ran Fiya's record to five-for-five in 2020.

The win by Queens Embrace (Real Solution) in the $95,000 CC Tiara S. also had an “immediate return on investment” ring to it. The 3-year-old filly broke her maiden for a $16,000 tag Jan. 1 at Tampa Bay Downs. Four additional wins and eight months later, she was claimed for $80,000 at Belmont Park by the partnership of Spedale Family Racing LLC and Flying P Stable. It appears as if the CC was the optimal target for trainer Danny Gargan, and Queens Embrace delivered as the 23-10 second choice with a four-wide late kick under Saez that put her 2 3/4 lengths clear at the wire.

Earlier this year, Avant Garde (Tonalist) required five starts to break his maiden for a tag, and he was claimed along the way for $10,000 by trainer Jesus Lander on behalf of owner Gelfenstein Farm. That change of barns ignited a five-of six win streak, during which the gelding's only loss was a fourth in the GIII Oklahoma Derby. Back to the track where he now owns a five-for-six record, Avant Garde shot up the rail in deep stretch on Saturday to earn a half-length win at 6-1 odds under Leonel Reyes in the $85,000 CC Rapid Transit S. over seven furlongs.

Descente (Bodemeister) was the only CC stakes winner cut from the mold of being claimed repeatedly while earning her oats with gaudy, open-length victories at the lower end of the totem pole. Since Dec. 4, 2019, the 4-year-old filly has been claimed no fewer than six times, including for $6,250 in her most recent start at Gulfstream Park West 48 days ago.

Her 4 1/2-length win at 7-2 odds in the $80,000 CC Glass Slipper over a mile for Walder Racing and trainer Peter Walder marked the second consecutive victory in that stakes for Walder, who has now won five CC races during the 22-year run of the series. Miguel Vasquez rode.

High Noon Rider (Distorted Humor) was the bomb-thrower of the CC bunch. He orchestrated a 55-1, half-length upset of the $95,000 CC Emerald S. for lifetime win number 15. GenStar Thoroughbreds owns, Saffie Joseph, Jr. trains, and Edgard Zayas rode. This 9-year-old gelding had never gone off at odds that high in 55 career tries (34-1 previous high), and had recently been sent postward favored or close to it while competing in the starter-allowance ranks.

The nose win by Frost or Frippery (Lewis Michael) in the finale on the card, the $75,000 CC Iron Horse S., was the tightest finish on the day, barely earning jockey Saez his six-pack of victories. The 3-1 shot owned by Steve Landers Racing LLC and trained by Brad Cox registered lifetime score number 21 and win number eight during this calendar year, which puts Frost or Frippery in a three-way tie for most victories in North America in 2020.

“No question, this event has evolved,” said Dan Metzger, President of the Thoroughbred Owners and Breeders Association (TOBA). “I thought Saturday's fields, from top to bottom, were some of the best we ever had. The support of the fans who set a record for total wagering is a testament to the competitive and quality fields.”