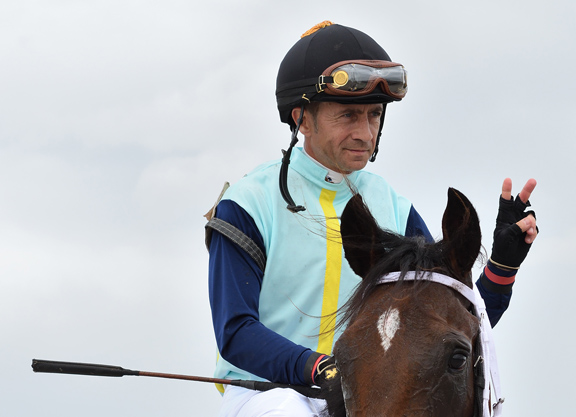 At 46, Luca Panici is far too deep into his career for anyone to talk sensibly of breakthroughs. But if it is unusual to find the second favorite for a Classic ridden by a jockey who has otherwise partnered a single graded stakes winner, then let nobody be deceived. Luca Panici was born and raised for days like Saturday, and his horsemanship and character are absolutely commensurate with the opportunity awaiting him on Sole Volante (Karakontie {Jpn}) in the GI Belmont S.

The one pity, of course, is that this belated showcase will be so bleakly lacking the atmosphere that usually prevails on the Triple Crown trail. Yet the real hollowness, the real absence, relates not to the deserted grandstands, but to the man who entwined both nature and nurture in the evolution of Panici's talent: his father Vittorio, who belonged to a golden generation of jockeys in Italy, and died only last year.

“With no fans, for sure, it's not the same,” Panici admits. “Belmont is a big racetrack where they can seat 60,000 or 70,000 people. But we just have to be thankful to have the opportunity to run these races. In Florida, we never stopped racing. They've done a great job, and we have to be grateful to all the people involved. So I think we should see everything as a plus, and enjoy it.

“But yes, my father, he was really proud of my choice to come and make a career here. He used to visit every year, and watch the races. And I'm pretty sure that he will still be proud from Heaven.”

Vittorio's riding career extended for 42 years, and associated him with the distinguished stables of Federico Regoli and Antonio Pandolfi. His own father had been a jockey, likewise his three brothers. Unsurprising, then, that Luca and his brother Marco also entered the family trade.

“I was almost born on the racetrack,” says Panici. “All the family were involved: they were all jockeys or trainers or assistant trainers. I lived two steps from the track. And for everybody in my area, the dream was to become a soccer player if you had the right body; or to go to the racetrack if you were too small for that.

“I'm lucky to have had so many family members involved. They taught me a lot, growing up. My father was a very intelligent rider. He could say before the race all the tactics of the other jockeys. So, as a beginner, I would try to follow him and think about the moves he made. He wasn't a big talker, but his little bits of advice you'd always remember for next time.”

Panici owes his big chance to another transatlantic migrant in trainer Patrick Biancone, who found Sole Volante for just $20,000 at OBS last April. Panici first rode the gelding in the colors of Biancone's daughter Andie, though his silks on Saturday will reflect the investment meanwhile of Dean and Patti Reeves.

In his time, Biancone has tutored four of the outstanding modern French riders in Dominique Boeuf, Eric Legrix, Gerald Mosse and Olivier Peslier; and, after reaching the United States, he similarly mentored Julien Leparoux. As such, his faith in the veteran Panici obviously means a great deal.

“Mr. Biancone has won the Prix de l'Arc de Triomphe twice, he's a first-class trainer who compares with the best in the world: [John] Gosden, [Aidan] O'Brien, even [the late Sir Henry] Cecil,” he says. “These top trainers, they can see something in the horse, just galloping, that others can't see. To pick a horse out like this one, for that kind of money: this is an artist. And when you are riding for this kind of trainer, it's much easier. They know right away the ability these babies have, and how they will develop. From the first day, Mr. Biancone was always confident about this horse.

“These trainers, they have the full package. They choose the right horse, they choose the right jockey. Mr. Biancone has discovered a lot of good jockeys. So to be chosen by a guy like him is great: it's exciting, it improves you. He started to put me up on horses a couple of years ago. He gave me a couple of chances, I got lucky, things went well. Here it's not like in Europe, where you have contracts: here if you're not winning, they can change the trainer or the jockey. But we started on the right foot together, we kept winning. And I like his work, in the mornings, especially with the babies. He has a lot of respect for the horse.”

Panici has ridden Sole Volante with corresponding aplomb, pouncing from the rear in the GIII Sam F. Davis S. and again last week in the allowance race chosen by Biancone as a left-field prep for Saturday.

Certainly his mount could only gain confidence from the way Panici delivered him there, sheltering him from a hot pace so that he could scythe them down as they tired in the stretch. It was a lovely, restrained piece of riding.

“It worked out perfect for us,” Panici says. “A fast track, a fast pace. It was genius in Mr. Biancone, to come back in a race like that. And I do enjoy the way this horse races. In America, a lot of horses go fast in the beginning. With him, you have to sit and wait but then the turn of foot is very strong, very fast. Sometimes you have to be lucky coming from behind, if the track is fast, because you don't have that long stretch like in Europe. But when you ask this horse, he gives everything.”

But if these tactics are tailored to Sole Volante, perhaps they also show how Panici has adapted his European education to the American environment. Frankie Dettori, similarly, has cultivated a style that transcends both cultures from a parallel background: his father Gianfranco rode for years against Vittorio Panici.

“But Frankie is older!” Panici stresses with a laugh. “I am the younger generation! He was born in 1970, and I'm 1974. He is a part of my brother's year. When we played soccer, and he was 11 or 12, I was really a kid. But Frankie is more than the best jockey. He's the best person, and everything he has got in his life he deserved.

“But yes, if his father didn't win, my father won. When I started riding, in the '90s, the turf in Italy was one of the best in Europe. So I gained a lot of experience, and could pick up things from all the older trainers and jockeys. It was a good journey. Because we also had jockeys like Willie Carson, Lester Piggott, Pat Eddery coming to ride the big races in Milan. It was spectacular. Wally Swinburn, Cash Asmussen, Steve Cauthen. A generation of genius jockeys. There was no riding school at the time, but race-riding you could learn lessons all the time.”

Panici first started coming to Florida in the 1990s, initially for a few weeks at a time. His brother Marco had done a stint with Luca Cumani in Newmarket, and that opened a connection to Cumani's former assistant Christophe Clement.

“I always loved the American racing,” Panici says. “And then in the early 2000s the economy was pretty bad in Italy: they were cutting purses, closing tracks. So I made that big decision. It took time. If you don't have the right connections, it takes time to break the ice. I had to learn to be more physical; how to prepare my body. In Europe you travel more and ride less. Here you ride six days a week, and a lot of races; and you're working hard in the mornings too. So you need to develop your body, to be more athletic.”

No less than his rider, Sole Volante has proved adaptable between a grass education and a dirt graduation.

“Even before he had run, he showed ability breezing on both surfaces,” says Panici. “When he won first time out on the grass, it was just a regular race, but he showed that ability to pass horses. But the best thing was that he has always had a tremendous mind. He's very quiet, you can train him how you want, and you can put him wherever you want in a race.”

Panici has only recently returned from a third fracture in six months, having broken a couple of ribs at Gulfstream in late April after earlier foot and collarbone injuries. Having assumed himself to have only suffered bruising, the X-ray was an unpleasant surprise.

“That hurt more than a broken bone, thinking that you might miss a horse like this,” he says. “But that's how a jockey's life can be. You might never touch the ground for a few years and then something can happen two or three times in a few months. The important thing, in this job, is always to stay positive. I have to thank the owners, and Mr. Biancone. They told me this horse was always waiting for me, and that's a big motivation to have something like this to come back to. And so my target was to make sure I came back 100%, and luckily I'm fine now.”

In a normal year, of course, that accident would have kept him out of the GI Kentucky Derby itself. As it is, the Derby still beckons at the end of the summer. The inversion of the Belmont, now the first and shortest of the Classics, might not suit Sole Volante ideally with a relatively small field running around a single turn. But Panici believes the horse to be indifferent to distance, given an adequate tempo.

Certainly it would be nice to think that whatever momentum he can generate in the stretch, horse and rider can keep moving forward–potentially to more Grade I prizes later in the year, with the kind of buzz and crowds merited by this fresh chapter in a proud family saga.

For while Panici speaks with all the humility of one long accustomed to the ups and downs of his calling, by the same token he is seasoned enough to ascend calmly to this higher altitude. Florida horsemen attest to his immaculate bearing, and diligence in the mornings. (Among them, his compatriot Dr. Paolo Romanelli of Ital-Cal Horse Management, a great-nephew of Vittorio Panici's employer Federico Regoli). And the fidelity of Biancone, in this ruthless business, speaks volumes of Panici's eligibility for this belated opportunity.

Every inborn instinct should help him to seize it.

“It is a good feeling, to be part of this show,” Panici says. “These Triple Crown races are the most important races in America and to be part of that, on this horse with a nice story, is very exciting. I'm proud of all the people around me that have helped me to ride this horse.