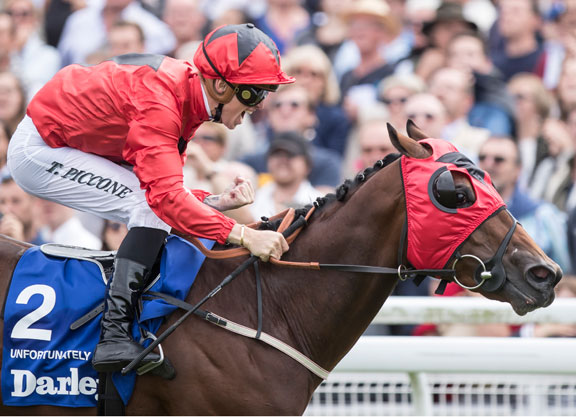 With some judges questioning the merit of his surprise win in the G2 Prix Robert Papin over 5 1/2 furlongs at Maisons-Laffitte July 23, Unfortunately put that beyond doubt here by leading home Havana Grey and a Karl Burke one-two in this feature event. Having opened his account in authoritative fashion at Hamilton May 19, the bay had been second to Ardenode (Ire) (Hellvelyn {GB}) in the Listed Prix la Fleche at Maisons-Laffitte June 10 before finishing in the same position behind the subsequent G2 Superlative S. fourth Zaman (GB) (Dutch Art {GB}) and ahead of the eventual Listed Prix Six Perfections winner Izzy Bizu (Ire) (Kodiac {GB}) in Pontefract’s Spindrifter Conditions S. over this trip July 3.

In the Robert Papin, he had rolled around when taking command which appeared to cost High Dream Milena (Fr) (Dabirsim {Fr}) at least a place and connections had only just learnt that a subsequent appeal against the winner had been unsuccessful. Despite that official confirmation, there were many who felt that Unfortunately had enjoyed more than a share of luck there and this better race would expose any vulnerabilities. Held up in rear of the tightly-packed field sporting first-time red blinkers as Havana Grey cut out the running, he was delivered alongside Different League as the eventual runner-up’s jockey P J McDonald kicked on again having given his mount a breather. Staying on the stronger of the trio, Unfortunately gained the lead with a furlong remaining and asserted under Tony Piccone for a clear-cut success.

Burke was savouring a golden moment afterwards. “This is like a dream come true and one of the best days of my career,” he said. “We won the Jean Romanet two years ago on this day, so it’s lucky. In their early works in the spring, Havana Grey was the quickest of the two but Unfortunately was always catching up at the end and I thought he’d stay further. Havana Grey is a very nice horse in his own right and his jockey said that maybe he should have quickened a little bit earlier as the other one stays better. They are both very good horses and I’d imagine they are not just two-year-olds and there is room for improvement. They should get stronger with time and the obvious target for Unfortunately is the [G1] Middle Park [S. at Newmarket Sept. 30]. We’ll have to think what we do with Havana Grey, as I think he’s just a five-furlong horse. He doesn’t have an entry in the [G1] Abbaye and it wouldn’t be fair on him to go up against the older horses, so we’ll see.” Didier Guillemin, trainer of Zonza (Fr) (Alex the Winner) who also finished on the premises, is looking to step up in trip now. “She ran very well, but obviously now six is too short,” he said. “She is entered in the [G1 Prix] Marcel Boussac [at Chantilly Oct. 1] and that is where we’ll go next.”

Early evidence is that Tally-Ho Stud’s Society Rock could have made into a significant sire had he survived, with several useful juveniles flying the flag. The winner’s half-sister was the G2 Temple S. and G3 Flying Five winner Look Busy, while the dam hails from the family of the G3 King George S. and G3 Cornwallis S.-winning sire Singing Steven (GB). She also has a yearling filly by Sir Prancealot (Ire) and a filly foal by Morpheus (GB).