Home » Archive » Shared News » So… Who's Horse of the Year? Baffert & Sadler

So… Who's Horse of the Year? Baffert & Sadler 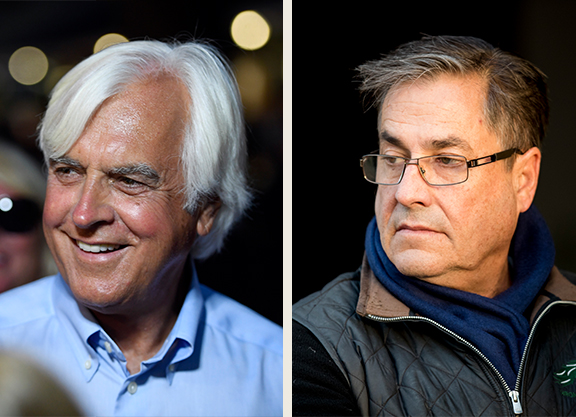 I don't vote and, of course, John Sadler and I are both biased. We both trained two really good horses and had really good years with them. The Triple Crown is the biggest arena the sport has. It is the holy grail of our sport. What Justify did was pretty incredible. He ran six races right in a row and won them all. That takes an incredible athlete to do something like that. I've been fortunate and blessed to train some great horses. He had six outs. Accelerate, who had a great year, had seven outs. But they were spaced out and John did a fantastic job of managing him. Justify had to toe the line. I didn't have a chance to pick or chose with Justify, he had to just go. We couldn't miss a beat with him, and he pulled it off. You can't do that unless you have an exceptional horse. We've seen so many horses go down in the Belmont. I should know. They fail when they get there. It takes an exceptional , superstar kind of horse, and that's what Justify is. My take on it is that it is incredibly difficult to win the Triple Crown and he made it look easy. With him and Pharoah, great 3-year-olds, there is something about them, their mechanics, their genetics…they are superior horses and he was a superior horse. People knocked us because the horse never ran after the Belmont, but he couldn't run, he had an injury. Unfortunately, those things happen. I was just as sad as everyone else when we had to stop on him. I wouldn't have had any doubts about him handling older horses. If he was that good in the spring of his 3-year-old year, just imagine how much better he would have been come the fall. He would have been twice as good.

Full disclosure to everyone: I'm biased and I do not have a vote for Horse of the Year, but if I did, it would be for Accelerate. At the beginning of 2018, we mapped out a year-long campaign that was crafted to get Accelerate to the Breeders' Cup Classic at Churchill Downs. During that period, Accelerate hit every mark we needed him to in his training, never took a misplaced step or had a setback. Accelerate went on to compile a race record of six wins from seven starts, was the high- weighted/co-highweight horse in six of those races and five of those wins were at the highest level, Grade I, going 1 ¼ on dirt– the quintessential “Classic” distance in U.S. racing. From a historical perspective, only four other horses have achieved this feat since 1975 and three of those were named Horse of the Year in their respective years (Affirmed in the pre-Breeders' Cup era, Alysheba and Cigar since the inception of the Breeders' Cup…Lava Man was the other and he was defeated by Invasor (Arg) in the 2006 Breeders' Cup Classic, their only head-to-head meeting.) The Breeders' Cup is, by our sport's definition, the Championship event of horse racing. Winning the Breeders' Cup Classic is the equivalent of the Super Bowl and more times than not, the winner of that event has been named Horse of the Year. Accelerate did all those things in 2018, ran superior speed figures (by whatever metric you use) and did not duck anyone in the process.

It would be remiss to not acknowledge Bob Baffert and the connections of Justify for their achievements. The constraints of the Triple Crown are well known and there are no “do overs” on the trail. Bob's record in the Derby, Preakness and Belmont needs no preamble at this stage of his career and what Justify did in a short amount of time was another of his achievements that made history. I'm sure the connections of Justify are disappointed that they were not able to finish out the year due to injury. As a sport, we were all denied the opportunity to see these two horses compete head to head in our Championship event. That said, Accelerate should not be penalized because Justify was unable to run and he did.

On a final note, while Justify overcame the “Apollo curse,” Accelerate overcame my much-maligned Breeders' Cup record. That's a Horse of the Year achievement unto itself!