So, Who Would You Ride in the Derby: Alex Solis 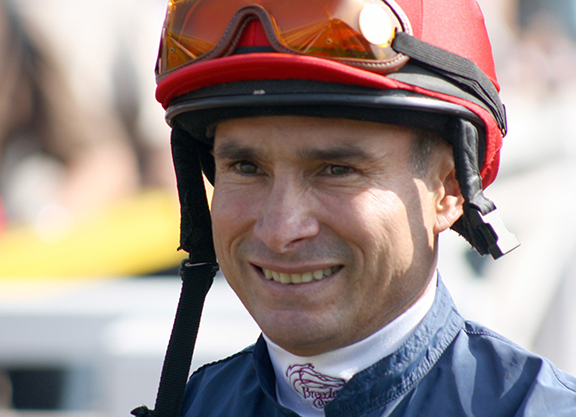 The TDN has polled some of the top riders in the history of the sport and asked them to answer this simple question: If given a choice of any of the 20 starters in the GI Kentucky Derby, who would you choose to ride? Today, we ask Hall of Famer Alex Solis.

Definitely Omaha Beach (War Front). I work for (Richard) Mandella and I’ve been around that horse since he was two years old. We always thought he was the type of horse who was very talented and very smart. He’s a dream horse to ride. I worked him many times before he had all his success and we always thought he was so talented. He’s also one of the coolest horses I’ve ever been around. His personality is great and he is very smart and beautiful to ride. We couldn’t figure out what was wrong when he kept running second. We just kept working on him and did little things to help him get some hints about what he needed to do. When he broke his maiden in the mud, it was like he just woke up. From then on, he has been running the way he has. He came around at the right time. It didn’t hurt that we tried him on the dirt, but he’s the type of horse who would be talented no matter where you ran him or on what surface. He was just one of those slow learners, but he really woke up after he broke his maiden. He is super talented and he is smart. He has all the qualities you look for when it comes to a Kentucky Derby winner.