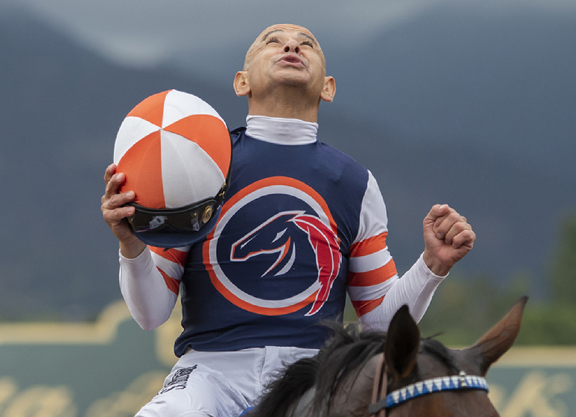 The Jockey Club of Saudi Arabia has rejected the appeals brought by jockey Mike Smith against the severity and length of suspensions handed down by stewards for a pair of infractions on the Saudi Cup program Feb. 29. The Technical Committee of the JCSA did agree to allow the local authority of the appellant to determine the dates of the suspension.

Smith received two suspensions totaling 11 race days on the Saudi Cup program Feb. 29. He was handed a two-day ban for failing to weigh in following a fifth-place effort on one of the undercard races which also saw the horse he was riding disqualified to last. Smith was also hit with a nine-day suspension for using his whip “with excessive frequency and without regard to the horse's stride pattern” when guiding Midnight Bisou (Midnight Lute) to a runner-up effort in the Saudi Cup itself. He was also fined 60% of his share of the $3.5 million earned by the 5-year-old mare.

The JCSA Technical Committee rejected the appeals “in substance and supported the original decisions of the stewards regarding the length of the suspension and refused to overturn the stewards' decision relating to the retention of prize money.

An appeal by jockey Irad Ortiz, Jr., who was handed down a total of 10 days for one ride on the Kingdom Day program Feb. 28 (eight days) and for his ride aboard Mucho Gusto (Mucho Macho Man) in the Saudi Cup, was also heard. Ortiz, Jr. was also fined 10% of his cut of prize money, but his appeal against the sanctions was limited to the proposition that his days of suspension should be amended consistent with his position as a rider in the U.S. As with Smith, the Technical Committee agreed to allow local authorities to render a final determination.

In an unrelated matter, Smith's mount in the second leg of the Feb. 28 International Jockeys' Challenge, Sun Hat (Ire) (Helmet {Aus}), was disqualified from a 7 3/4-length victory and placed last for a cobalt positive. Smith added a second victory in the four-race series to claim an apparent victory, but the demotion means that Sibylle Vogt is the newly adjudged winner with 32 points. Mickaelle Michel, whose mount was promoted to victory in the second leg, moved up to second (20 points), while Smith's 18 points was good enough to hold on for third.