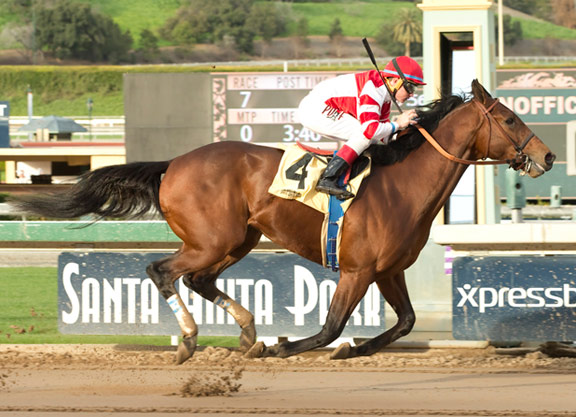 1st Dam: Rigoletta (GISW, $184,070), by Concerto
2nd Dam: Almost Aprom Queen, by Montbrook
3rd Dam: Romantic Dinner, by Who's for Dinner
Battle of Midway became the latest “TDN Rising Star” for Fox Hill Farms and Jerry Hollendorfer, who also campaign champion and “TDN Rising Star” Songbird (Medaglia d'Oro), with a professional debut victory in Arcadia Saturday evening. Pressing from a head second through a sharp first quarter in :21.67, the $410,000 FTSAUG buy drew even with the pacesetter approaching the far turn. Taking over with ease as they hit the half in :44.42, the 3-1 shot effortlessly rolled clear in the lane to win by 3 1/4 lengths over Palmer's Way (Gemologist). The winner's dam Rigoletta captured 2010 GI Oak Leaf S. for Thor-Bred Stable and trainer Dan Hendricks following a third-place finish in the GI Darley Debutante S. Battle of Midway is her second foal, but first to make it to the races. The 9-year-old mare has since produced the juvenile filly Gold Arrow (Medaglia d'Oro) and a yearling colt by that same Darley sire. She was bred back to Empire Maker. Lifetime Record: 1-1-0-0, $32,400.
Click for the Equibase.com chart, the free Equineline.com catalogue-style pedigree or VIDEO, sponsored by Fasig-Tipton.
O-Fox Hill Farms, Inc.; B-Thor-Bred Stables, LLC (KY); T-Jerry Hollendorfer.