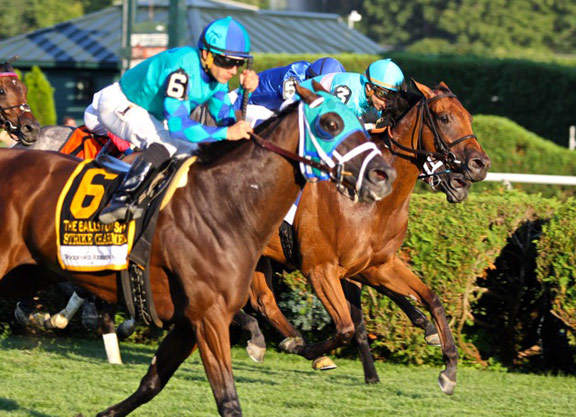 Double-digit longshot Strike Charmer was the surprise of the day Saturday at Saratoga, upsetting heavily favored and previously undefeated Lady Eli, who was making her return to the track after a battle with laminitis and over a year on the bench. Strike Charmer caboosed the field early as the favorite's stablemate Sympathy (Henrythenavigator) did her job up front, clicking off early splits of :22.43 and :45.55. Lady Eli swung out four wide to launch a bid turning for home and Strike Charmer was right behind her, even tipping out a path further in early stretch. Lady Eli locked horns with MGSW Sentiero Italia and those two battled it out down the lane, both refusing to surrender. Sentiero Italia finally weakened a bit in the final sixteenth and Lady Eli looked the winner, but Strike Charmer was just finding her best stride and slipped by the favorite late for a narrow score.

“I didn't know they'd go that fast early but we were where we needed to be with the pace being that way,” said winning trainer Mark Hennig When Junior got off of her last time he told me, 'If I get her outside, she really wants to punch.' He said she was making up ground last time and she really wasn't even fully extending herself. He felt like having learned something from riding her once, it would be wise to just kind of sit. Lady Eli took the overland route and I thought he did a great job of just kind of hiding out behind her and then trying to pounce. We were fortunate enough to run her down today.”

Winner of the 2014 GIII Cardinal H. for previous trainer David Carroll, Strike Charmer made her debut for the Hennig barn a winning one in a Nov. 26 Aqueduct optional claimer. Off the board in the GIII Marshua's River S. Jan. 9, the bay was second in the Plenty of Grace S. back at the Big A Apr. 16 and won Belmont's GIII Beaugay S. May 14. A non-factor eighth in the GI Just a Game S. downstate June 11, she failed to fire again when fifth in this venue's GI Diana S. last time July 23.

Out of SW Cat Charmer, the winner is a half to MSP Sweet Dreams; and the 2-year-old colt Mighty Miner (Mineshaft). Strike Charmer has a yearling full-brother and her dam was bred back to Curlin. She also traces her lineage back to champions Gold Beauty (Mr. Prospector) and Sky Beauty (Blushing Groom {Fr}); English Horse of the Year Dayjur (Danzig); and MGISW Maplejinsky.

Lady Eli may not have crossed the finish line first, but she still came home a winner Saturday. Assistant trainer Cherie Devaux stood at the rail in tears as she waited for her charge to return, saying, “I'm not crying because she lost. I don't even know why I'm crying.” Those nearby hugged her and patted her shoulder in understanding. Lady Eli had done what many could not in not only overcoming the often fatal disease of laminitis, but returning to the track.

Most of the press stood awaiting her return rather than winner's and the crowd cheered and yelled out her name as she trotted back to the spot where De Veaux and trainer Chad Brown were waiting. Brown was the first to pat the filly on the nose before walking off to dicsuss the race with jockey Irad Ortiz, Jr.

“She ran very well,” Brown told the NYRA notes team. “I'm a little disappointed she got beat but I'm happy that she's back to the races. It looked like she just got a little tired that last part. She made a big move there on the turn under a wicked pace and it just took a little too much out of her.”

He continued, “[Jockey Irad Ortiz, Jr.] said he got her off the fence down the backside so they wouldn't trap her. He gave her a little bit of a wide trip but really didn't want to get in trouble with this filly. He said he moved into a pretty strong pace. He didn't want the two other horses in the race, Sentiero Italia and Miss Temple City, to get too far away from him so he moved up on them and felt he had them all measured. He just didn't imagine that horse coming from the back and getting him. That's the way it worked out. We'll build off this race.”

Ortiz added, “She came off a year layoff, an injury. I'm just glad she made the race and came out great. She felt good. She probably needed the race.”

The fans continued to cheer and call out to Lady Eli as Devaux held her for a quick hosing and they continued to praise her as the assistant trainer led her off the track, patting her neck as they went for a job well done. —Christie DeBernardis