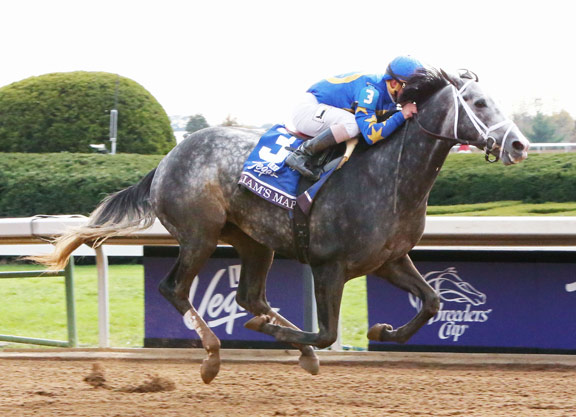 Entering Friday's GI Las Vegas Breeders' Cup Dirt Mile, racing luck–or, specifically, bad racing luck–probably had a better chance of beating Liam's Map (Unbridled's Song) than any of the 10 other rivals that signed up to take on the fleet gray. As it turned out, fate nearly intervened, as the $800,000 Keeneland September yearling purchase missed the break and was snookered away as some of the opposition tried to capitalize on the early misfortune. But the good ones always seem to find a way to win when the chips are down, and Liam's Map finally found running room as they cornered and powered away from Lea (First Samurai) for an ultimately comfortable 2 1/2-length victory. Red Vine (Candy Ride {Arg}) sat a ground-saving trip, but made no late impact and finished a distant third.

Accorded 'TDN Rising Star' status off a 9 1/2-length maiden win at Belmont last September, Liam's Map thrashed first-level allowance foes by 11 1/2 lengths going Aqueduct's one-turn mile in November and turned back Valid (Medaglia d'Oro) by a hard-fought half-length in the Harlan's Holiday S. at Gulfstream Park the following month. Given the next six months off, the gray hit the ground running, annexing a June 19 allowance in Elmont, then, trying nine furlongs for the first time, set a searching pace in the GI Whitney S. at Saratoga Aug. 8 and looked as if he'd find the wire first, but was tagged on the wire by fellow Rising Star Honor Code (A.P. Indy). He proved that effort took little toll on him, as he was able to control things from the front end in the GI Woodward S. at the Spa Sept. 5 and proved easily best over his stablemate Coach Inge (Big Brown), with Wicked Strong (Hard Spun) a non-threatening third. Connections were forced to choose between the known commodity of the Dirt Mile and the unknown of the Classic and had the last laugh Friday afternoon.

Liam's Map hesitated noticeably at the break and was consigned to about fourth position entering the clubhouse turn, as Bradester (Lion Heart) and Mr. Z (Malibu Moon) argued things up front and Lea took up a prominent spot while three wide from third. Javier Castellano had a fistful of horse as they moved inside the final three-quarters of a mile and the colt tugged for his head while still short of room. A gap appeared for a split second between the dueling pacesetters at the five-furlong marker, but it soon closed up and Liam's Map was forced to check back as Lea rolled up to make it a line of three nearing the third corner. For the next eighth of a mile or so, Joel Rosario aboard Lea looked around in an attempt to locate the favorite and the Claiborne/Dilschneider surged to the front and cut the corner into the stretch traveling ominously well. But not long after, Castellano and Liam's Map found the running room they'd been looking for, spun four wide into the lane, grabbed Lea with 100 yards to run and pulled clear.

“I was very concerned,” winning trainer Todd Pletcher admitted. “The one thing Javier [Castellano] talked about is that he's a horse with a lot of speed, but he's not always quick away from there on the first step. We were hoping he'd get a clean break, but he didn't and was behind horses. I was very concerned at that point.

He continued, “What was so impressive is that he recovered a couple times. He got steadied about the five-eighths pole and didn't have anywhere to go. But every time Javier had to tap on the breaks a little bit you could see Liam's Map jump back into the bridle. I kept hoping. I kind of lost him at the five-sixteenths pole, but when I saw him turning for home I could see he had some momentum.”

Liam's Map is easily the best foal out of Albaugh Family Stables' Miss Macy Sue, who was ironically third in the inaugural Breeders' Cup Filly & Mare Sprint at Monmouth Park in 2007. Miss Macy Sue is also the dam of TDN Rising Star Taylor S (Medaglia d'Oro), winner of the Any Limit S. and third in this year's GII Forward Gal S. at Gulfstream Park. Miss Macy Sue is the dam of a yearling colt by Giant's Causeway and a weanling colt by Bodemeister. The Albaughs will be represented in Saturday's GI Breeders' Cup Juvenile by Brody's Cause (Giant's Causeway), winner of the GI Claiborne Breeders' Futurity, and Unbridled Outlaw (Unbridled's Song), a troubled third in the GIII Iroquois S. at Churchill Sept. 12.