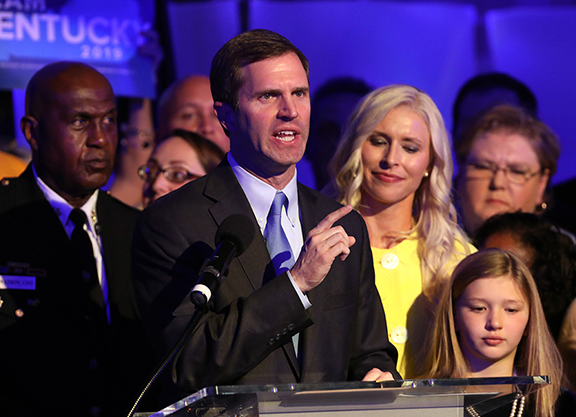 Kentucky Governor Andy Beshear on Tuesday reaffirmed his vow to sign the historical horse race (HHR) gaming bill that passed both chambers of the state legislature last week, but he explained that a decision by the Senate to adjourn through this week means that the HHR-enabling measure won't become law until the end of the month at the earliest.

Beshear's remarks came via videoconference at the start of the Feb. 16 KHRC meeting. After the governor spoke, commissioners unanimously voted in a series of “emergency” measures contingent on the bill getting signed into law that are designed to keep HHR churning in the interim so the revenue that helps to pay for purses in the state continues to accrue.

The KHRC on Tuesday also gave the preliminary go-ahead for Kentucky Downs to begin the process of planning to open an “extension facility” that will operate HHR gaming and simulcasting, similar to the satellite location that opened 12 miles from Turfway Park under that track's licensure late in 2020.

State regulations allow each licensed racing association to operate an extension betting facility that's located within a 60-mile radius of its track.

Beshear and KHRC chairman Jonathan Rabinowitz spent the opening part of Tuesday's meeting lauding racing industry participants and regulators and thanking long lists of politicians for working toward the passage of SB 120. But it was not until the close of his seven minutes of remarks that Beshear dropped the only newsworthy nugget of his speech.

“It was unfortunate on Thursday that the Senate went ahead and recessed, which meant when [SB 120] passed the House, they couldn't enroll it and send it to my desk,” Beshear said. “They can't do that until they come back into session. With the news [Tuesday] that they're not coming back this week, it looks like it's going to be all the way into next week.

“That's regrettable,” Beshear continued. “I was certainly here in the [capitol] building Thursday night, and I know it's something that we would have all liked to have [had signed into law]. But, we did get the bill through, and my commitment—I'll make it today publicly—I will sign that bill as fast as it reaches my desk.”

The most telling comment from Rabinowitz underscored that in exchange for the legislature's redefining of “pari-mutuel wagering” so it now includes HHR, the tracks will now be under political pressure to cooperate on pending legislation that will raise Kentucky's taxes on HHR.

“I assured the legislators that this commission is committed to holding the [tracks] to their commitment to work constructively to revise and raise the tax structure of HHR,” Rabinowitz said. “Knowing the leaders that made those commitments, there's no doubt in my mind that the [tracks] will fulfill those promises.”

Prior to the unanimous voice vote that ratified the KHRC's conditional approval of the Kentucky Downs request to expand its licensed premises so it can include a to-be-built extension facility, it was revealed that no location for the HHR/simulcast business has been publicly disclosed, and that no firm timetable has been established for its opening.

Marc Guilfoil, the KHRC's executive director, told commissioners that “My understanding is that they've got it down to two, maybe three [locations as of] a month ago. They did not want to disclose those because of competition.”

Guilfoil added that “I think a timeline is very close to being started now that we got SB 120 passed.”

Jennifer Wolsing, the general counsel for the KHRC, said the Kentucky Downs request
came to the commission back on Dec. 4, and she noted that the new facility will not be within a 60-mile radius of another track or 40 miles from an existing simulcast facility.

Beyond the HHR business that made up the bulk of Tuesday's agenda, the KHRC unanimously approved a live racing request by Keeneland Race Course to drop Thursday, April 1, from its upcoming spring meet. This move allows the track to revert to a traditional Friday opening day; the request had the approval of recognized Kentucky horsemen's groups.