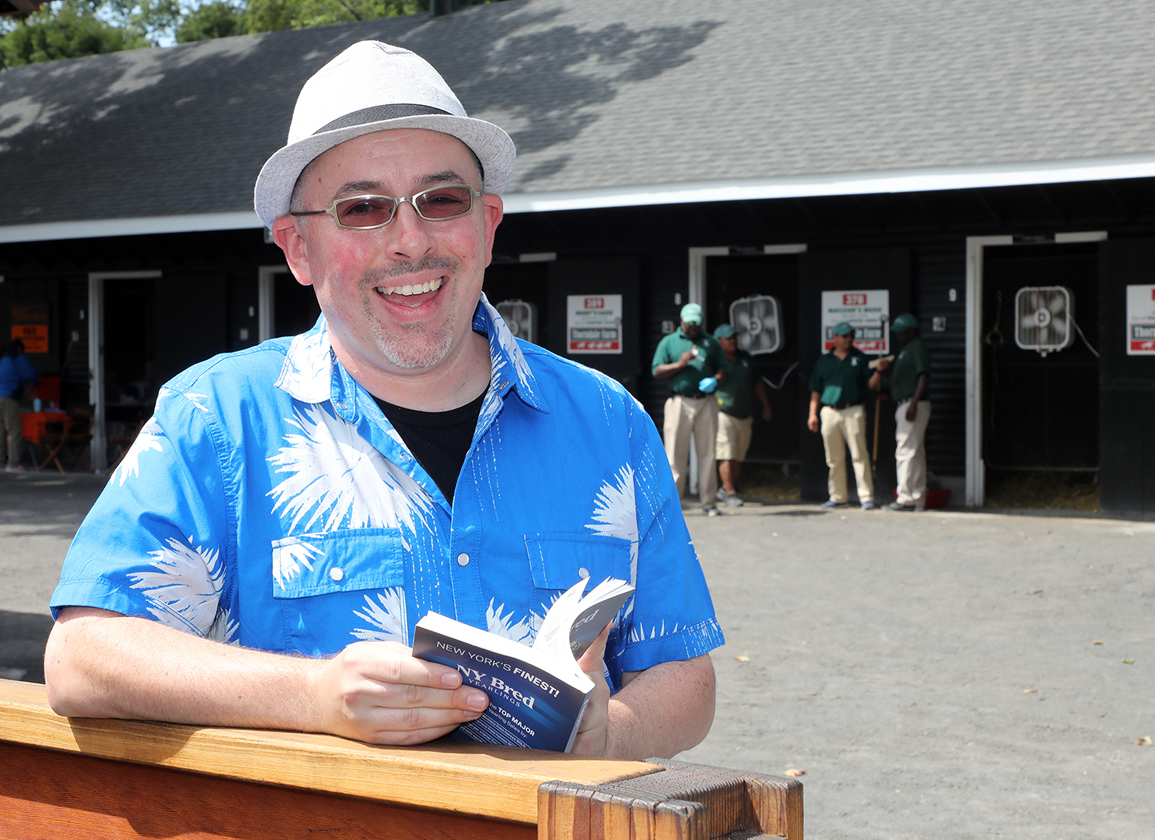 Michael Slezak may have been watching the Kentucky Derby alongside his 11-year-old twin boys from his living room in Jersey City, but he celebrated like he was about to receive the trophy himself when Rich Strike (Keen Ice) scored the second-largest upset in the race's 148-year history.

A former TVLine and Entertainment Weekly journalist, Slezak is now a full-time bloodstock agent who also dabbles in TV pilot script writing. One month and a day before Rich Strike made Derby history, Slezak claimed the colt's half-sister My Blonde Mary (Oxbow) for $5,000.

“I am not a quiet race watcher,” Slezak admitted as he relived his Derby day experience. “My kids will be like, 'He's screaming again.' I'll also scream in a race for a $4,000 claimer but in this case, I lost my damn mind. I was like a crazy person. I felt like I had won the Derby.”

The purchase of My Blonde Mary for client Mary Jane Nuckols was a Michael Slezak special. The agent focuses on finding value with fillies and mares competing in the claiming ranks by meticulously studying every claimer entered to race while giving scrupulous attention to pedigree activity and family members that could have a breakout race performance or auction result. An array–or maybe a disarray–of notes cover the surface of his desk and on his computer, comprehensive spreadsheets would make little sense to anyone but Slezak himself.

“I look at every claiming race for fillies and mares in North America every day,” Slezak said. “It's a lot of work, but I liken it to Roger Federer or Serena Williams. They go out on the court and hit thousands of forehands every day so it's like second nature. For me, looking at claiming races every day almost becomes muscle memory. Sometimes you get a sensation that things seem to be coalescing with a family. It's like puzzle pieces that come together.”

Slezak first spotted My Blonde Mary well before Rich Strike came into the picture or had even made his first start. In her 4-year-old debut last February, she had one win from 10 starts, but Slezak noted that she was out of a Canadian champion and a half to a Grade II winner. The pedigree was enough for him to keep an eye on her, but he was still waiting for some recent activity in the family. When Rich Strike ran third in the GIII Jeff Ruby S., it was enough for Slezak to go after her as she competed in the claiming ranks at Tampa Bay this spring.

“It would be a bald-faced lie to tell you that I thought Rich Strike could win the Derby when we purchased the mare, but it's always cool to have a sibling on the Derby trail,” Slezak said. “She was a terrific mare that we weren't spending an arm and a leg on, plus you have the extra cachet to say you own the half-sister to that horse when you're at your Derby party.”

Slezak had an additional rooting interest on Derby Day. Last June, he purchased Time Sensitive (Nyquist), the half-sister to Derby contender Tawny Port (Pioneerof the Nile), after seeing Tawny Port's six-figure purchase price and noting that the colt was going to Brad Cox. When Tawny Port was two-for-two early this year, Slezak decided to run Time Sensitive through the Keeneland January Sale.

“She only brought $15,000, so my timing on that one was not stellar,” he admitted. “Fortunately it was for me and not a client, so I had nobody to yell at me except for myself.”

Even still, to pick out two half-sisters to Derby starters from bottom-level claiming races, Slezak was thrilled.

“I hope to repeat that every year,” he said with a laugh. “Of course it's not going to be that easy, but you can dream and you can do the research. With a lot of my clients, they're looking for commercial success to make money, but if you have that additional boost of having a connection to someone running in the Derby, the Oaks or the Breeders' Cup, that's icing on the cake.”

Growing up in upstate New York, Slezak's earliest memories are of his parents taking him to the races at Saratoga. He learned to read by studying the racing form and was always fascinated by pedigrees. He worked as an entertainment journalist for several decades, but racing always called to him. Seven years ago, he decided to make a career change and enter the Thoroughbred business.

When Slezak was first getting started, only a quarter of his purchases were for clients and he invested in the remainder himself. As he gained experience and celebrated early success, he began taking on more clients to where these days, the majority of his purchases are for other people.

Slezak said most of his principals have stayed the same from when he first started his business until now, but he added that his research system has become even more comprehensive.

“I think I've gotten better at understanding what the market wants,” he explained. “I'll find a hard-knocking, multiple stakes-placed mare, but if she's by a super obscure stallion, that's a harder sell. I'm also branching out a little more into buying in-foal mares at auction and selling their weanlings or yearlings. I'm trying to diversify and find other areas where I can identify horses selling for less than what they're worth.”

Slezak has already amassed an impressive list of success stories.

In 2018, he purchased You Laughin (Sharp Humor) for $2,000 when she was the last mare through the ring in one of the final sessions of the Keeneland November Sale. He sold her for a profit a few weeks later after her colt Zenden (Fed Biz) won a stake at Gulfstream Park.

Last January, he purchased the mare I Dazzle (Hold That Tiger) in foal to Catalina Cruiser for $13,000. In November, he sold the resulting filly for $100,000.

Of course, not every purchase is a home run. While Slezak isn't afraid to go with his gut when purchasing a prospect, he must also be willing to sell them when a family update doesn't happen after a period of time. Several years ago, he claimed the filly Tizn'tshebeautiful (Uncle Mo) in her debut and later sold her as a broodmare prospect for $45,000 at the 2017 Keeneland January Sale. Two months later, her half-brother Tiz the Law (Constitution) was foaled.

“Had I held onto her until Tiz the Law was a Classic winner, we could have done better,” he lamented. “I can't keep them all. But now, Tiz the Law won the Belmont and My Blonde Mary's brother won the Kentucky Derby, so I just need a Preakness winner to complete my own Triple Crown.”

Slezak stressed that his program is built on more than just studying the horses he might claim. Another big piece of the puzzle is following stakes horses, impressive maiden winners, and auction results to find updates on the racemares he already has tabs on. As was the case with My Blonde Mary, one important result from a sibling could tip the balance to make a mare worth pursing. He also noted that his network of connections at the track are essential in getting eyes on a mare before he claims her.

“There's so much potential to find value and it's really fun,” he said. “There's something crazy about these hard-knocking mares running for a bottom maiden claiming tag when somewhere at a bigger racetrack in a different time zone, there's a horse percolating toward the Kentucky Derby.”

Slezak hopes to continue to grow his business while keeping the same conservative approach with the mares he purchases. He said he enjoys the flexibility this career provides. Currently working on his third TV pilot script, he can also make time to attend his sons' soccer games and help them study for math tests.

“It has been a fun career change, even though my previous career was watching TV for a living which was also pretty fun,” he said. “It's never dull and everything about it is completely fascinating to me. It's been something I've been interested in and reading about for my entire life and I feel like there's so much more to learn. There's constantly new information and things to get better at.”

Slezak knows it will be difficult to replicate his results from this year's Kentucky Derby, but he is eager to give it a try.

“It was a great weekend, but now that those horses are claimed and the race is done, the question is, who is the next horse we're going to claim? How do I try and duplicate that? I couldn't wait to check out last week's claiming races to see what all was out there.”