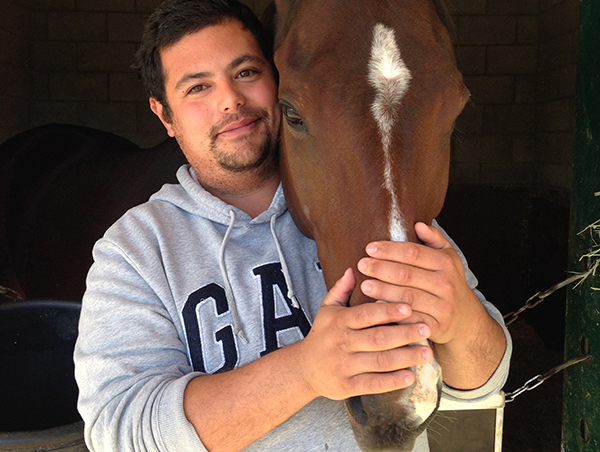 By Jonathan Murrietta
Trainer Jonathan Wong is a new face in thoroughbred racing. The 26-year-old from Northern California hasn’t even been a trainer for a full year, yet he sees limitless opportunities for himself in the “Sport of Kings.”
“My ultimate goal is to move my barn down to Southern California,” Wong says. “It’s competitive, but there are more opportunities out here.”
The San Francisco native, who grew up going to Bay Meadows and remembers listening to track announcer Tony Calo announce “And there they go!” in that classic throaty voice, is now deeply immersed in the game as a trainer. Wong is winning races at a 35% Though his operation is based in Northern California, running horses primarily at tracks like Golden Gate Fields, Wong’s four starters at Del Mar this fall have all been in the money, with a win, two seconds and a third.
But amidst his early success, Wong remains humble and credits others with the praise.
“It makes it easy when you have trusting owners that let you run horses where they belong,” Wong says. “I have hardworking grooms too.”
Wong started working in racing at 16 years old, grooming horses for Art Sherman and Lonnie Arterburn. He also served as assistant trainer under John Martin, working for the Northern California horseman for almost a decade.
On one of those days working for Martin, while helping saddle a nervous horse in the paddock before a race at the Big Fresno Fair, Wong sustained a concussion and a cracked rib. The fractious horse lunged toward his groom and Wong pulled the groom out of the way; however, in the process was injured himself. When asked if that experience gave him doubts as to whether he should pursue a career in training horses, Wong just smiles and merely says, “There’s never been a doubt I’ve always wanted to be a trainer.”
Wong soon caught the attention of horse owners David Cobb and Scott Herbertson, who took notice of Wong’s work ethic.
“I noticed early on that Jonathan was an extremely bright kid, tenacious worker, and had a great deal of integrity,” Herbertson says. “I don’t think I’ve ever seen anyone with such a good eye for horses, I mean he’s like a wine sommelier.”
Like the art of cultivating fine wine, Wong studied the art of taking care of and training thoroughbred athletes in Northern California for years, honing his craft delicately and slowly. He learned how to put bandages on horses, inspect them, and eventually train them.
It was not long before Herbertson, along with son Ari and David Cobb gave Wong the chance to train a few of their horses. Soon, Wong would reap a harvest, getting his first win as a trainer Feb. 6, 2015 in a $3,200 claiming race at Golden Gate Fields, when heavily favored Pressure Time (Freespool) won by two lengths.
“You’d think I’d won the Kentucky Derby,” Wong says.
Another highlight in Wong’s first year as a trainer came when Wong entered six horses for Herbertson at Pleasanton, a racetrack at the Alameda County Fairgrounds in Pleasanton, California. All six won.
Yet arguably the most gratifying win for Wong came at Golden Gate Fields Nov. 6, when Wong gave jockey Jonathan Hernandez the chance to ride his first winner in the States. Both Jonathans were ecstatic after the race.
“That was the most fun-seeing [Hernandez] so happy,” Wong says.
Wong delights in making others around him happy, whether it’s his jockeys, hot walkers, grooms or his owners.
“If my owners are having fun, I’m having fun,” Wong says.
Over the years, Wong has found it fun playing the claiming game. He relishes the challenge of claiming horses to turn them around to win next time out and now he has a small, yet productive barn of 16 horses. A few of his claims have really turned into solid horses since coming into his barn. Just Gone (Spring at Last), a horse Wong claimed at Golden Gate, for example, has since won five of six. Feisty’s Cause (Cause Ur Mine), once a three-year-old maiden accustomed to just stopping at the sixteenth pole in $12,500 claimers, has turned into a runner since entering Wong’s barn, winning two starter allowances and running third in an open first condition allowance race against older horses at Del Mar.
Back at Del Mar, where Wong is in town for a few days, it’s another busy early morning. He’s looking to make more contacts in the competitive Southern California thoroughbred market and grow his barn.
“This game is often a rollercoaster, but hopefully our success will continue,” Wong says.