'Skydiver' Looks to Soar in Alabama 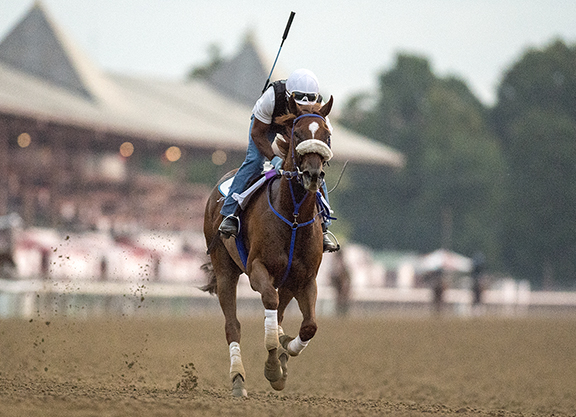 On paper, Peter Callahan's Swiss Skydiver (Daredevil) appears to tower over six others in Saratoga's GI Alabama S., a Breeders' Cup 'Win and You're In”  event for the $2-million GI Longines Breeders' Cup Distaff.

The chestnut reeled off consecutive wins the GII Gulfstream Park Oaks Mar. 28 and the May 12 GIII Fantasy S. at Oaklawn Park before a front-running, four-length win in the GII Santa Anita Oaks June 6. Facing the lions in the GII Toyota Blue Grass S. at Keeneland July 11, the lioness offered a roar of her own to finish a respectable second behind Art Collector (Bernardini), subsequent winner of the Runhappy Ellis Park Derby last weekend. Tyler Gaffalione, who rode the filly in her first two career starts, including her Churchill Downs graduation last November, has the mount on Swiss Skydiver.

“Once we got her going to two turns, she really figured it out and it clicked,” explained trainer Ken McPeek. “The farther she goes, the stronger she gets. She's been a real sturdy filly. She eats really well and she's easy to be around. The Alabama is a great race. It's a race I've won before and I would love to win it again.”

McPeek, who won the 2018 Alabama with Eskimo Kisses, also has entered Walking L Thoroughbreds and Three Chimneys Farm's Envoutante (Uncle Mo), who has hit the board in five of six starts this year, including a third in the GI Central Bank Ashland S. at Keeneland July 11. Jose Ortiz, aboard for her two latest starts including an allowance win at Churchill in May, will ride Envoutante.

Lightly-raced Bonny South (Munnings) finished fourth in her career debut at Churchill last November before returning to break through via DQ at the Fair Grounds in December. This season, the Juddmonte hombred took a Feb. 15 optional claiming race at Oaklawn before annexing the GII Fair Grounds Oaks Mar. 21. Most recently, the Brad Cox trainee finished fourth in the Ashland. Irad Ortiz Jr. makes his appearance atop the filly Saturday.

Never one to be ignored when a member of his stable rolls into town, Bob Baffert is represented by WinStar Stablemates Racing's Crystal Ball (Malibu Moon). Third in her unveiling at Santa Anita May 17, she rebounded to score by 6 1/4 lengths next time at the Arcadia oval. Stepping up significantly to face the highest tier in the July 18 GI Coaching Club American Oaks, she came up just a head short of winner Paris Lights (Curlin) in the Spa feature for fillies. On the filly in her latest start, Javier Castellano returns this time.

TDN Rising Star Spice is Nice (Curlin) dazzled with a 12-length score at Gulfstream in January before finishing second in the GII Davona Dale S. the following month. Fifth in the Mar. 28 Gulfstream Park Oaks, the Todd Pletcher-trained filly received a freshener before returning with a professional score at Belmont July 3. Regular pilot John Velazquez gets back on board.