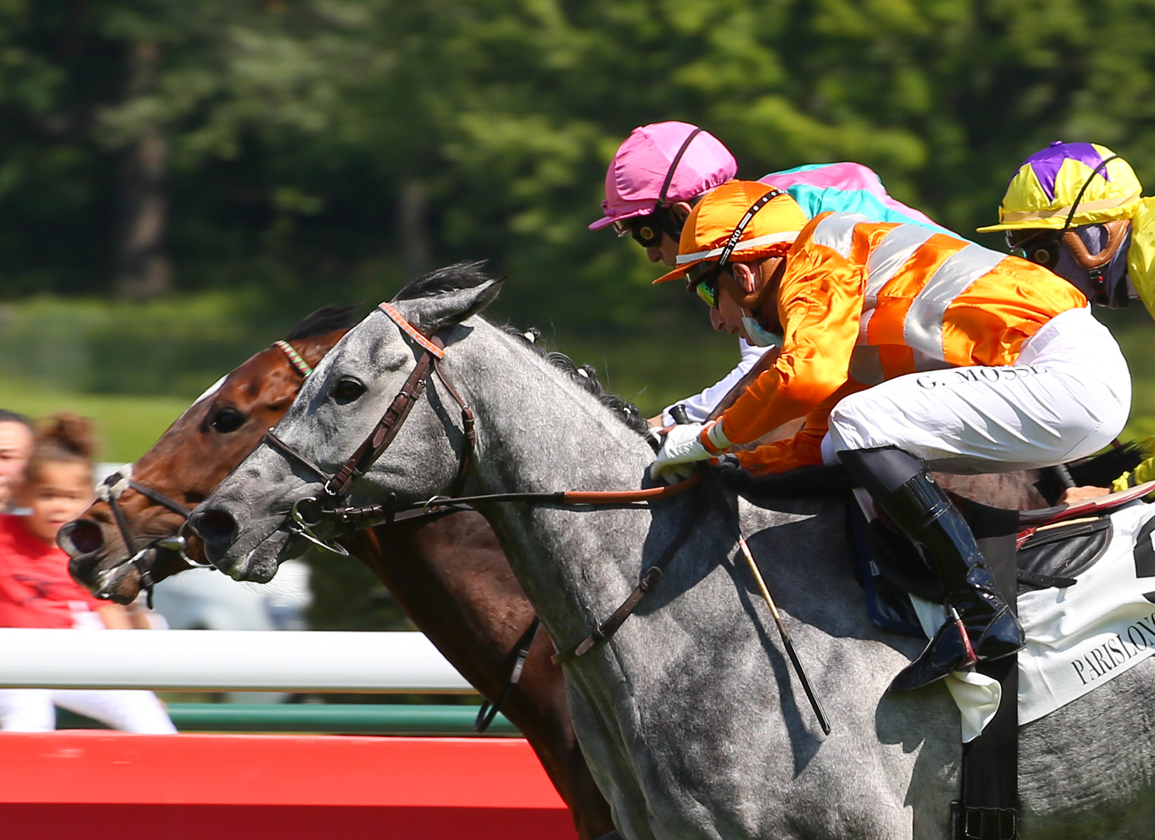 He left it late, but Jean-Claude Seroul's Skalleti (Fr) (Kendargent {Fr}) was in front where it mattered as he garnered the top-level success his record deserved in Sunday's G1 Prix d'Ispahan at ParisLongchamp. Positioned at the tail of the field early by Gerald Mosse, the 7-10 favourite needed every metre of the extended nine-furlong trip to reel in Tilsit (First Defence) and win on the bobber by a head as My Oberon (Ire) (Dubawi {Ire}) finished a short neck behind in third. With The Revenant (GB) (Dubawi {Ire}) a significant non-runner, the way was open for Jerome Reynier's popular grey to make it a red-letter day for connections who had already struck in the G3 Prix du Palais-Royal on the card with Marianafoot (Fr) (Footstepsinthesand {GB}). “Finally, he's got that elusive group 1,” Reynier commented. “He is so brave and has so much talent. The ground was a question mark today, but it wasn't a problem. We passed on the Ganay to freshen him up for today and it was the perfect spot for him.”

Six days on from his full-brother Skazino (Fr) (Kendargent {Fr}) adding this track's G2 Prix Vicomtesse Vigier to his G3 Prix de Barbeville success, Skalleti was winning for the eighth time in pattern company and making it three straight successes in 2021. While the first of those came at a mile in Deauville's G3 Prix Quincey in 2019, the homebred is best at 10 furlongs and the evidence of that could be seen in the frantic final metres of this test as he effectively outstayed the British raiders. With back-to-back renewals of the G2 Prix Dollar here and defeats of Sottsass (Fr) (Siyouni {Fr}) and Mare Australis (Ire) (Australia {GB}) in the G3 Prix Gontaut-Biron at Deauville in August and G2 Prix d'Harcourt here Apr. 11, there is little that Skalleti has left to achieve but Reynier has his eye on one prize. “We always had in our minds the Champion Stakes at Ascot and that is what we are dreaming of,” he said. “We'll give him a break and, depending on the ground, maybe return in the Gontaut-Biron and see from there.”

The lightly-raced Tilsit was putting up a career-best and interestingly was confirming form with his compatriot My Oberon who he had beaten into second in Goodwood's G3 Thoroughbred S. last term. Jockey Vincent Cheminaud said of the Charlie Hills-trained runner-up, “He ran a blinder and behaved very nicely. The ground was perfect for him and he was brave and stayed on nicely. I thought I had it won at one point and the trip was ideal–he doesn't want much further than that.”

Skalleti's dam Skallet (Fr) (Muhaymin) won the Listed Prix Occitanie and was placed in the G3 Prix Fille de l'Air, G3 Prix Penelope and G3 Prix Andre Baboin, but there was no suggestion that she would emerge as a broodmare of such import. All her four foals are by Kendargent, with the first being the Listed Prix du Ranelagh third Skalleto (Fr) and the last being the unraced 2-year-old colt Skalli (GB). The aforementioned Skazino has become one of his country's foremost stayers in the space of a few weeks once upped in trip and it looks only a matter of time before he adds more group 1 laurels to the family.