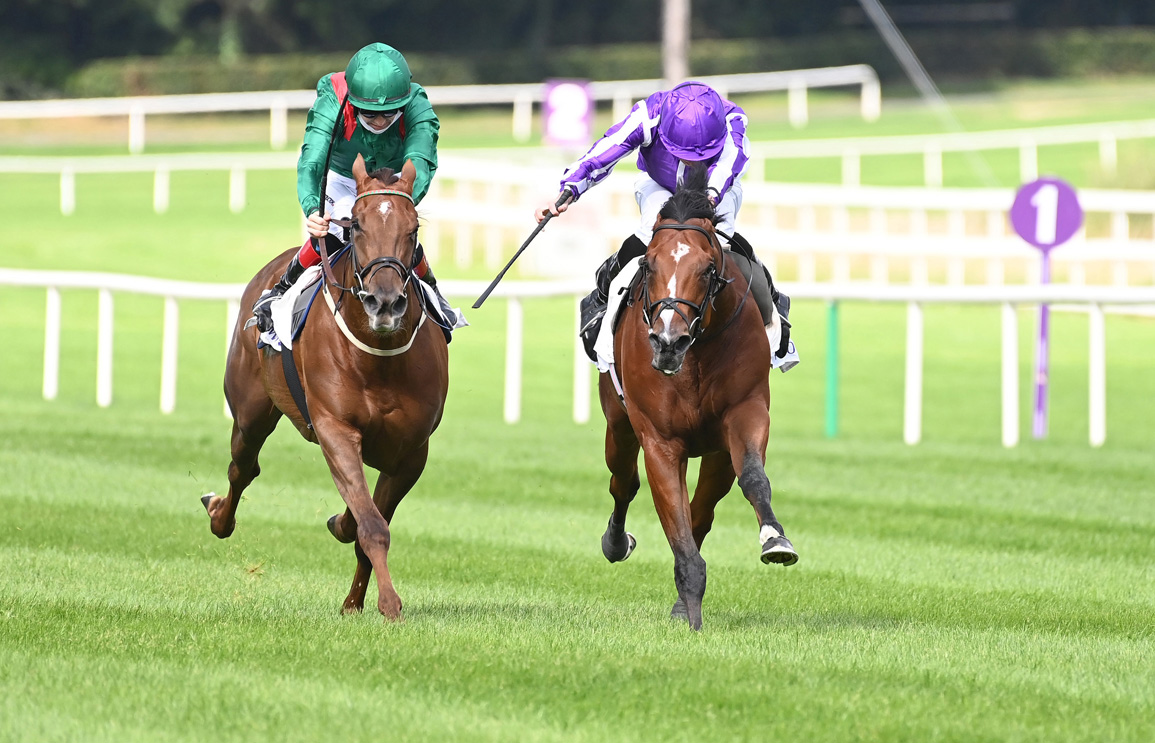 St Mark's Basilica and Tarnawa in the stretch of the Irish Champion S. | racingfotos.com

Saturday's G1 Irish Champion S. at Leopardstown may have been short on quantity, but was certainly not lacking in quality as Coolmore's St Mark's Basilica (Fr) (Siyouni {Fr}) maintained his winning streak at the highest level with a fifth such triumph in a thrilling finale to the €1,000,000 10-furlong contest. Backing up a juvenile high in Newmarket's G1 Dewhurst S., the 3-year-old bay has carried all before him during a banner sophomore campaign,  which has also witnessed victories in the G1 Poule d'Essai des Poulains, G1 Prix du Jockey Club and G1 Coral-Eclipse. Forced to sidestep last month's G1 Juddmonte International after suffering a minor setback at home, he had to dig deep to deny three-time elite-level victrix Tarnawa (Ire) (Shamardal) and G1 2000 Guineas and G1 St James's Palace S. hero Poetic Flare (Ire) (Dawn Approach {Ire}) in a three-way drive. Chantal Regalado-Gonzalez's G1 Grosser Dallmayr-Preis third Patrick Sarsfield (Fr) (Australia {GB}) set the tone with a clear advantage through halfway, ahead of Poetic Flare, the eventual winner and Tarnawa as the field maintained its order until turning for home. Bustled along by Ryan Moore passing the quarter-mile marker, the 5-6 favourite drifted wide towards the stands' side rail soon after and kept on in resolute fashion to deny the even-wider effort of Tarnawa by 3/4-of-a-length with Poetic Flare failing to maintain his early-straight advantage and getting edged out of second by a nose. The track's stewards enquired into possible inteference between the first two, but allowed the result to stand after a lengthy deliberation.

“He's a special horse, he relaxes and quickens and has all the determination from Galileo and all the speed from Siyouni,” said winning trainer Aidan O'Brien after extending his record haul in the contest to 10. “Ryan [Moore] gave him a great ride and I'm delighted. They set off at a nice pace, Kevin [Manning] was in second and he steadied it down to get himself straightened up and set up. The pace went out of the race completely before they turned in [for home], which was unusual, and they sprinted up the straight. He did well because it was very tactical and I would imagine the fractions for those last couple of furlongs were fairly rapid. He had a bit of catch-up to do, after [being forced to miss York] the last day, and one thing we knew is that he quickens. That's what he's always had and his strong qualities are that he relaxes and can really turn it on. He's just an exceptional horse and we're very lucky to have him. All the lads at home have done a great job to get him back here today after the last day. The plan was to go to York and then come here. After that we were going to see what way he came out of it and see what way we were going to go.”

Looking to possible future targets, the Ballydoyle conditioner continued, “He has a lot of options, he can go back to a mile or go a mile-and-a-quarter and all those [top-level] races have to be there. There may be a little bit of a problem with the [G1] Queen Elizabeth II S. [at Ascot on Champions Day]. We know that he handles soft ground, but Ascot can be run in very bad ground.”