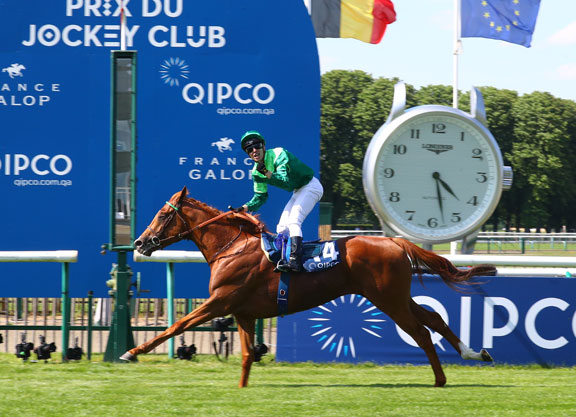 France waited with bated breath, but a famous Classic double was not to be on Sunday as the G1 Poule d'Essai des Poulains hero Persian King (Ire) (Kingman {GB}) succumbed to White Birch Farm's impressive Sottsass (Fr) (Siyouni {Fr}) in the G1 QIPCO Prix du Jockey Club at Chantilly. So authoritative when scoring by 6 1/2 lengths in testing ground in the 10-furlong Listed Prix de Suresnes here May 2, Sottsass was settled in mid-division by Cristian Demuro and had dead aim on Persian King as that 9-5 favourite took over with two furlongs remaining. Swamping him almost a furlong later, the 13-1 chance powered away to score by two lengths in course-record time, with Motamarris (Ire) (Le Havre {Ire}) the same margin away in third. The winning time was an astounding 2:02.90, the fastest Jockey Club by almost three seconds since it was chopped to this trip from a mile and a half in 2005 and the fastest ever race run at this track over this distance by more than a second.

Jean-Bernard Roth, the long-time assistant to Rouget, revealed that the absent trainer had suffered a minor stroke on Saturday night and watched the race from his hospital bed. “This is a long-term job and we always believed in the horse who was well-chosen at the sales and has been improving regularly,” he said. “This is really a great moment and a great team effort and everyone has to be congratulated. The jockey did a superb job and also the track management who have provided us with a superb course for the day. It was a great performance and I know he beat the track record, but sometimes this is something that we don't like to hear too much because then there is talk about long recovery or problems, so we will have to wait and see how he comes out of the race. M. Rouget will decide his future.”

Named after the esteemed Italian architect and designer, Oceanic Bloodstock's €340,000 Arqana August purchase began his career for Peter Brandt with a fourth placing behind TDN Rising Star Lone Peak (Fr) (Lope de Vega {Ire}) over a mile at Deauville in August and had to wait two months to run again. When he did, the chestnut beat Flop Shot (Ire) (New Approach {Ire}) by three lengths on soft ground at Clairefontaine in October and that form was put in a highly favourable light when the runner-up took the May 6 G3 Prix de Guiche in impressive fashion. After a return fifth in the G3 Prix la Force over nine furlongs at ParisLongchamp Apr. 7, Sottsass inflicted a heavy defeat on the subsequent winner Battle of Toro (Ire) (New Approach {Ire}) in the Suresnes but his ability to handle these quick conditions remained in question.

Guided into a mid-division pitch by Demuro, who steered Brametot (Ire) (Rajsaman {Fr}) to glory in this two years ago, Sottsass had the smooth-travelling Persian King on his outer as Shadwell's unbeaten Motamarris and Ballydoyle's pacemaker Blenheim Palace (Ire) (Galileo {Ire}) made it a serious test in front. As Pierre-Charles Boudot moved forward on Godolphin and Ballymore Thoroughbred Ltd's TDN Rising Star entering the straight, Sottsass was following with intent and that formidable rival could only enjoy the lead for less than a furlong. Sweeping past and into the clear with a rare enthusiasm, Peter Brandt's colour-bearer practically silenced the Chantilly crowd who were stunned to see the country's supposed best 3-year-old overturned so comprehensively.

Cristian Demuro, who also rode the G1 Prix de Diane heroine La Cressonniere (Fr) (Le Havre {Ire}) for this stable in 2016, was understandably delighted. “This is my fifth group 1 for M. Rouget and the stable has supported me throughout the years,” he said. “Everybody in the yard is doing a great job and these races are not easy to win, so it's a great moment of emotion. He can be a litle bit keen sometimes, so I wanted to get cover quickly and he travelled very well and relaxed. Turning for home, I found myself in the wake of the favourite very easily and it couldn't have been better for me. Once I moved him out, he really took off. He's a proper group 1 horse and I think a mile and a half will not be a problem.”

That final assertion will be music to Brandt's ears and he paid his own tribute. “I can say that Jean-Claude Rouget really knows his horses,” he said. “I was here when Sistercharlie (Ire) (Myboycharlie {Ire}) was second in the Diane two years ago and this moment today is very special. Even though I have won a few grade one races in my own country, this is right up there and will stay with me for a long time. I won't fill the role of M. Rouget and say where he runs, but what I can say is that I attended my first Arc 50 years ago and that is the race I want to win one day.”

Andre Fabre believed that the 10 1/2-furlong trip was the problem for Persian King. “It was too far for the horse,” he simply surmised. Godolphin's Lisa-Jane Graffard added, “He ran a very good race and I thought he was going to win, but he was beaten by a better horse. He tried hard and that's racing.” Motamarris's trainer Freddy Head said of the third, “I have no complaints in what was his first try at this level,” he said. “He's run a very good race. He doesn't need to lead, he just needs to go at his pace.”

The third dam Allwaki (Miswaki) is also the ancestress of the G3 Prix de Lieurey scorer Sandy's Charm (Fr) (Footstepsinthesand {GB}), while her own dam Alloy (Fr) (Pharly {Fr}) is a half-sister to the G1 Sussex S.-winning champion miler and sire Noalcoholic (Fr) (Nonoalco). Starlet's Sister has since produced an as-yet unraced 2-year-old colt by Charm Spirit (Ire) who was unsurprisingly purchased by Michel Zerolo's Oceanic Bloodstock for €400,000 at last year's Arqana August Sale and is named Radiant Child (Ire). She also has a yearling colt by Fastnet Rock (Aus).