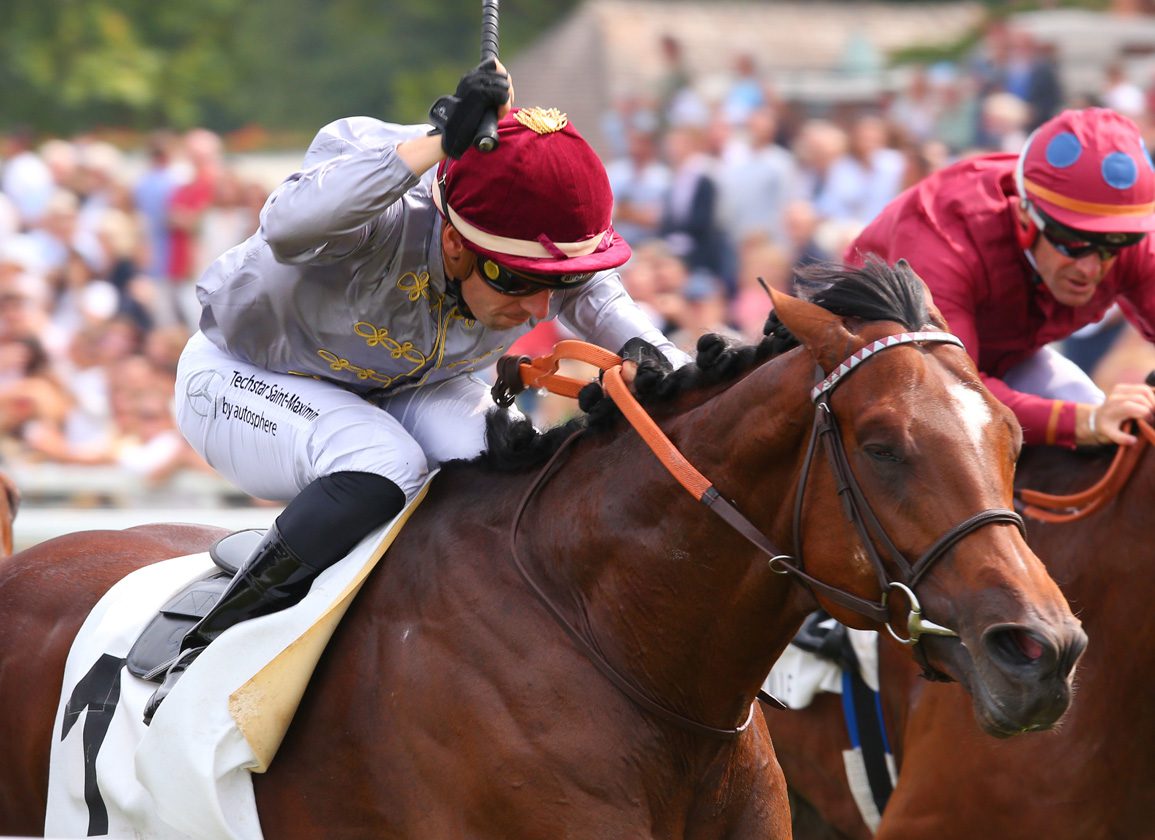 Bouncing back off a fourth in June's G1 Prix du Jockey Club at Chantilly, Al Shaqab's homebred 3-year-old colt Al Hakeem (GB) (Siyouni {Fr}–Jadhaba {Ire}, by Galileo {Ire}) was all heart and regained the winning thread in Monday's G2 Prix Guillaume d'Ornano at Deauville. The January-foaled bay closed his two-race juvenile campaign with a breakthrough success at Chantilly and doubled his win tally back there on seasonal return before earning his black-type stripes contesting the May 3 Listed Prix de Suresnes at Chantilly in his penultimate start. The even-money favourite was a shade keen through the initial strides and settled into a smooth rhythm tracking the leaders in fourth for the most part. Looming large on the bridle turning for home, he seized a narrow advantage passing the quarter-mile marker and was driven out, despite drifting towards the far-side rail, to subdue the persistent G2 Prix Noailles victor Junko (GB) (Intello {Ger}) by a half length in game fashion. Lady Bamford's homebred G3 Prix de Conde runner-up True Testament (Ire) (Siyouni {Fr}) kept on well in the closing stages to finish 3/4-of-a-length adrift in third.

“He ran a very good race in the [G1 Prix du] Jockey Club, he's definitely a Group 1 horse and he will win a Group 1 one day,” insisted trainer Jean-Claude Rouget. “It could be this year or next year, so I hope he stays in training as a 4-year-old. This was a good race for him and he won easily in the end. He's a backward horse, but he's strong and I think the best is yet to come. I think he will stay a mile-and-a-half, but we'll see. I'll discuss plans with the Al Shaqab team and maybe the [G1 Prix de l'] Arc [de Triomphe is a possibility. He could go straight there, but I won't be alone in coming to that decision.”

Tough! French Derby fourth Al Hakeem is first past the post in the Group 2 Prix Guillaume d'Ornano for @CristianDemuro and Jean-Claude Rouget, with Missed The Cut fifth at @fgdeauville! pic.twitter.com/ux8Xl5S0gr