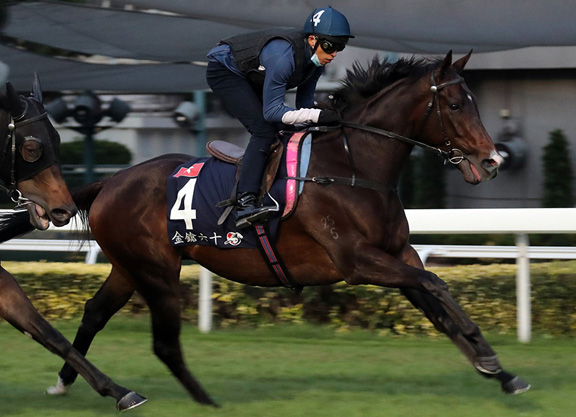 History tells us that when one darling of the Hong Kong turf fades into the sunlight, almost invariably–though not to be taken for granted–another one appears.

Fairy King Prawn (Aus) was the marquee Hong Kong galloper at the turn of the century and it wasn't long after that Silent Witness (Aus) took the jurisdiction by storm, embarking on a 17-race winning streak that included back-to-back runnings of the G1 Hong Kong Sprint in 2003-2004.

A Derby win often paves the path to Hong Kong super-stardom, and such was the case with the likes of Vengeance of Rain (NZ), Viva Pataca (GB) and Ambitious Dragon (NZ), while Hong Kong International Sale grad Good Ba Ba cemented his status as one of the greats with three consecutive victories in the G1 Hong Kong Mile.

Able Friend (Aus) became a fan favorite with his thrilling and irresistible late bursts, Rapper Dragon (Aus) was sadly lost before fully realizing his true greatness and Beauty Generation (NZ) was the undisputed king of the hill through the 2019 season, while Exultant (Ire) has proved an able understudy.

The proverbial baton is set to be passed on again this weekend, as Golden Sixty (Aus) (Medaglia d'Oro) looks to stretch his current winning streak to 11 and his lifetime mark to 14 from 15 as the banker of the Longines Hong Kong International Races meeting at Sha Tin Racecourse.

A $60,000 Keeneland September acquisition, Gaudeamus won the 2006 G2 Debutante S. for trainer Jim Bolger, but was winless in four starts as a 3-year-old, including the G1 Irish 1000 Guineas and G1 Irish Oaks and was the first horse ever acquired by Sheamus Mills. He bought the filly on behalf of former Moonee Valley chairman Bob Scarborough and his wife Rosemary's Victoria-based Wood Nook Farm. Gaudeamus arrived in Australia in foal to Pivotal (GB) to Southern Hemisphere time and went on to produce five foals to race for Wood Nook, including Listed Tasmanian Derby third Igitur (Aus) (Helmet {Aus}).

The Scarboroughs offered Gaudeamus in foal to Medaglia d'Oro on a Nov. 4 cover date at the 2015 Magic Millions National Broodmare Sale. Then 11 years of age, Gaudeamus, whose second dam includes European champions Bosra Sham (Woodman) and her full-brother Hector Protector as well as G1 Poule d'Essai des Poulains hero Shanghai (Procida), was hammered down to Josh Hutchins Bloodstock for A$160,000. The mare produced a Queensland-bred bay colt Oct. 14, 2015, and a year and three months later when offered by the Hutchins family's Element Park agency at the Magic Millions Gold Coast sale, he fetched A$120,000 from Sam Beatson's Riversley Park and Ben Foote's Enigma Farm, both New Zealand-based operations.

“He was a good-moving, athletic yearling with a great head and eye on him and looked like he would grow into a lovely 3-year-old and oozed class,” Beatson recollected.

The colt was sent across the Tasman for the next part of his preparation.

A Fast Start For Riversley Park…

Sam Beatson was always destined for a career that included horses. A descendant of John Beatson, a successful amateur jockey and one of the founding members of the Hawke's Bay Jockey Club, his grandfather was George Beatson, a similarly successful amateur rider, owner/breeder and racing administrator. Sam Beatson got started in show jumping from an early age, representing his native country in India and Australia, before relocating to Cambridge, where he started a breaking-in and pre-training business. He initially operated as Beatson Stables before going out on his own at Riversley Park in 2015.

The Medaglia d'Oro colt was the second most-expensive of five purchases made by Beatson and Foote at the Gold Coast sale nearly four years ago, and Beatson said the colt, who would ultimately be targeted at New Zealand Bloodstock's Ready To Run Sale in the springtime, grew up the right way over the ensuing 10 months.

“He developed along the path that I hoped he would,” said Beatson. “He grew and strengthened and matured into the potential I saw in him early on.”

The Gaudeamus colt made an exceptionally racy impression during his under-tack preview, clocking :10.48 (see below) for 200 metres, a time well above average for the sale.

“He moved across the ground well with a great galloping action, doing it all in a nice time,” Beatson commented.

Consigned by Riversley Park to the RTR sale–also responsible for 2019 G1 Hong Kong Sprint hero Beat The Clock (Aus) (Hinchinbrook {Aus})–as lot 136 and by the sire of that year's G1 Golden Slipper hero Vancouver (Aus), the colt was ticketed for Hong Kong after trainer Francis Lui signed the winning ticket at NZ$300,000.

“When I buy horses I try to identify horses that would be suited for Hong Kong, so I was confident that he would perform up there,” Beatson said.

And perform he has.

The Meteoric Rise of Golden Sixty…

Golden Sixty arrived in Hong Kong in October 2018 and his trackwork and trials were such that the betting public sent him away as the $27 (17-10) favorite for a Class 4 over 1200 meters and he obliged with a decisive turn of foot that has since become his trademark (video) en route to a cheeky score Mar. 31, 2019. He would go on to add a pair of wins in Class 3 before a below-par 10th to close the season in July.

He hasn't lost since. Golden Sixty made the G3 Chinese Club Challenge H. his first success at Pattern level last Jan. 1, then joined the star-crossed Rapper Dragon (Aus) (Street Boss) as the only horses to sweep the 4-Year-Old Classics with a thrilling victory in the BMW Hong Kong Derby over the 2000 meters (video). Put away for the year instead of pressing on to either the G1 QE II Cup or the G1 Champions Mile, he has rattled off three straight this term, all at odds-on, including a facile defeat of Ka Ying Star (GB) (Cityscape {GB}) in the G2 Jockey Club Mile. Vincent Ho has been in the boot for each of his 14 starts.

Beatson believed from his sales prep that he had a quick horse on his hands. But was he one that could see out a classic trip?

“I knew he had a lot of speed so he would suit running a mile, but I was confident he would make the Derby distance in Hong Kong,” he opined.

Beatson has been around a good horse or two in his career, having had a hand in the careers of horses like G1 Melbourne Cup hero Prince of Penzance (NZ), New Zealand Horse of the Year and six-time Australian Group 1 winner Dundeel (NZ) and Lucia Valentina (NZ), a treble top-level winner. He reckons that Golden Sixty can become the best of that bunch at the weekend.

“It's fantastic to be associated with Golden Sixty, we always thought he was special and for him to be doing what he is doing on the track just reiterates my thoughts of what a special horse he is,” Beatson said. “I had very high expectations of him, you always dream of selling a horse of his caliber, so I hope he can carry on his great performances. To have bought, prepared and sold a horse that is competing in the Hong Kong international Mile is fantastic. But if he wins, it would be a huge result for Riversley Park.”